July 2018 had a classic variety of summer weather. There was: 1) an ongoing heatwave to begin the month; 2) dry conditions for the most part in the first half of the month; 3) some warm, exceedingly humid conditions with widespread, at times heavy, showers the second half of the month (courtesy of the subtropics); and 4) some “top 10” sunny dry days following several cold front passages (thank you Canada).

July precipitation averaged 5.98” across New Jersey. This is 1.41” above the 1981–2010 average and ranks as the 24th wettest July since 1895. Northern NJ was wetter than southern areas. From Hunterdon, Somerset and Union counties northward, precipitation averaged 7.17”, which is 2.42” above average. From Mercer, Middlesex and Monmouth southward on average 5.29” accumulated, which is 0.80” above average.

The month began with New Jersey in the midst of a classic heatwave. Daytime maximum temperatures exceeding 90° commenced on June 28th in scattered inland sections of south Jersey, arriving most elsewhere on the 29th. The heat continued through July 5th, with most of NJ exceeding 90° for five consecutive days, and some spots for as many as eight. The 1st found Oswego Lake (Burlington) and Toms River (Ocean) topping out at 99° and 36 NJWxNet stations from 95°–98°. Pennsauken (Camden) reached 100° on the 2nd, with 36 stations from 95°–98°. Columbus (Burlington), Mansfield (Burlington), and Sewell (Gloucester) simmered at 99° on the 3rd, with 22 stations from 95°–98°. Each day brought more humidity, with dangerous heat indices as high as 105°–110° on several days. By the 4th, there was enough atmospheric instability to generate more clouds and scattered thunderstorms. This kept some stations under 90°, while four made it as high as 94°. The 5th heated up a bit more, with Pennsauken at 96°, Mansfield 95°, and 32 stations from 90°–94°. A cold front moved through on the 6th, bringing little to no rain to northern and southern areas, but over a half inch to much of central NJ, especially along the Interstate 195 corridor, where a few locations picked up over 2.00”. This ushered in one of the nicest July weather weekends one can imagine for NJ.


Table 2. The number of five day or longer heatwaves with maximum temperatures of 90° or greater at New Brunswick for each decade through July 2018.

There were 16 July days with maximum temperatures at one or more NJWxNet station of 90° or higher. Beyond the first five already mentioned, the heat was back on by the 9th, when Mansfield reached 91° and Haworth (Bergen), Pennsauken, and Stewartsville (Warren) each made it to 90°. Oswego Lake rose to 96° and Pennsauken and Vineland (Cumberland) to 95° on the 10th. The 93° mark was achieved by Mansfield, Vineland, and Woodbine (Cape May). Mansfield reached 90° on the 13th and 93° on the 14th, on the second day accompanied by 92° maximums at Jersey City (Hudson) and Pennsauken. The 16th brought more heat and increasing humidity levels. The maximum temperature was 90° or higher at 46 NJWxNet stations, topping out at 97° in Mansfield and Vineland. 96° was reached in Piney Hollow (Gloucester), Red Lion (Burlington), and Sewell. Highs on the 17th reached 97° at Upper Deerfield (Cumberland) and South Harrison (Gloucester), and 96° in Mannington (Salem), Vineland, and Greenwich (Cumberland). Mansfield made it to 90° on the 18th.

High levels of humidity, clouds, and showers kept highs in the 80°s from the 19th–25th, however, enough heat crept back into the picture to give Lower Alloways Creek a 90° maximum on the 26th and Cream Ridge (Monmouth), Hawthorne (Passaic), Holmdel (Monmouth), and Vineland maxes of 91° on the 27th. The final 90°+ day occurred on the 28th, with Oswego Lake (90°) the only station to reach that mark. The final three days of July featured daytime maximums in the 70°s and 80°s, providing a comfortable end to the month by July standards.

Following a cold frontal passage on the 17th, cool nights returned from the 18th–22nd. Pequest dipped to 55° on the 18th, with the 19th a chillier morning at Pequest at 47°, Basking Ridge 49°, Kingwood 50°, and 31 NJWxNet stations from 52°–59°. The mildest that morning was 67° at the coastal locations of Seaside Heights and Atlantic City Marina. Basking Ridge, Pequest, and Berkeley Township fell to 52° on the 20th, but Seaside Heights only got down to 70°. Howell (Monmouth), Basking Ridge, and Berkeley Township bottomed out at 54° on the 21st. In northwestern Sussex County, the 22nd brought lows of 57° to High Point Monument, 58° at High Point, and 59° in Wantage.

July brought above-average precipitation to all three of NJ’s climate regions, though the heaviest totals were generally found in northern areas. Among the wettest stations were Woodbridge with 10.24” (Middlesex; much falling in a 27th deluge discussed below), Manchester Township (Ocean) 10.06”, Highland Lakes (Sussex) 9.71”, Brick Township (Ocean) 9.66”, and Roxbury Township (Morris) 9.65”. There were 14 days during July that resulted in an inch or more rain falling at one or more locations around NJ.

While most areas of the state experienced above, or at least close to, average precipitation, some areas in the far south ended the month with somewhat below-average rainfall. Among those were Franklin Township (Gloucester) with 2.70”, Pitman (Gloucester) 2.90”, Mullica Hill (Gloucester) 2.91”, Ocean City (Cape May) 3.15”, and Pennsauken 3.17”. A relatively dry 3.48” total was found in Franklin Township in Somerset County, while just across town, another station had 6.66”, demonstrating the considerable variability that can occur with summertime rainfall.

The afternoon of the 3rd brought showers and thunderstorms mostly to northeast and west-central portions of the state. West Deptford (Gloucester) saw the most rain with 2.79”. West Caldwell (Essex) followed with 2.08”, Linden (Union) 2.06”, and Hamilton (Mercer) 2.01”. Little to no rain fell in the northwest, along the coast, or in the south. Winds dropped trees on cars in Bergen and Essex, and five other counties reported tree damage. Storms returned on the 4th, this time only in the northwest. Pequest caught 1.83”, Randolph Township (Morris) 1.48”, and White Township (Warren) 0.86”. Some trees were reported down in Warren County. As the heat finally broke, pre-dawn to mid-morning storms on the 6th doused both Cream Ridge and Hamilton (Mercer) with 2.47”, Point Pleasant with 2.10”, both East Windsor (Mercer) and Brick Township 1.86”, and Jackson Township (Ocean) 1.85”. The Interstate 195 corridor, especially western areas, generally saw 1.00”–2.00”, with totals within a few tenths of 0.50” in central Burlington, eastern Camden counties, and from Hunterdon northeastward into Bergen County.

Following a week of dry weather across the state, thunderstorms returned to the northern tier late in the evening of the 14th into the pre-dawn hours of the 15th, followed by another round that went through central areas in the morning. Fredon Township (Sussex) received 1.95”, Palisades Park (Bergen) 1.76”, Blairstown (Warren) 1.76”, River Edge (Bergen) 1.62”, and West Milford (Passaic) 1.56”. Totals were generally 0.25”–0.50” in central areas.

Rain soon returned, with a line of thunderstorms progressing southeastward through most of the state during the afternoon of the 17th. A weaker late-evening line of showers once again dampened the northwest. Drenching totals in Ocean County included 4.34” and 3.46” at two Toms River stations, 3.63”, 3.62”, and 4.06” observations in Brick Township, 3.62” at Point Pleasant Beach, and 3.33” in Lacey Township. Of the 220 CoCoRaHS reports from across the state, 10 eclipsed 3.00”, 13 were from 2.00”–2.99”, and 81 were from 1.00”–1.99” (Figure 1). Along with Ocean County, some 2.00”+ totals were found in Mercer and Monmouth counties, with other totals exceeding 1.00” scattered across the state. The southwest corner at best caught several tenths of an inch. Tree damage was reported in Hudson, Essex, and Middlesex counties. 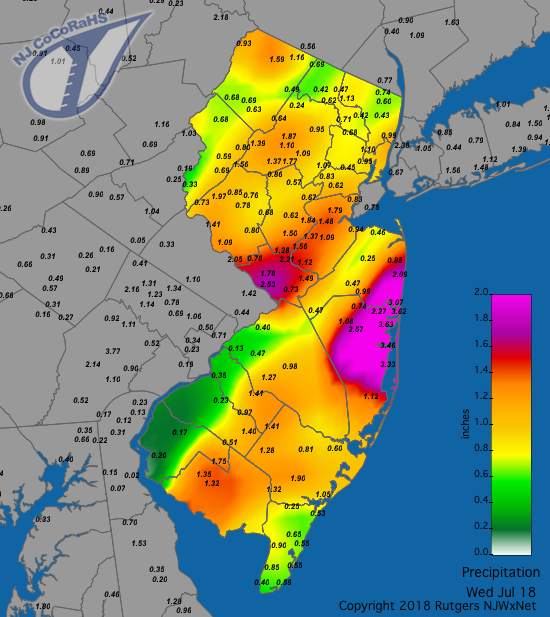 An unseasonable nor’easter moved up the East Coast on the 21st–22nd. Gusty winds and heavy rain fell across the Garden State, and despite morning sun, the flow off the Atlantic kept high temperatures on the 21st in the 70°s. Wind gusts on the 21st topped out at 41 mph in Sea Girt (Monmouth) and Seaside Heights and 40 mph in Mullica Township (Atlantic). The early morning hours of the 22nd brought gusts to 58 mph at Tuckerton (Ocean), 56 mph in Seaside Heights, 48 mph in Sea Girt, 46 mph in Harvey Cedars (Ocean), and gusts from 40 mph–43 mph at four NJWxNet stations, with many others gusting in the 30 mph–39 mph range. Once this system moved through, a moisture-rich flow became established from the subtropics up the East Coast, which did not fully lose its grip on the region until the 29th. For New Jersey, this meant a week of daytime highs in the 80°s and nights in the warm 70°s, accompanied by excessive levels of humidity and frequent scattered showers. An examination of morning CoCoRaHS reports for each day of the week found the heaviest totals in the far south from the nor’easter, and thereafter, mainly in northern counties. Weekly totals reported over the seven mornings from the 22nd–28th topped out at 8.12” in Woodbridge and 7.45” at Roxbury Township (Morris), with 45 locations accumulating at least 5.00”. The least rainy locations were Long Branch (Monmouth) with 1.80” and Winslow (Camden) with 1.86”, each still respectable summer weekly totals! The top morning reports on the 22nd included 3.28” in Wildwood Crest (Cape May) and 2.95” at Middle Township (Cape May). Subsequent daily maximums include; 23rd: Roxbury Township 2.38”, Randolph Township (Morris) 1.99”; 24th: Sussex (Sussex) 2.08”, Franklin (Sussex) 2.05”; 25th: Stockton (Hunterdon) 2.06” and 1.93”, Rockaway Township (Morris) 1.92”; 26th: Ringwood (Passaic) 2.21”, Mt. Olive (Morris) 2.10”; 27th: Pittsgrove (Salem) 0.23”; and 28th: Woodbridge 5.57”, Carteret (Middlesex) 4.20”, Greenwich (Cumberland) 3.18”.

The most serious situation associated with this rainy week occurred at rush hour on the evening of the 27th in northeastern Middlesex County. Close to where the NJ Turnpike, Garden State Parkway, and Interstate 287/Route 440 converge, a persistent, stalled thunderstorm produced as much as 5.57” inches mainly between 4:30–7:00PM (Figure 2). This resulted in a number of water rescues of stranded motorists, road damage, and some home foundations compromised. Fortunately, there were no reports of serious injuries. 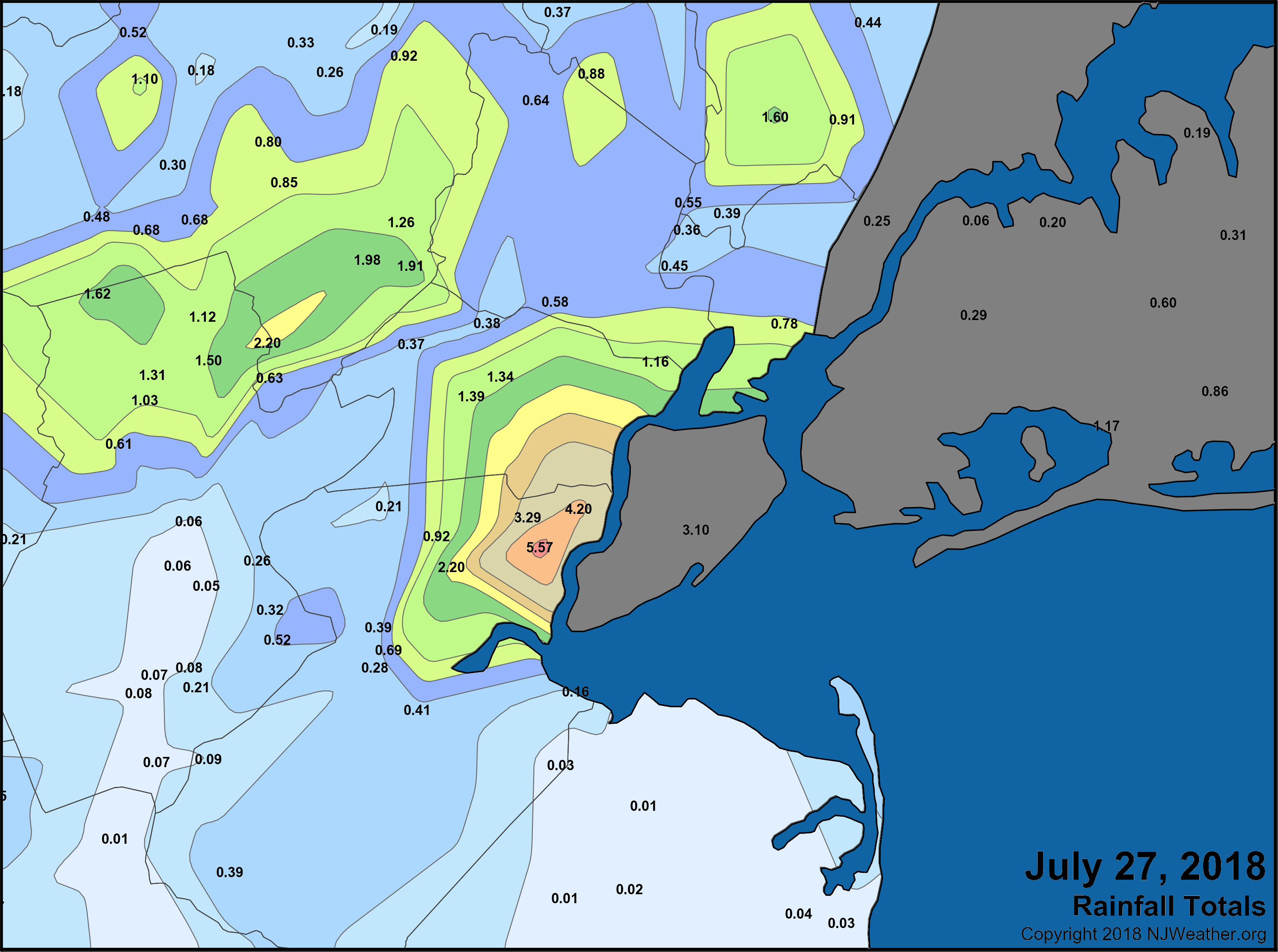 Figure 2. Rainfall from July 27th, depicting where the heaviest rains fell. Observations are comprised of reports from CoCoRaHS, NWS Coop, and NJWxNet stations.

Aside from the previously-reported gusts on the 21st–22nd, winds reached 40 mph or higher at West Deptford (Gloucester) with a gust of 45 mph and Moorestown (Burlington) 42 mph. On the 17th, Haworth reached 52 mph, Fortescue (Cumberland) 44 mph, and Sea Girt 43 mph. The 23rd saw the newest NJWxNet station in Lower Alloways Creek Township (Salem) peak at 43 mph and Fortescue reach 40 mph. Fortescue topped out at 49 mph on the 25th. The highest barometric pressure during July occurred on the 8th with values from 30.35”–30.40”. The lowest pressure was found on the 22nd, in the range of 29.60”–29.70”.