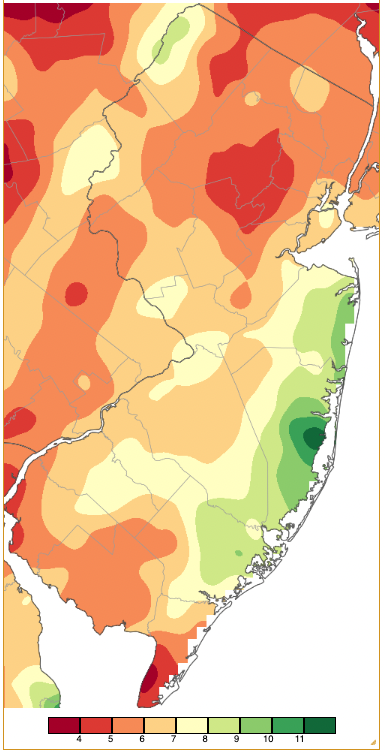 Figure 1. October 2022 precipitation across New Jersey based on a PRISM (Oregon State University) analysis generated using NWS Cooperative and CoCoRaHS observations from 8 AM on September 30th to 8 AM on October 31st. Note the scale in full inches at the bottom of the map. Totals range from 3.00–4.00” (dark red) to 12.00”–13.00” (dark green).

The first and most notable storm event of the month commenced late on September 30th as the remnants of Hurricane Ian moved into the Mid-Atlantic region. This proved to be a multi-day event as the system stalled and meandered over land and sea into October 5th. Copious rains fell over much of the state. Beginning in the south, the morning of the 1st saw heavy rain fall in much of this area, spreading to central locales in the PM hours. Heavy rain returned to the south overnight into the 3rd and then was on and off across most of NJ during the day and evening. The storm system drifted north on the 4th, with rain concentrated in northern and central regions. Thunder accompanied the rain that fell heavily into the early hours of the 5th. By the time the storm departed, as much as 9.60” fell in Lacey Township, Berkeley Township 9.57”, and Long Beach Township (Ocean) 8.72”. Nine CoCoRaHS stations caught 8.00”–9.60”, 36 saw from 6.00”–7.99”, 124 from 4.00”–5.99”, and 112 from 2.00”–3.99”. Westfield (Union) received the least at 2.27” flowed by Hackettstown (Warren) with 2.28”. Figure 2 shows rainfall totals throughout NJ and adjacent states based on reports from multiple networks. 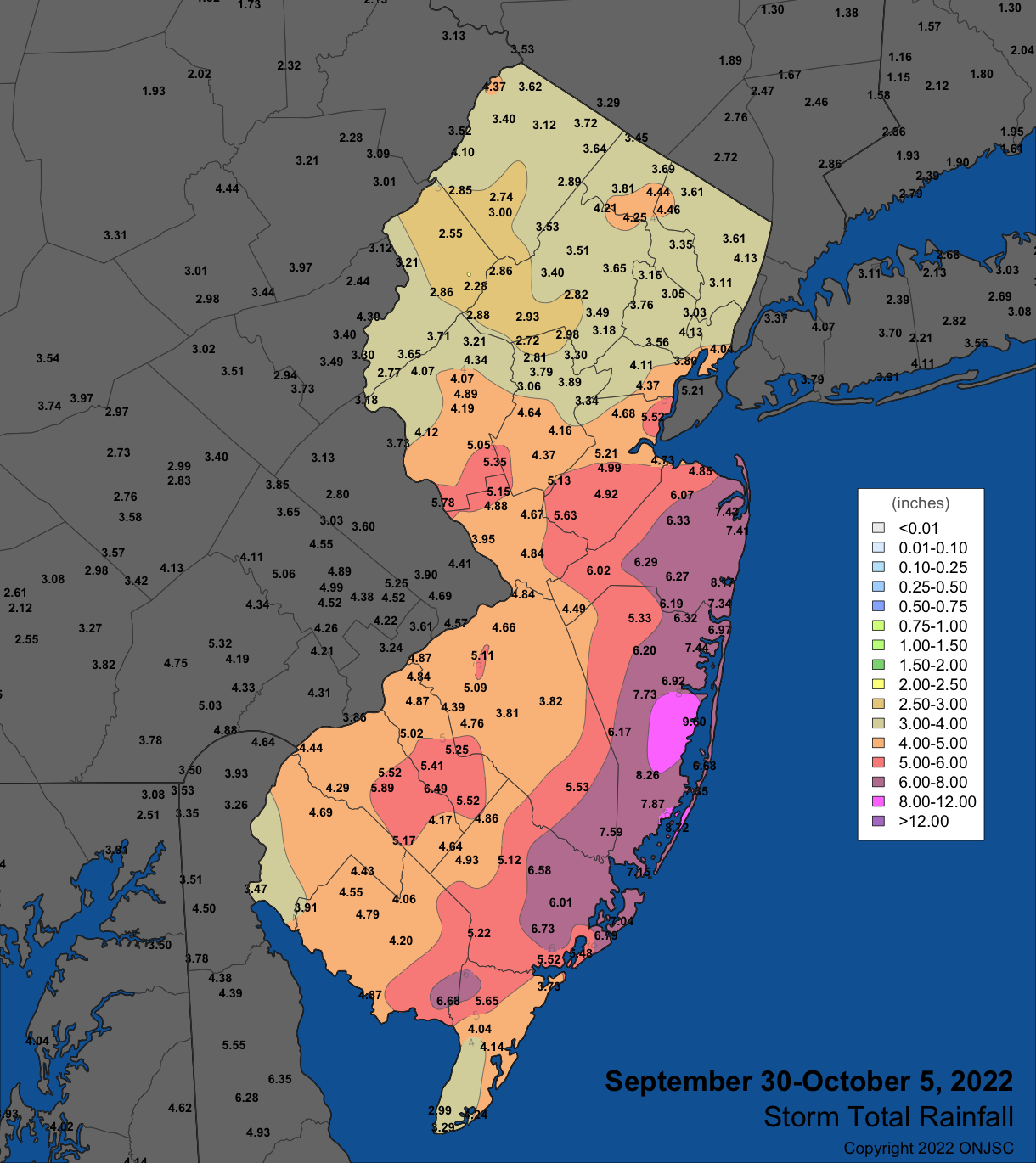 Figure 2. Precipitation across New Jersey from the evening of September 30th through morning of October 5th based on data from NWS Cooperative, CoCoRaHS, and Rutgers NJ Weather Network observations. Note the scale in inches on the map.

The storm was accompanied by persistent strong winds in coastal areas. Wind gusts on the 1st were as strong as 50 mph at Harvey Cedars (Ocean), Atlantic City Marina (Atlantic) 49 mph, Little Egg Harbor Township (Ocean) 44 mph, Sea Girt (Monmouth) and Seaside Heights (Ocean) each 43 mph, and Fortescue (Cumberland) 41 mph. These six stations gusted from 59 mph at Atlantic City Marina to 43 mph in Fortescue on the 2nd. Little Egg Harbor Township led the way at 58 mph on the 3rd, with Fortescue falling below 40 mph while the other four locations hit 49 mph to 45 mph. As winds slowly slackened, the 4th brought gusts to 45 mph in Harvey Cedars, 41 mph at Little Egg Harbor Township, and 40 mph at Sea Girt. The easterly nature of the winds pushed a considerable amount of water onto the beaches and into the back bays. Moderate to minor flooding occurred during multiple high tides from the 1st through the 4th as seen in Figure 3 and there was substantial beach erosion. 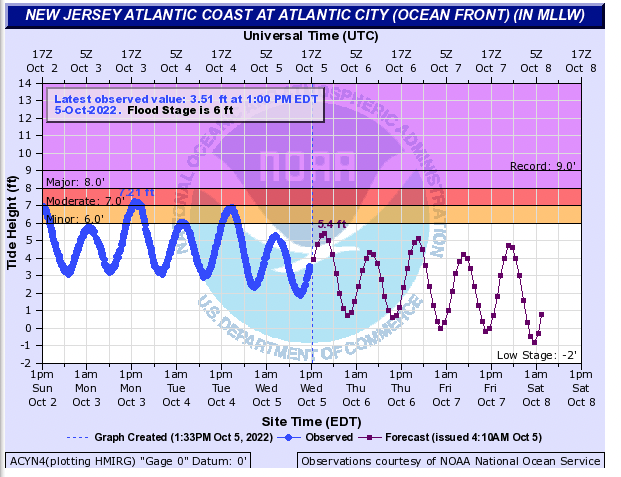 As the storm began to subside and started moving out to sea, a visible satellite image on the morning of the 5th shows the persistent cyclonic circulation of the storm (Figure 4). A close up of this image over NJ shows several breaks in the clouds (Figure 5), confirmed by the higher levels of solar radiation reaching the surface in the northeast and far south (Figure 6). This was a welcome end to what was a tumultuous start to the month. Adding insult to injury, high temperatures were upwards of 20° below normal due to the onshore winds and dense clouds. 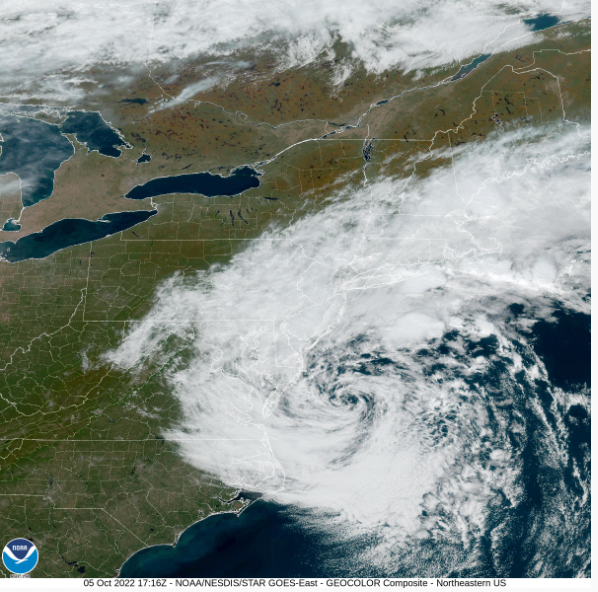 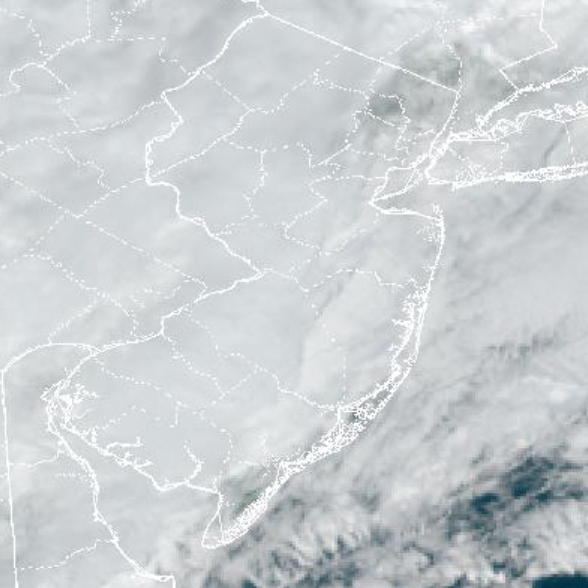 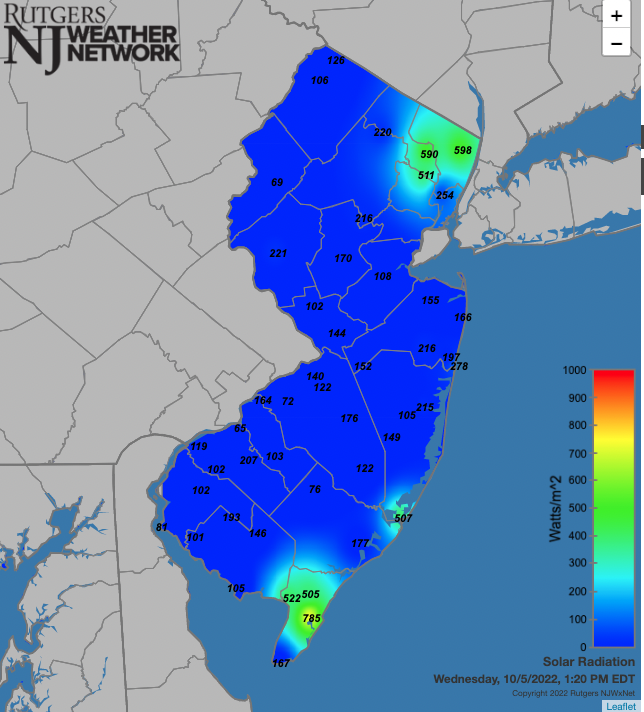 Dry conditions prevailed for the next week before another system moved into the state. This time, it was the northwest that received the most rain and the south the least (Figure 7). The bulk of the rain fell during the late afternoon and evening of the 13th, with Knowlton Township (Warren) topping the list with 3.24”, Montague (Sussex) 3.13”, Newton (Sussex) 3.00”, and Blairstown (Warren) 2.93”. Of 275 CoCoRaHS reports, 17 were from 2.00”–3.24” and 60 from 1.00”–1.99”, certainly a much less widespread event than the early-month storm. 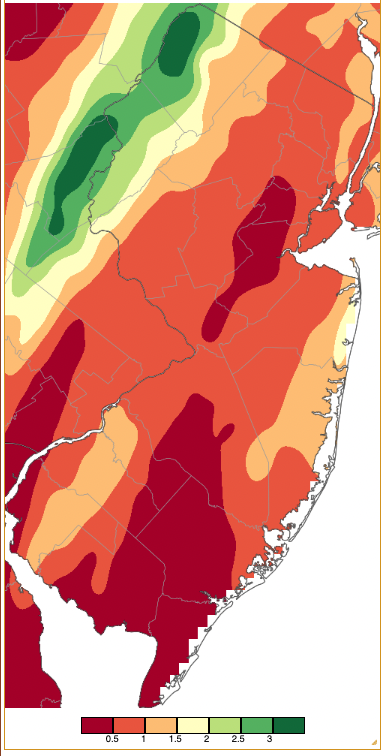 Figure 7. Precipitation across New Jersey from 8 AM on October 12th through 8 AM October 14th based on a PRISM (Oregon State University) analysis generated using generated using NWS Cooperative and CoCoRaHS observations. Note the scale in inches beneath the map.

A modest event preceded and accompanied a late afternoon to evening cold front passage on the 17th. Riverside (Burlington) caught 0.87”, Mansfield (Burlington) 0.77”, and Collingswood (Camden) 0.75”. Cold, dry air followed the front, with the next rain event not occurring until the 23rd. First the south received light daytime and heavy night rain into the early 24th. Later on the 24th more widespread rain brought light to moderate totals to much of NJ. Event totals were as large as 2.81” in Southampton Township (Burlington), Egg Harbor City (Atlantic) 2.37”, Egg Harbor Township (Atlantic) 2.21”, and Sea Isle City (Cape May) 2.18”. 87 stations received 1.00”–2.81” (Figure 8). 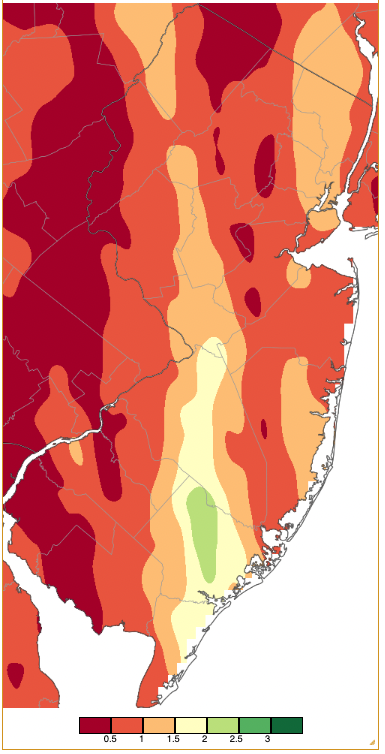 Figure 8. Precipitation across New Jersey from 8 AM on October 23rd through 8 AM October 26th based on a PRISM (Oregon State University) analysis generated using generated using NWS Cooperative and CoCoRaHS observations. Note the scale in inches beneath the map.

The month ended with a little to no rain falling, though fog occurred on multiple mornings, particularly on the 31st when visibility was greatly diminished over scattered areas, particularly in central NJ.

The only day outside of the 1st to 4th where an NJWxNet station had a wind gust exceeding 40 mph was a 45-mph gust at High Point Monument (Sussex) on the 27th. The lowest barometric pressures of the month were not associated with the remnants of Ian. Rather they were from the system that brought a cold front and modest rain through the state on the 17th into early on the 18th. Pressures were in the 29.55”–29.65” range during this event. Highest pressures for the month occurred on the 28th, ranging from 30.45”–30.60” on the 28th.

The wet month put a major dent into drought conditions across the state. The end of September found the National Drought Monitor classifying almost all of the state as being Abnormally Dry (D0), in Moderate Drought (D1), or in Severe Drought (D2; see map in the September report). By the end of October, only the Highlands and the Cape May peninsula were in D1, with surrounding areas and a lingering section of Middlesex and Monmouth counties in D0 (Figure 9). Along with the rainfall, soil moisture and groundwater levels began to rise, as did streamflow and reservoir levels. Still, the NJ Department of Environmental Protection maintained a Drought Watch across all of the state, waiting to be convinced that the extended dry period over the summer and early fall was indeed a thing of the past. 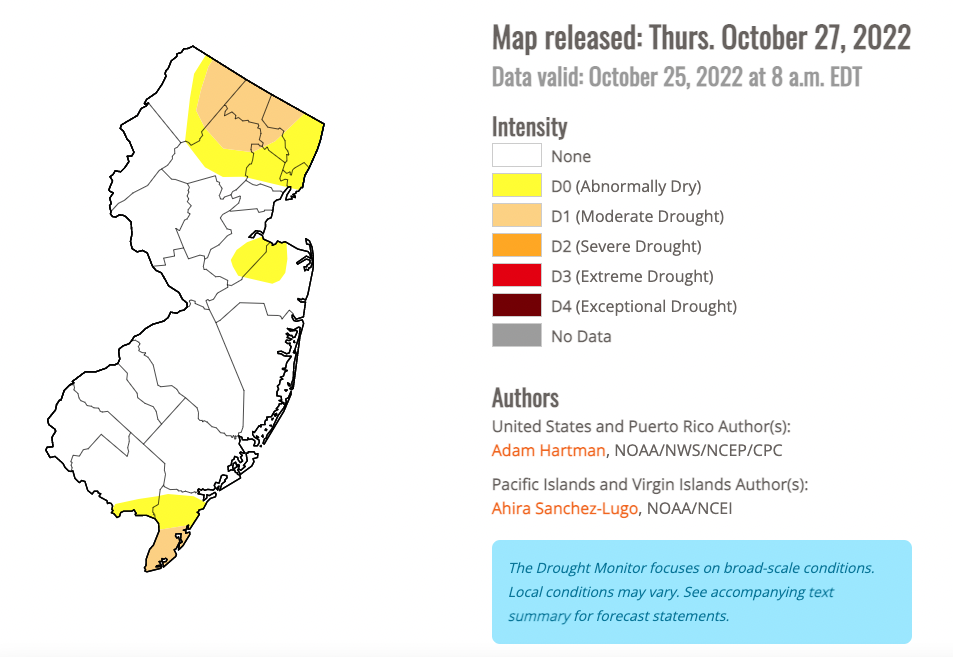 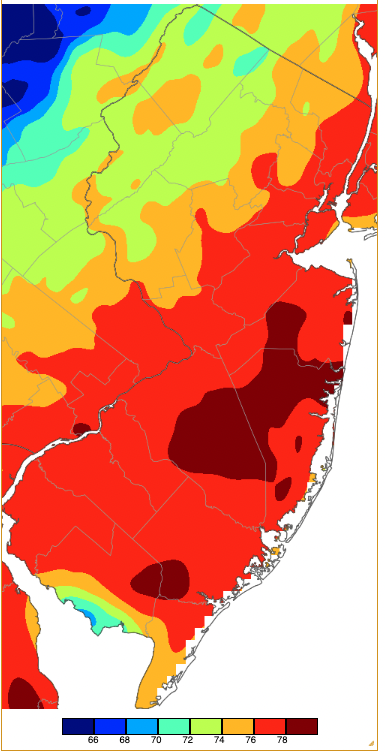 The first freezing temperatures of the season at NJWxNet locations occurred on the 8th when Walpack (Sussex) and Sandyston (Sussex) each fell to 31° shortly before midnight. The next morning found Sandyston and Pequest (Warren) each bottoming out at 28°, Walpack 29°, and 11 locations from 30°–32°. Meanwhile, West Cape May only fell to 52°. Oswego Lake (Burlington) and Hopewell Township (Mercer) were each 32° on the 10th. 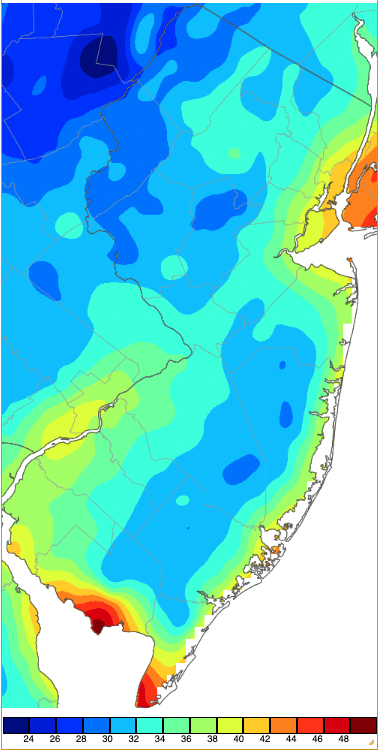 By the end of October, 41 NJWxNet stations had experienced a freeze this fall. Seventeen stations had fallen into the 33°–39° range, while eight coastal locations had the adjacent waters of the Atlantic and Delaware Bay helping keep minimums no lower than the low-to-mid 40°s. Down the coast and into the Bay they include Point Pleasant, Seaside Heights, Harvey Cedars, Little Egg Harbor Township, Atlantic City Marina, West Cape May, Fortescue, and Lower Alloways Creek Township. Of interest inland, the two highest elevation stations in the network, High Point Monument only fell as low as 32° on one day and Vernon Township never dropped below 34°. Also, Parsippany (Morris), near a hilltop in Morris County, only fell to 35°. This is indicative of calm clear nights with cold dense air sliding off the higher elevations and settling into valleys.