Unlike the abnormal warmth of March, the average April temperature of 50.7° was 0.5° below normal. This ranks as the 48th mildest on record.

This past month we welcomed two new NJWxNet stations into the fold. Fortescue is located at waters edge along Delaware Bay in Cumberland County and Mannington Township is in Salem County.

April temperatures fluctuated widely from day to day, from morning to afternoon, and on some occasions at a specific time across the state. An example of the latter is seen in Figure 1. 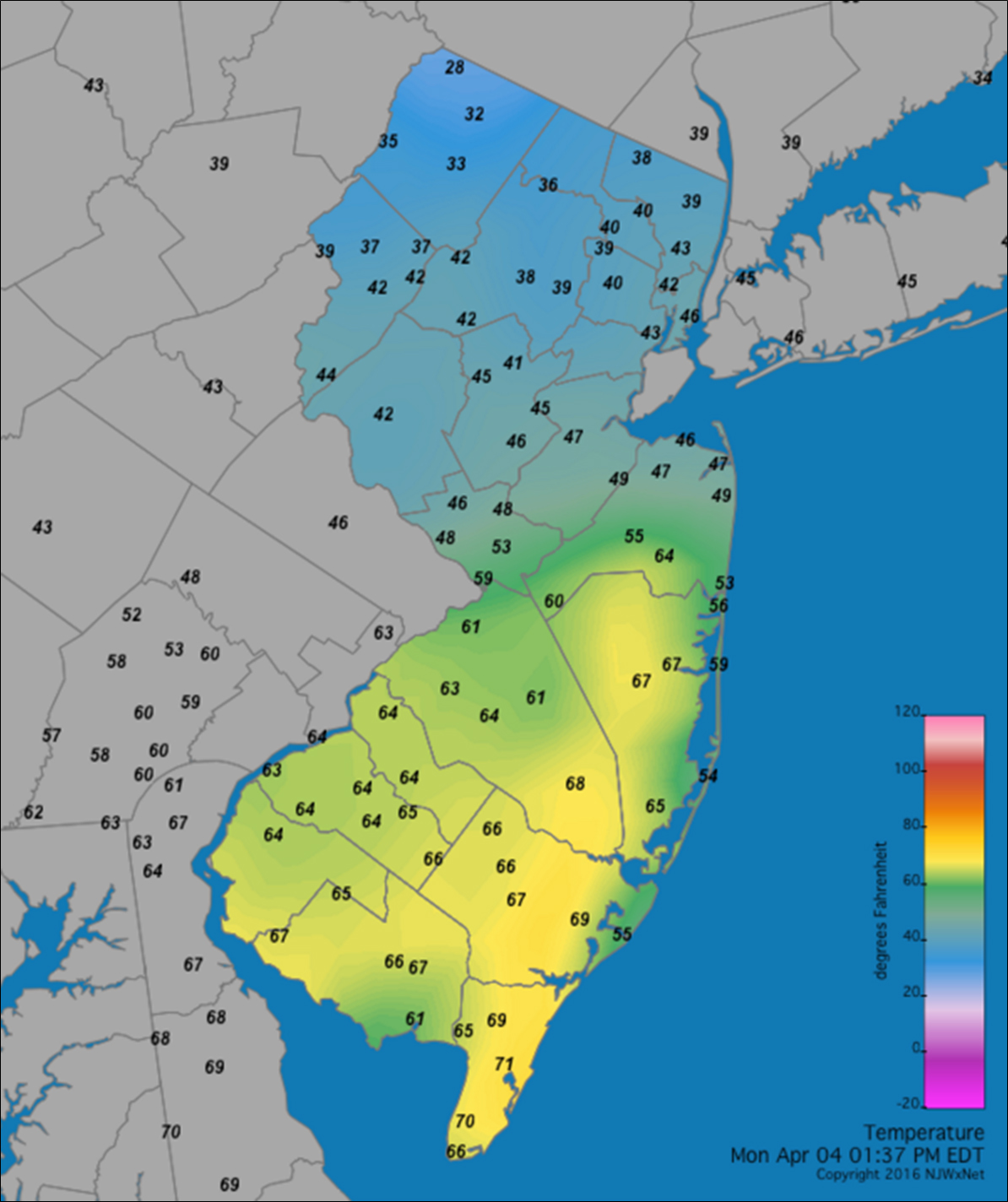 Figure 1. Temperatures ranged from 28° to 71° across New Jersey at 1:37 PM EDT on April 4, 2016. Rain and snow were falling in the north, while the sun was shining in the south. A modest sea breeze was also in progress along the coast.

The temperature fell to 32° or colder at one or more station on 19 April days. Just two days after seeing an 80° reading in the state, High Point Monument fell to 20° on the 3rd. High Point (Sussex) bottomed out at 24° and Walpack 25°. Nine other days fell to at least 25°, continuing on the 4th with the Monument station again down to 20° and High Point to 22°. The 5th was the last day this season when all NJWxNet stations fell below freezing. High Point Monument led the way at 15°, High Point 16°, and Walpack 18°. West Cape May (Cape May) was “mildest” at 31°. The 6th was colder, with the Monument down to 14°, Pequest (Warren) and Berkeley Township (Ocean) at 15°, and nine stations from 16°–19°. Atlantic City Marina (Atlantic) and Harvey Cedars only fell to 33°.

The wettest locations in the state in April were generally found along the southern coast. Despite this, totals there barely managed to get close to the April norm. Ocean City (Cape May) topped the list of CoCoRaHS stations with 3.94”. This was followed by Lower Township (Cape May) at 3.89”, Wildwood Crest (Cape May) 3.77”, Estell Manor (Atlantic) 3.49”, and Pittsgrove (Salem) 3.32”. On the low end was Edison (Middlesex) at 1.05”, then Franklin Township (Somerset) 1.17”, North Brunswick (Middlesex) 1.19”, Manville (Somerset) and Woodbridge (Middlesex) each at 1.29”, and Cranford (Union) 1.30”.

Off and on rain with some scattered thunderstorms fell across NJ during the late afternoon and evening of the 1st into the 2nd. Hail was observed in Lebanon (Hunterdon) and Morris Plains (Morris). Rain totaled as much as 1.00” in Ocean City, 0.82” at Long Hill Township (Morris), and 0.81” in both Wildwood Crest and Warren Township (Somerset). There was some wind damage in Raritan (Somerset). A powerful storm system visited the state during the evening of the 2nd into the morning of the 3rd. Severe thunderstorms produced a microburst in Cumberland County, causing considerable damage in Bridgeton and Hopewell. There were reports of pea size hail (with some stones up to 3/8”) in ten counties (other counties likely saw hail too). Lightning started house fires in Bergen County. Cold air moved into the far north and turned rain to snow, with Highland Lakes (Sussex) catching 2.7”, West Milford (Passaic) 2.4”, and Wantage (Sussex) 1.2”. Rainfall reached 0.83” in Estell Manor, 0.79” at Point Pleasant Beach (Ocean), and 0.78” in Lower Township. Additionally, damaging winds howled throughout the state, with ten NJWxNet stations gusting to 50 mph or higher (see wind report below).

Widespread rain was heaviest in the north as it fell during the morning and afternoon of the 4th. Glen Gardner (Hunterdon) and Oxford (Warren) each picked up 0.53”, and River Edge (Bergen) and Harrison (Hudson) saw 0.52”. Daytime rain on the 7th brought southwest and northwest areas about 0.50”, with less than a tenth of an inch along the coast. Mansfield (Warren) received 0.71”, Wantage 0.66”, and Holland Township (Hunterdon) 0.63”.

A clipper system tracked just south of NJ on the 9th, bringing a rather quick shot of rain and snow, mainly to the south. When falling heavily, slushy snow quickly accumulated on natural surfaces and even some roadways. Franklin Township (Gloucester) caught 3.5”, Mullica Hill (Gloucester) and Swedesboro (Gloucester) each 3.0”, Port Norris (Cumberland) 3.0”, Ocean City 3.2”, three Atlantic County stations 2.0”, Somerdale (Camden) 2.0”, Pittsgrove (Salem) 1.5”, and Medford Lakes (Burlington) 1.1”. Rain and melted snow totaled 0.75”–1.00” in much of the far south, tapering to a few tenths of an inch in central areas and less than a tenth in the north. Woodbine stations saw 1.20” and 1.25”, Ocean City 1.08”, and Linwood 0.96”.

A morning squall on the 12th delivered 0.62” to Ocean City, 0.56” at Liberty Township (Warren), and 0.49” to four locations in Warren and Hunterdon counties. Most of the state received 0.10”–0.30”. This was the last precipitation to fall in New Jersey until the evening of the 22nd. During this ten-day dry period, daytime temperatures were often warm, humidity levels low, and winds gusty. Red Flag Warnings were issued at times by the National Weather Service and unfortunately some wildfires occurred. One fire on the 19th in the vicinity of the Northeast Corridor rail line in Secaucus (Hudson) halted service on this critical route for several hours.

Rain returned during the evening of the 22nd into the afternoon of the 23rd. Moderate rain fell from Warren to Bergen counties and in Cape May County, with less elsewhere. Little Falls (Passaic) saw 0.78”, Upper Freehold (Monmouth) 0.75”, and West Caldwell (Essex) 0.69”. Rain fell in the south and north, mostly missing central counties, during the morning and afternoon of the 26th, accompanied by some thunder in the PM hours. Port Republic (Atlantic) saw 0.87”, Little Egg Harbor (Ocean) 0.81”, four Stafford (Ocean) locations 0.80”, 0.80”, 0.71” and 0.71”, and Bloomingdale (Passaic) 0.71”. Light rain during the afternoon and evening of the 29th brought 0.47” to Wildwood Crest and 0.46” to both Sea Isle City (Cape May) and Hamilton (Mercer).

Winds gusted to 40 mph or higher at one or more NJWxNet station on eleven April days. Logan Township (Gloucester) gusted to 54 mph on the 1st, with Wantage up to 40 mph. The 2nd saw Logan Township up to 55 mph, Woodstown (Salem) 47 mph, and Upper Deerfield (Cumberland) 44 mph.