Despite July and August typically being the wettest months of the year in New Jersey, their warmth usually results in evaporation rates exceeding rainfall. Thus, when heat ensues and rain is light for a few weeks—not uncommon in a Jersey summer—lawns, gardens, and fields require considerable irrigation to avoid wilting or browning. Such was not the case this past August and earlier in the summer, as rain was ample and quite timely in most areas and hot temperatures did not prevail for extended periods. More will be reported for the summer as a whole later in this report. For August in particular, the average of 5.06” of rain that fell across NJ was 0.96” above the 1981–2010 average. It ranked as the 41st wettest August since 1895 and the wettest since record wet conditions in 2011.

While the solar eclipse during the mid afternoon of the 21st was only 70%–75% complete in New Jersey, there was still a noticeable impact on NJ weather conditions. Daylong observations at the Mannington Township (Salem County) NJWxNet station on that partly cloudy day showed incoming solar radiation values around the 2:45 PM eclipse maximum falling to levels received at about 7:30 AM (Figure 1). At this time, the air temperature fell from about 83° to 79° (Figure 2). The second figure shows no impact on dew point temperature, thus relative humidity (not shown) increased several percent. These eclipse-induced changes were similar to those observed throughout New Jersey. 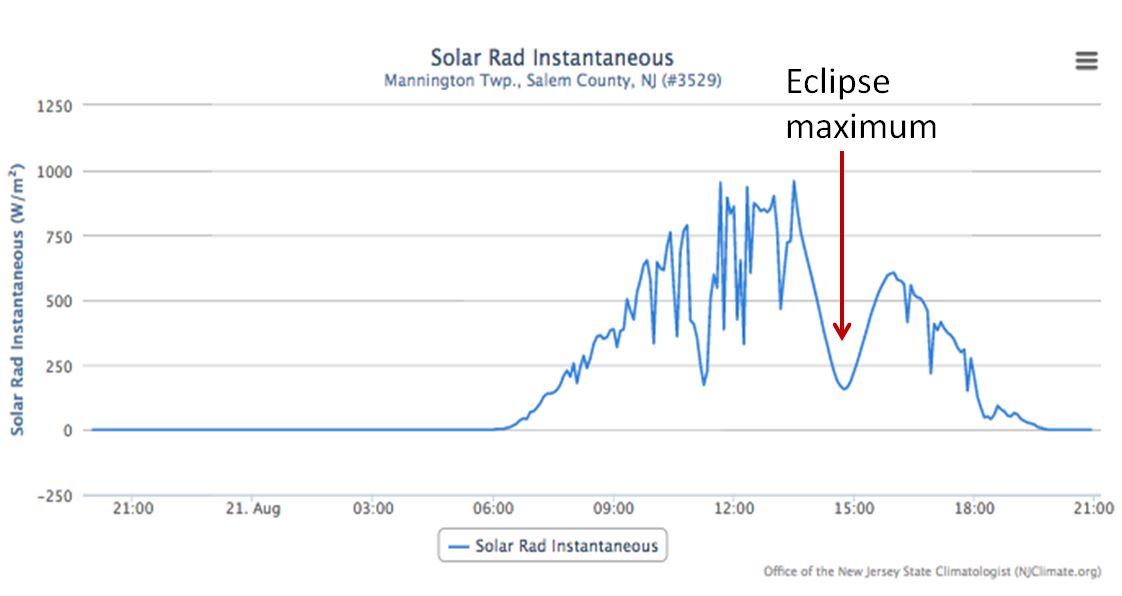 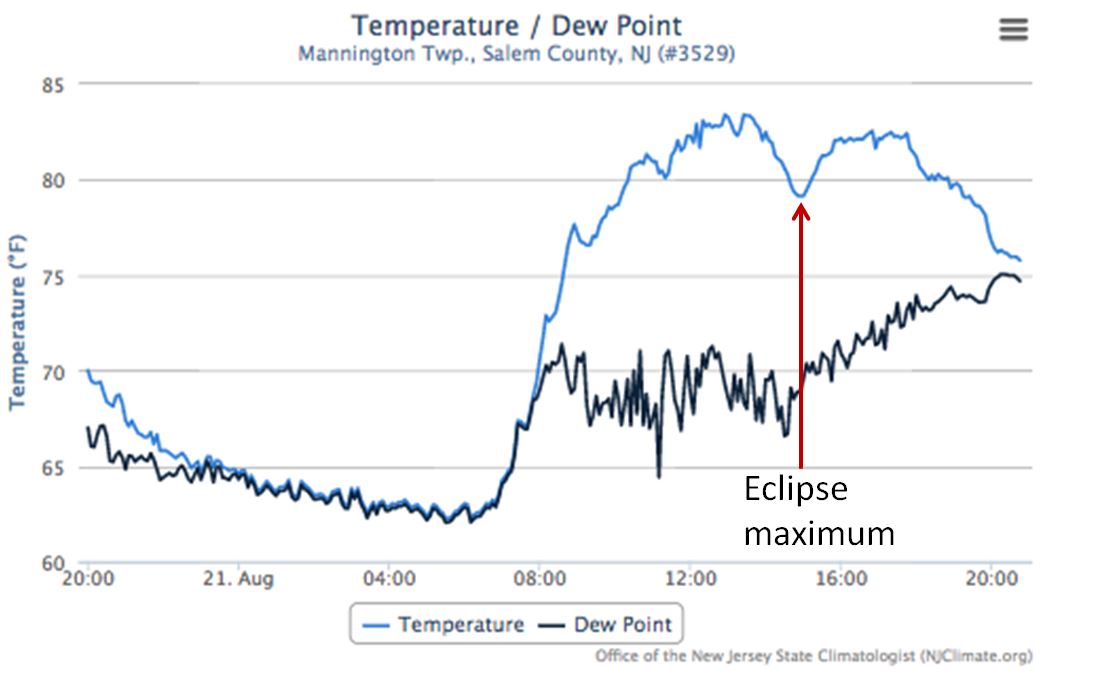 Figure 2. Surface air temperature (close to six feet above a grassy surface; blue line) and dew point temperature (back line) at Mannington Township, NJ, on August 21, 2017. Note the eclipse-lowered air temperature near 1445 (2:45 PM) without a notable change in dew point.

Just seven August days saw the temperature rise to at least 90° somewhere in NJ. Hawthorne (Passaic) reached 94° on the 1st to kick off the heat. Six stations were up to 92° and 27 of the 64 NJWxNet sites were between 90°–92°. High Point Monument (Sussex) was the cool spot at 80°. Sicklerville (Camden) was 91° and five stations were 90° on the 2nd. Haworth (Bergen) and Mansfield (Burlington) reached 90° on the 3rd, and Mansfield and Hamilton (Mercer) reached that mark on the 4th.

Eight rainfall events during August resulted in one or more stations receiving greater than 2.00”. These downpours were distributed throughout varying parts of the state, thus the highest total for the month only amounted to 9.12” in Burlington (Burlington), still about twice the normal August total. Central NJ also saw hefty totals of 8.24” in Manville (Somerset), 8.01” and 7.90” in Franklin Township (Somerset), 7.85” in New Brunswick (Middlesex), and 7.77” at Piscataway (Middlesex). The northern Highlands was driest, with just 3.01” falling in Bloomingdale (Passaic) and Boonton (Morris), 3.15” at Denville (Morris), and 3.36” in Oakland (Bergen). Wildwood Crest (Cape May) only saw 3.26”. The first rainfall event of the month was a localized one during the early evening of the 1st. A thunderstorm brought a wind gust to 54 mph at Pennsauken (Camden) and 2.10” of rain to Riverton (Burlington). This was the only report of rainfall over an inch, while Hamilton (Mercer) caught 0.59” and Ewing (Mercer) 0.58”. No other portion of the state saw rain.

An isolated storm just after dawn on the 2nd brought 1.50” of rain to Oceanport and 1.44” to Long Branch (Monmouth). Later that afternoon through the evening, storms became quite widespread across the state, some accompanied by small hail, with the wind gusting to 41 mph at Fortescue (Cumberland) and trees and power lines down at sites in at least six counties. Rice to pea size hail was reported at locations in Passaic, Hunterdon, Mercer, and Gloucester counties. Silas Little (Burlington) picked up 2.95” of rain, along with Monroe (Gloucester) 2.78”, Roxbury (Morris) 2.55”, Franklin Township (Gloucester) 2.49”, and New Brunswick 2.38” and 1.95” (two stations). Of the 215 CoCoRaHS stations reporting, 49 saw more than an inch. Heavy pockets included western Gloucester up to south central Burlington, as well as Middlesex, Morris, and Sussex counties. Little fell in scattered areas along the coast and in a thin band from western Hunterdon eastward to Union County.

Again, scattered late afternoon and evening thunderstorms roamed NJ on the 3rd, with some light showers persisting into the predawn hours of the 4th. A stationary storm over western Burlington County delivered a deluge of 4.58” in the town of Burlington, 2.79” in Mansfield, and 1.25” at Columbus, resulting in considerable flash flooding. Small hail was also reported in this and other storms, with trees and wires down in Burlington County. Much of the state received less than 0.25”, although up the Delaware Valley, Phillipsburg (Warren) received 1.12”, and at the western end of Raritan Bay, Woodbridge (Middlesex) caught 1.15”.

The 7th was an atypically cool and gloomy day for early August. Rain crept into western NJ in the predawn hours, with light to moderate rain overspreading the state throughout the day, tapering off during the evening to post midnight hours. The heaviest rain fell Cumberland County where Fortescue picked up 3.51” and Bivalve 2.67”, northward into Atlantic County, with Folsom at 2.71”, Buena Vista 2.68”, Mullica 2.57”, and Estell Manor 2.23”. West Cape May (Cape May) was also soaked with 2.31”, while all told, 64 CoCoRaHS stations received over an inch, including some in Somerset and Hunterdon counties, and 113 saw between 0.50”–0.99”. Just 32 stations only saw from 0.16” in Brick (Ocean) to 0.49” at several locations.

The fifth event of the month to deliver more than 2.00” of rain at one or more locations began with heavy rain in the northwest during the evening of the 11th into the morning of the 12th. Quite scattered rain fell during the day, with some heavier showers during the afternoon and evening in the far south. A swath of rain exceeding 1.50” fell from northern Warren (Blairstown 1.95”) through most of Sussex counties (Fredon Township 2.76”, Andover 2.56”, Hardyston 1.95”). Totals decreased to less than 0.50” once 20 miles southeast of this area, with much of central and southern NJ catching under 0.25”. That is until reaching far eastern Cumberland, southern Atlantic, and Cape May counties, where close to an inch fell, and Lower Township (Cape May) picked up 1.90” and Woodbine (Cape May) 1.37”.

The next soaking episode brought gloomy skies and very humid conditions across NJ from late evening on the 14th throughout the daylight hours of the 15th. The heaviest rain fell in swaths through Mercer-Somerset-Middlesex counties and Salem-Cumberland-northern Cape May/southern Atlantic counties. Fortescue caught 2.00”, Hopewell Township (Mercer) 1.64” and 1.21”, and Princeton (Mercer) 1.51” and 1.42”. Little rain fell north of Interstate 80 and in the Interstate 195 corridor.

Yet another widespread event came in two pulses on the 18th. The first, during the morning hours, drenched northeast Bergen and eastern Ocean counties. This was followed by a squall line that crossed NJ from west to east between about 5–8 PM, which delivered a 41 mph gust to Fortescue. Trees and wires were brought down in Hunterdon, Burlington, Middlesex, and Monmouth counties. All told, 37 of 188 reporting CoCoRaHS stations saw more than an inch of rain, with 80 between 0.50”–0.99”. Berkeley Township (Ocean) led the way with 2.97”. Three nearby Toms River (Ocean) stations caught 2.57”, 2.56”, and 1.97”, and Seaside Heights (Ocean) saw 2.13”. In Warren County, the town of Washington received 2.06” and nearby Washington Township 1.96”. Most of NJ received at least a few tenths of an inch, with the lowest amounts in northern Monmouth and Hunterdon counties, each close to the heaviest rain locations.

The eighth and final two-inch plus event of August arrived via a squall line that entered western and northern areas during the mid evening of the 22nd and departed the south in the pre-dawn hours of the 23rd. The heavy rain was accompanied by gusts of 44 mph just before midnight on the 22nd at Logan (Camden) and a 41 mph gust there just after midnight. Moorestown (Burlington) saw a late gust of 40 mph on the 22nd. As the precipitation map in Figure 3 shows, two swaths of heavy rain crossed central and southern areas, while rain never reached the far south and barely touched eastern Sussex County. Five stations in Hillsborough (Somerset) picked up 2.95”, 2.18”, 1.89”, 1.66”, and 1.44”, and four Flemington (Hunterdon) stations saw an even wider spread of values with 2.80”, 1.72”, 1.37”, and 0.82”. Seven Franklin Township (Somerset) locations ranged from 2.28” to 0.90”, with Stockton (Hunterdon) collecting 2.34” and Mt. Ephraim (Camden) 2.10”. 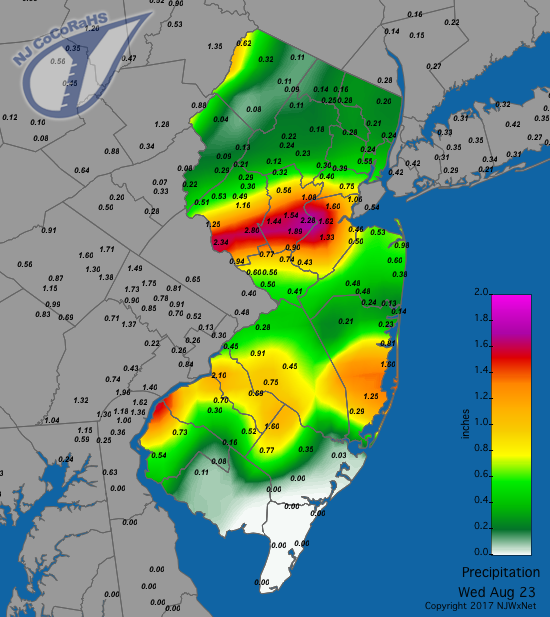 The last event of the month on the 29th–30th brought another cool, gloomy day to New Jersey. An offshore storm, which almost reached tropical storm status, brought heavy surf and dangerous rip currents to the coast and a 41 mph gust to Seaside Heights early on the 30th. Rain fell mostly in southern and central areas, with totals within a few tenths of an inch of 1.00” from Burlington and Monmouth counties southward and within a few tenths of 0.50” in central counties. Ocean Township (Monmouth) topped the list with 1.78” and 1.51”, followed by 1.57” in Howell (Monmouth) and 1.41” in Middle Township (Cape May).

The summer (June–August) proved to be one that was spot on average in the temperature department and somewhat wetter than normal. The average temperature of 72.5° was exactly the 1981–2010 average. Given that the 30-year average period was 1.0° warmer than the average for the period of record back to 1895, this past summer ranked as the 30th warmest over the past 123 years. While there were several hot spells, there were no prolonged heat waves lasting a week or longer. This may have seemed to be a cool summer, because 11 of the most recent 15 summers were all warmer.

Summer precipitation averaged 14.62" across the state. This was 1.94" above average and ranks as 41st wettest. As a result, there were no drought scares and for the most part lawns, gardens, and agricultural fields stayed green throughout the summer. Reservoir capacities remained at or above seasonal levels. The only exceptions were those in the west central region, which while remaining below average, crept up a bit toward normal levels. Thus on August 15, the NJ Department of Environmental Protection lifted the drought warning for Hunterdon and Somerset counties that had been in place since last fall. On occasion, rain interfered with weekend and holiday activities. This might have seemed more noticeable than usual since the past two summers had exceptional runs of excellent weekend weather.