An Early Winter Sampler: December 2017 Recap and Annual Summary, including the Top 10 Events of 2017

The last month of 2017 was similar to many a month this past year. Whatever the season, weather conditions varied quite a bit from week to week. This was mainly due to an absence of atmospheric blocking in the middle and high latitudes with patterns that can lock a particular weather situation in place for multiple weeks. Thus in December we had a mild week, a snowy week, and a very cold week interspersed with transitional conditions. The one largely absent factor was precipitation, which resulted in the 11th driest December across NJ since records were established in 1895 (Table 1). The 1.57” of rain and melted snowfall was 2.28” below the 1981–2010 average. Snowfall averaged 8.7”, which is 3.9” above average and ranks as the 25th snowiest December on record. It was the snowiest since 2010. North Jersey averaged 8.7” (+2.1”), central areas 7.8” (+2.3”), and the south 9.1” (+4.9”). Temperatures seesawed from week to week, with the monthly statewide average of 33.6° being 1.6° below the 1981–2010 average. This ranked as the 61st coldest or 63rd mildest December on record.

There were only six events during December where at least one location in the state received 0.25” or more of rain or melted snow. Only four of these topped 0.50”, while just one location on one day exceeded the 1.00” mark.

Late on the 5th a general statewide 0.25” of rain fell. South coastal counties had from 0.25”–0.50”, while Mercer and Middlesex received upwards of 0.75”. Robbinsville caught 0.94” and both South River (Middlesex) and East Brunswick saw 0.85”. From the pre-dawn of the 5th through the late evening, a snow event invaded the Garden State. Some rain mixed in far to the south but even there several inches of snow fell. Close to 3.0”–4.0” accumulated over the southern half of the state, with 4.0”–5.5” in the north (Figure 1). Snowfall exceeded 5.0” at one or more stations in 13 of the state’s 21 counties. Demonstrating the rather evenly-distributed nature of the storm, the top value of 5.5” was observed at nine locations over five counties, including Fort Lee and North Arlington in Bergen, four Middlesex County locations, Basking Ridge in Somerset, Wantage in Sussex, and Plainfield in Union. The rain and melted snowfall amounted to as much as 0.93” in Lower Township, 0.82” in Wildwood Crest (Cape May), 0.55”, 0.59”, and 0.62” at three Middle Township locations, and 0.61” at Jackson Township (Ocean). 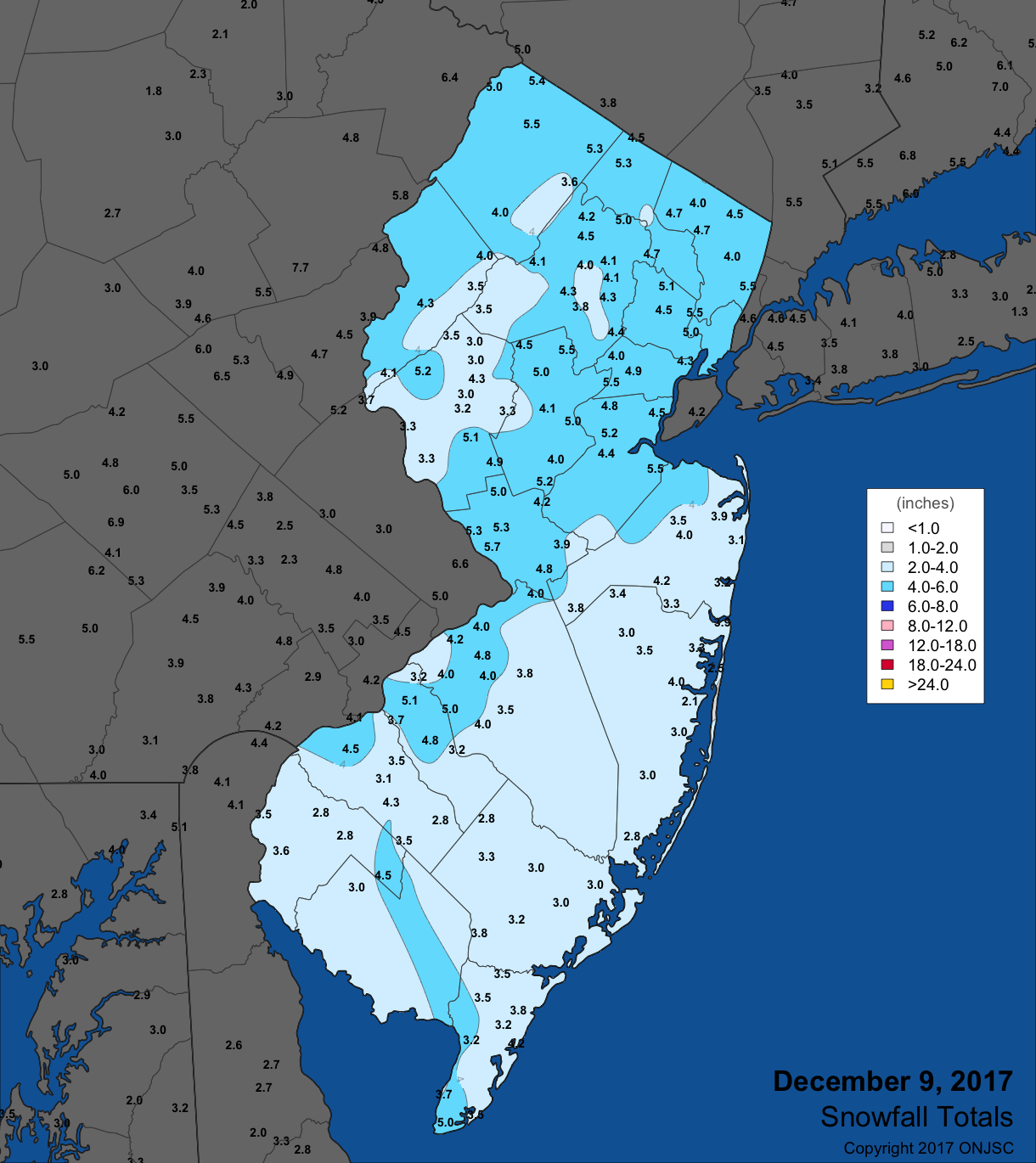 The third modest snow event in a week arrived during the afternoon of the 15th and lasted into the evening. A 2.0”–3.0” swath of snow extended from southwestern counties into Burlington, Ocean, and Monmouth counties. Totals gradually fell off to only a few tenths in the far south and northwest. Top totals in counties receiving at least two inches included Hammonton (Atlantic) 2.5”, Florence and Burlington (Burlington) 3.0”, Berlin (Camden) 3.6”, six stations in Gloucester County 2.5”, Hoboken (Hudson) 2.0”, Hightstown (Mercer) 2.8”, Cheesequake and Old Bridge Township (Middlesex) 2.5”, Howell Township (Monmouth) 3.3”, and Toms River (Ocean) 3.5”. The liquid equivalent of the snow was as much as 0.27” at both Galloway Township (Atlantic) and Evesham Township (Burlington), and 0.24” in Jackson Township.

The 23rd was a rainy day across NJ from pre-dawn through the evening. The northern half of the state saw mainly 0.50”–0.75”, most of the southern half 0.25”–0.50”, and less than a tenth falling in most of Atlantic, Cumberland, and Cape May counties. Peapack-Gladstone received 1.18”, Holland Township (Hunterdon) 0.86”, Mount Arlington (Morris) 0.85”, and Rockaway Township 0.84”. Rain began again during the evening of the 24th and lasted into the pre-dawn hours of Christmas Day. Before ending, the precipitation transitioned to a period of accumulating snow in the north, with some flakes flying further south. About 1.0”–2.0” accumulated north of Interstate 80, with lesser amounts covering the ground south to about Interstate 78. Those areas with an inch or more on the ground that morning had their first White Christmas since 2012. Top county totals for the five that received at least an inch included 1.5” in Ramsey (Bergen), 2.0” at Green Pond (Morris), 2.0” in West Milford (Passaic), 2.7” in Wantage (Sussex), and 1.5” at Blairstown (Warren). Rain and melted snow amounted to several tenths of an inch across most of the state, with the exception of Monmouth County where 0.75” and 0.68” fell at two Long Branch stations, 0.59” at Eatontown, and 0.49” in Belmar.

On the 30th, snow began falling in the southwest just before dawn. It spread statewide and continued at a light to moderate pace throughout the morning into the early afternoon. An inch or more was measured along the Interstate 195 corridor from Hamilton (Mercer) with 2.6” to Jackson Township 2.5” to Upper Freehold Township (Monmouth) 2.6” to Howell Township 2.8”. The snow water equivalent was quite low, with at best 0.17” in Brielle (Monmouth), 0.16” in Flemington (Hunterdon), 0.15” in Galloway Township, and 0.13” at Bethlehem Township.

The highest barometric pressure of the month occurred on the 28th with readings of 30.55”–30.65”. The lowest came on the 12th with observations between 29.40”–29.50”. Winds gusted to 40 mph or higher at one or more NJWxNet stations on nine December days. The 6th saw a 60 mph gust at High Point Monument (Sussex), with 44 mph and 41 mph gusts, respectively, at Wantage and Columbus (Burlington). The Monument topped out at 51 mph on the 12th, with Fortescue (Cumberland) at 47 mph and six stations between 40 mph–44 mph. The 13th was one of the two windiest days of the month across NJ, with High Point Monument up to 53 mph, both Sea Girt (Monmouth) and Fortescue at 49 mph, and 11 stations between 40 mph–47 mph. The Monument station reached 40 mph on the 14th.

Maximum temperatures equaled or exceeded 55° at the 63 NJWxNet stations on 11 December days. This included the first six days of the month, which started off with Cape May Courthouse (Cape May), Mansfield (Burlington), and Woodbine reaching 56° on the 1st, and 53 other locations between 50°–55°. Oswego Lake (Burlington) and Woodbine were 57° and 56°, respectively, on the 2nd. Woodbine reached 56° on the 3rd, with Cape May Courthouse and Oswego Lake at 55°. Oswego Lake got to 58° on the 4th, when Vineland (Cumberland), Hammonton, and Woodbine were 56°. The 5th was the warmest day of the month, with Oswego Lake again leading the way at 68°, followed by Cream Ridge (Monmouth), Hammonton, and Red Lion (Burlington) all at 67° and 42 stations between 60°–66°. High Point Monument was coolest at 50°. Oswego Lake reached 61° and seven stations 60° on the 6th.

On the cold side of the ledger, ten days during the month had a minimum temperature of 10° or lower at one or more NJWxNet locations. First came a four-day stint from the 13th–16th. This began with High Point Monument falling to 10° on the 13th. Walpack was 2° and Pequest (Warren) at 9° on the 14th, while Atlantic City Marina only fell to 29°. Walpack was 1°, Pequest 4°, Basking Ridge 5°, and Kingwood (Hunterdon) 6° on the 15th. Walpack and Pequest were 5° and Kingwood 6° on the 16th.


Annual overview, including the ONJSC’s Top 10 NJ Weather and Climate Events of 2017

The majority of this annual review focuses on our 9th annual top 10 list. Before getting to that, a brief recap of annual temperature and precipitation is in order. The statewide annual temperature of 54.7° was 1.8° above average (3.0° above the 1895–present average). This ranks as the 6th warmest year on record (Table 3). Notice that all of the top 10 years have been since 1990 and 15 of the top 21 warmest years over a 123-year period of record have occurred since 1998. Additional 2017 thermal rankings are found under #1 on the top 10 list below.

Now for the top 10 list. More about each event can be found in the monthly narratives posted on njclimate.org. You might be tempted to rearrange the rankings, particularly as some of the events down the list may have affected you more than others ranked higher. Or perhaps you best recall one that didn't make the list. That's the enjoyment and frustration of lists! Unless stated otherwise, statewide values are based on an average of several dozen stations. The period of record for monthly and annual departures is 1981–2010; while for extremes and rankings it is from 1895–present.