It will come as no surprise to those reading this report that February 2015 was one of the coldest months on record in the Garden State. The average temperature of 22.0° (11.8° below average) made this month the 3rd coldest February and 6th coldest (tied) of any month since statewide records commenced in 1895. Table 1 lists the ten coldest Februaries, based on observations gathered from several dozen stations throughout NJ. Colder Januaries include 1918 (19.9°), 1977 (20.2°), and 1912 (21.9°), with 1940 equal to this past February.


Statewide, melted snow, ice, freezing rain, and plain rain amounted to 2.34". This was 0.52" below average and ranks as the 32nd driest February. There were five events where snow fell to a depth of 2" or more at one or more locations, however there was no statewide "blockbuster" storm. NJ February snowfall averaged 12.3", which is 4.2" above normal. The northern third of the state averaged 16.3" (+6.2"), central area 12.6" (+3.6"), and southern third 10.1" (+3.5"). The ground remained snow covered throughout the month in northern and central regions, consistently at a depth exceeding 10" in the north and closer to 5" in central areas.

Along with the persistent cold there were some exceedingly cold mornings and some exceptional wind chill values. The thermometer dipped below zero on 18 days at Walpack (Sussex County), bottoming out at -20° on the 24th. Historical records show that only on February 28, 1934, was a colder temperature observed in NJ later in the season, that being -23° at Layton (Sussex). Most locations outside of urban centers or immediately adjacent to the coast saw the thermometer dip below zero on several mornings, most notably the 20th (especially in the south) and 24th (in the north). Along with the 18 subzero days at Walpack were two other days where this location did not reach that level but other stations did. Table 2 provides a sampling of coldest February monthly minimums around NJ.

Table 2. A sampling of February 2015 extreme daily minimum temperatures around NJ. Observations are from NJ Weather and Climate Network stations.


Wind chills on multiple occasions dipped below zero throughout the state, at times to between -10° and -20°. The most brutal wind chill conditions were observed at High Point Monument (Sussex), where below-zero temperatures and wind speeds exceeding 40 mph resulted in wind chills of -41° on the 20th (-14° temperature and sustained 35 mph wind) and -40° on the 15th and 16th. The wind chill bottomed out at -20° to -34° at High Point Monument on 11 other days.

A breakdown of all subzero days follows, including mention of any station reaching -10° or colder during the month. Pequest (Warren) started things off on the 1st at -1°. The 3rd found Walpack at -7 and Pequest next coldest at 1°, while on the 4th Walpack was -10° and Pequest again next at 1°. Such disparities were found at times this month, since the valley in which Walpack sits is a special location for cold air drainage on clear, calm nights with deep snow cover. Walpack was -6° on the 5th with High Point Monument next at 2°. The 6th saw Walpack down to -16°, with Pequest at -9° and Hackettstown (Warren) and Hope (Warren) both at -4°. Walpack was -6° and Pequest 1° on the 7th. Once the thermal inversion that helps make Walpack so cold during the nighttime hours disappears, temperatures can rise quite a bit during the day. In fact, on six February days the diurnal temperature range was 40° or greater. This includes the 28th when the morning low was -15° and daytime high 33°, a most impressive 48° range.

The 21st saw 31 of the 53 NJ Weather and Climate Network stations dip from -1° to -17°, with Walpack taking "low honors". Atlantic City Marina (Atlantic) and West Cape May (Cape May) were "mildest" at 13° and 11°, respectively. Berkeley Township (Ocean) in the southern Pinelands fell to -12° and Basking Ridge (Somerset) to -11°.

Just three February days saw high temperatures of 50° or higher somewhere in NJ and nine days had at least some stations peaking in the 40°s. Meanwhile, there were seven days when the entire state remained below the freezing point. The 1st saw Egg Harbor Township (Atlantic) get to 41° and four other stations to 40°. Greenwich (Cumberland), Hammonton (Atlantic), Upper Deerfield (Cumberland), and Woodstown (Salem) reached 51° on the 2nd, yet High Point Monument only rose to 23°. Greenwich, Howell (Monmouth), and Piney Hollow (Gloucester) reached 49° on the 4th, with 33 other NJWxNet stations between 40°–49° on a day that began at -10° in Walpack. Cape May Courthouse (Cape May) peaked at 46° on the 5th, with five stations at this value on the 7th. 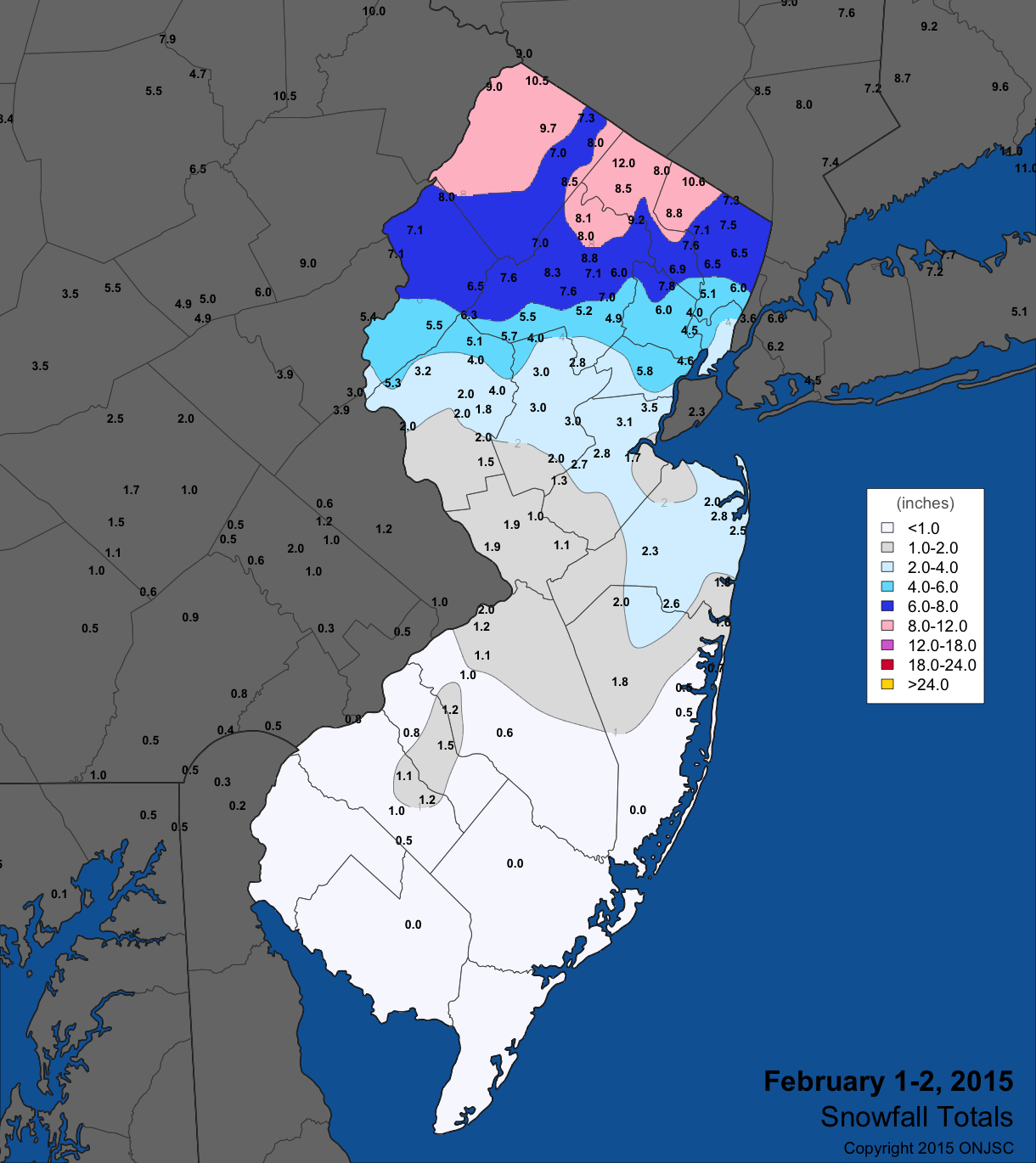 Conditions were quite quiet until the 14th when an afternoon event that lasted to the pre-dawn hours of the 15th brought snow throughout NJ. The Monmouth/Ocean county region saw the most with 3"–7" and Camden/Gloucester next at 3"–4". Elsewhere 1"–3" reports were common. Lavallette (Ocean) received 7.6", Red Bank (Monmouth) 7.0", Ocean Township (Ocean) 6.0", and Pitman (Gloucester) 5.0". Melted totals were as high as 0.48" in Lavallette, 0.42" in Freehold, and 0.41" at Clinton (Hunterdon). 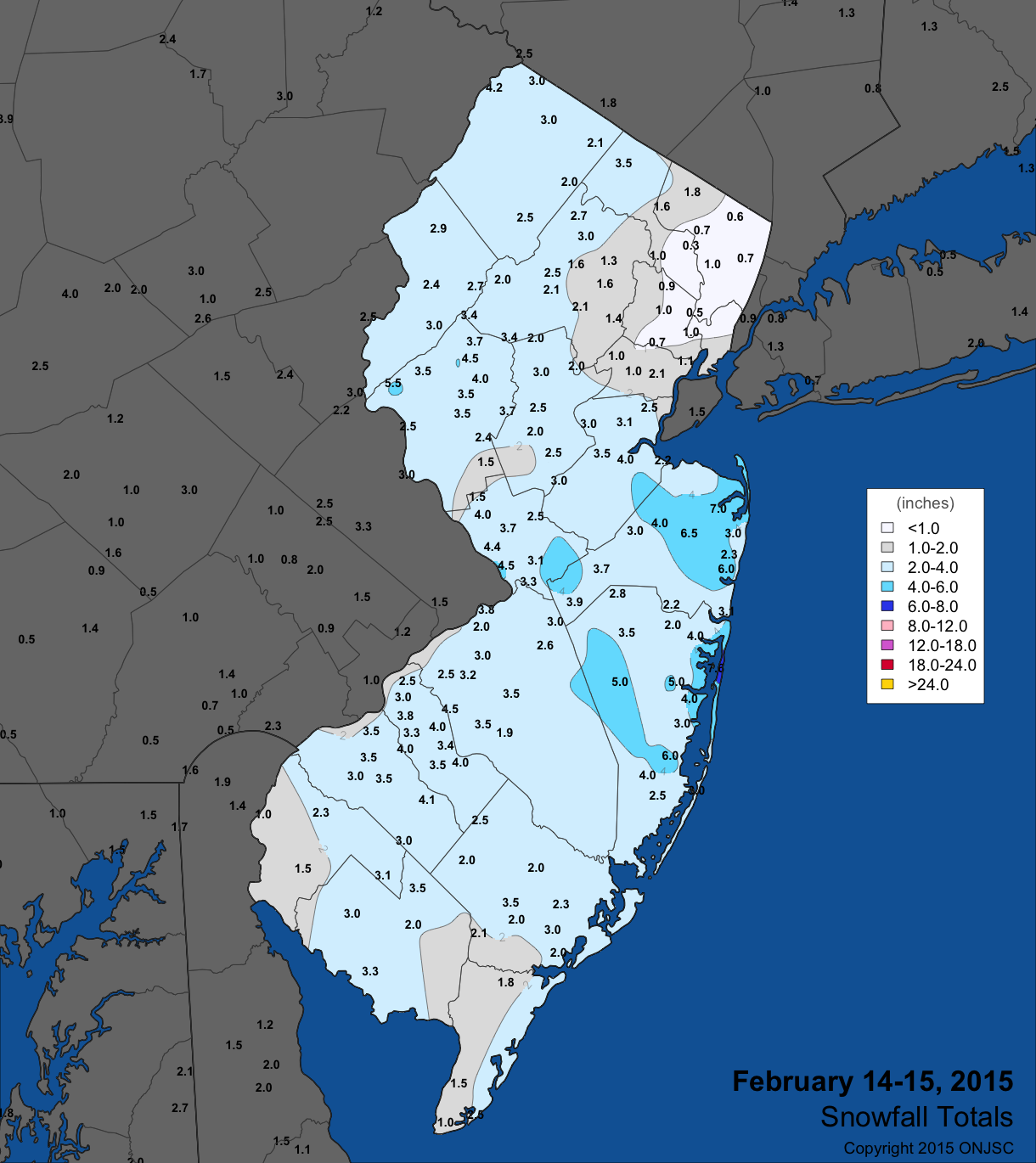 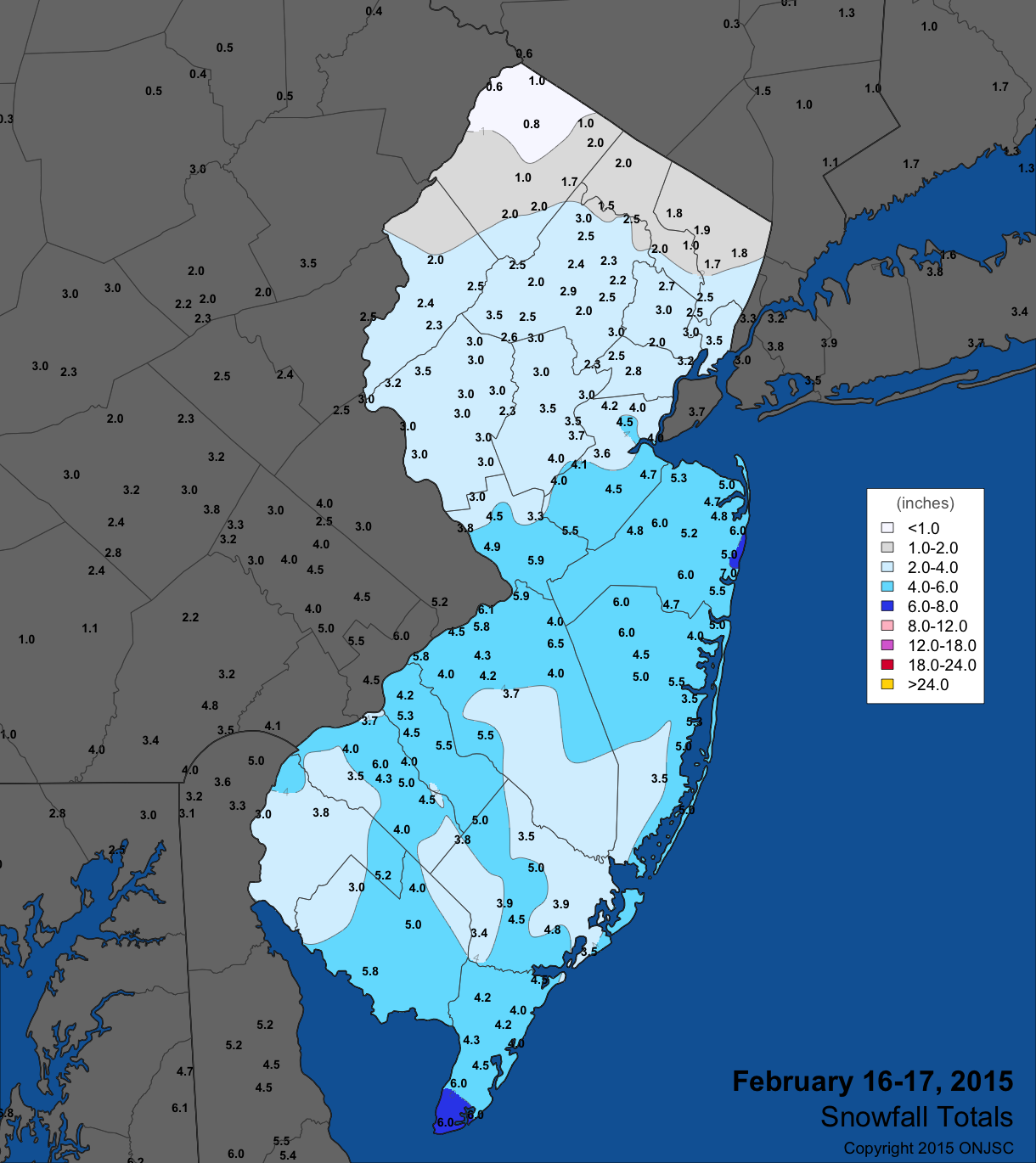 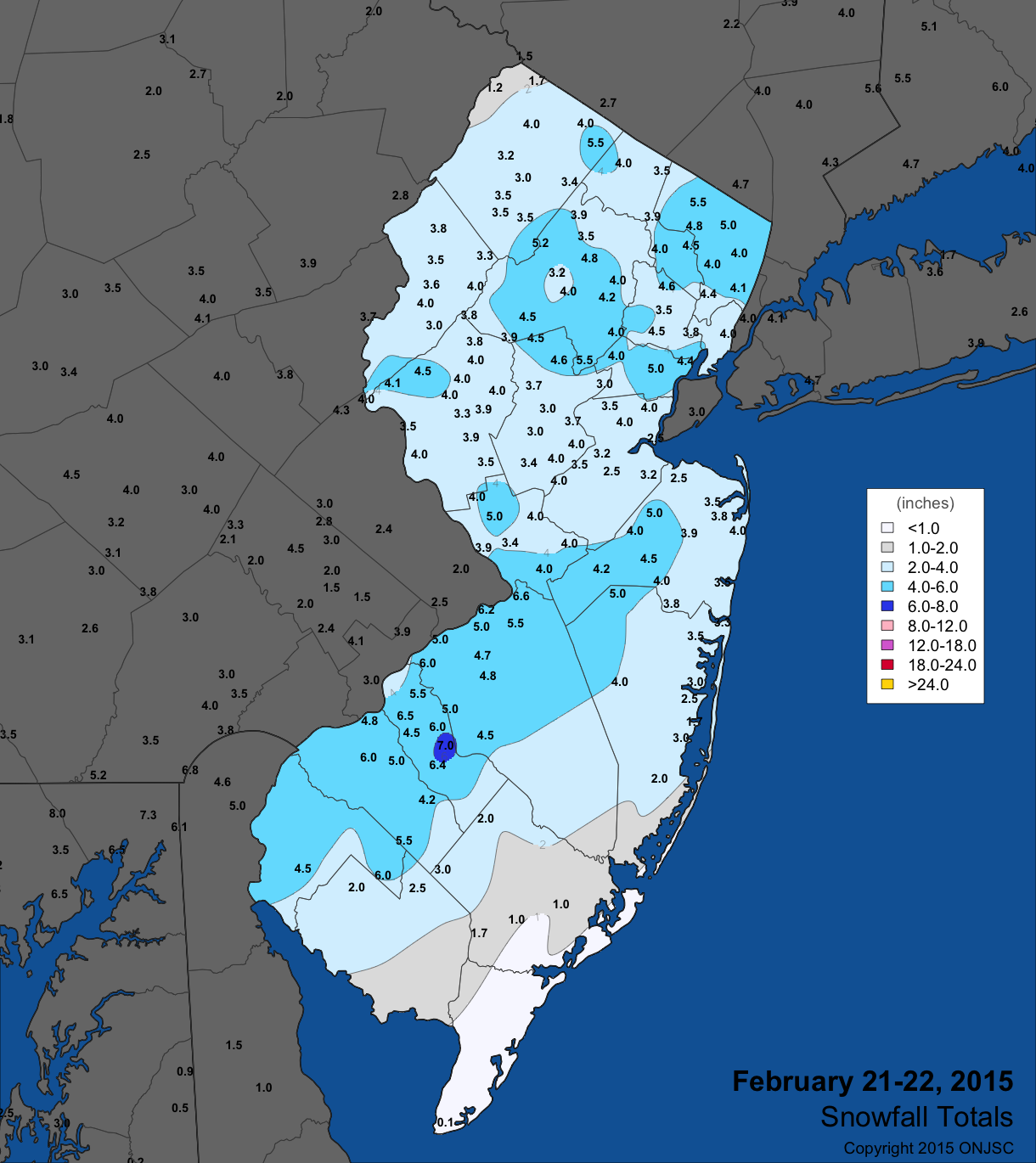 The first half of the 26th saw moderate snowfall in Cape May, eastern Cumberland, and eastern Atlantic counties. Elsewhere, totals were under an inch except a few inch plus totals in some far northern areas. In Cape May County, Wildwood Crest received 6.5", Sea Isle City 6.0", and Middle Township 5.8". Liquid totals were 0.20"–0.30" in the snowiest areas. 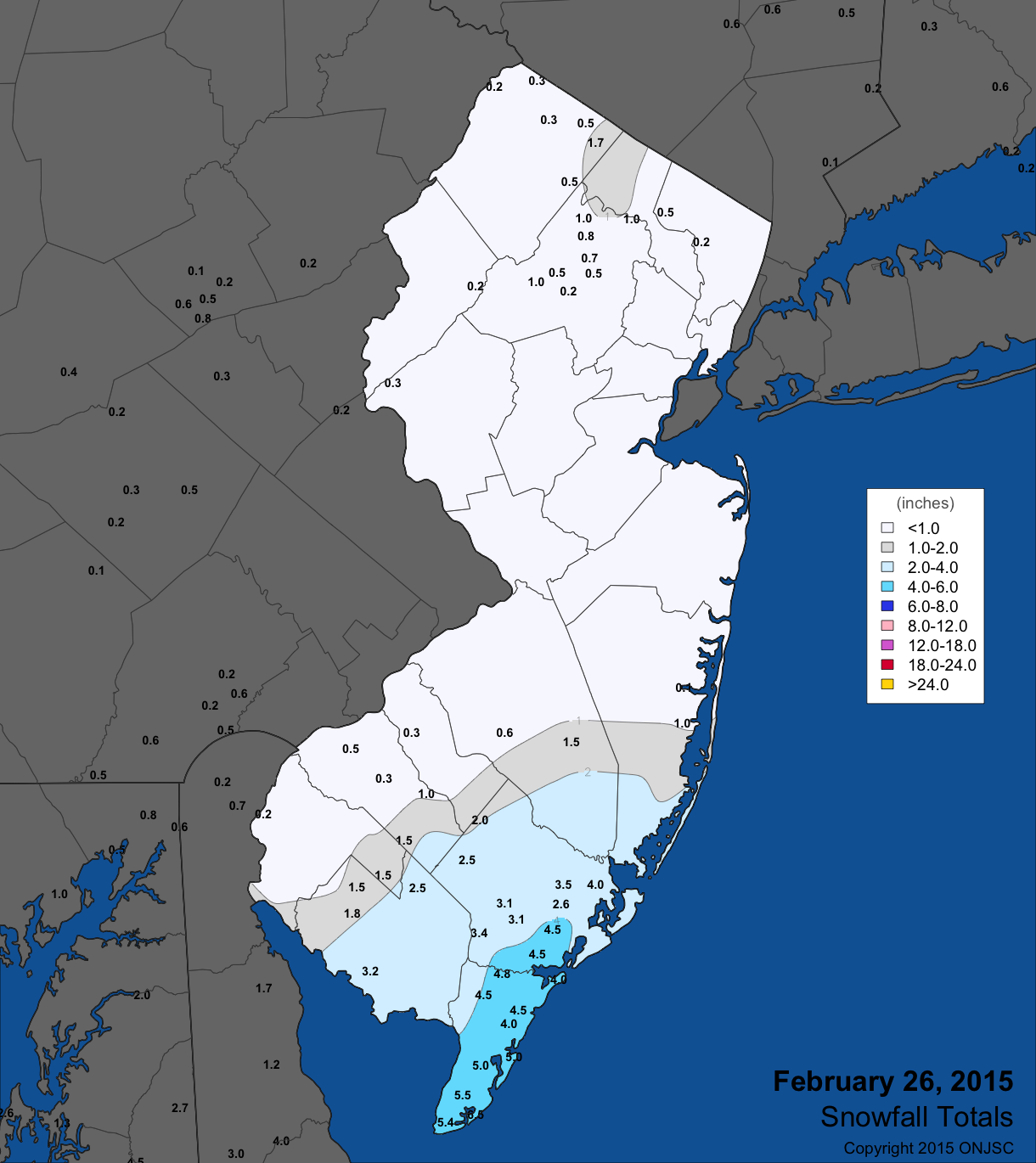 Rain and melted snow/ice amounted to 11.97" statewide during the three winter months. This was 1.71" above normal and the 30th wettest on record. December and January were an inch or more above average to outweigh February being a half-inch below the norm. Seasonal snowfall includes any snow falling from the late fall through early spring, thus will be summarized in April.