With the Northern Hemisphere atmosphere transitioning from winter to spring, March can be a month of frequently-changing weather with pronounced pressure gradients, thus punctuated by windy conditions. This past March was no exception, and in fact, a windier month would be difficult to find. Winds gusted to 50 mph or greater at one or more NJWxNet station on 11 days and between 40–49 mph on four other days. At most locations, the warmest daily average temperature of the month was, of all things, on March 1st, while the first 80° day of the year was on the 25th. In between those warm spells was the largest snowstorm of the year in central and northern locations and two weeks of some of the coldest weather of the winter. Finally, March went out like a lion, with a statewide soaking rainstorm on the 31st.

The statewide monthly average temperature of 38.9° was 1.9° below the 1981–2010 average. This ranks as the 61st coldest of the past 123 Marches. It was the first month with a below-average temperature since last May, which was only 0.3° below average and last April with a 0.1° negative anomaly. While not exceptionally cold, due to the record warm February average of 40.1°, this was only the third time on record when March was colder than the previous February. This occurred previously in 1984 and 1960. The 1960 occurrence was mainly due to March being the second coldest on record, while in 1984, February was 9th mildest and March 10th coolest. On average, March is 7.3° warmer than February. While the cold of March damaged blossoms of some prematurely-blooming trees and flowers, vegetation was not far enough along to result in significant problems.

Monthly precipitation (rain and melted snowfall) for the state averaged 4.10”. This is only 0.01” below average and ranks as the 54th wettest. These values are generated from long-term National Weather Service Cooperative Observing Stations, where most of the several dozen stations used to generate the average close the books on the month at their normal early morning observing time on the 31st. Thus, the majority of the rain that fell on the 31st is reported as an April 1st observation. Still, this late-month event will be discussed in the report below, however, we will have to wait until April is finished to see how the rain that fell following the morning observations on the 31st factors into that month’s average.

Much like at most of the aforementioned NWS Coop stations, NJ CoCoRaHS observers take their daily precipitation readings in the morning. Therefore, the March 1st–31st precipitation totals “missed” the daytime and evening precipitation on the 31st. Thus the wettest CoCoRaHS station in NJ in March was Stafford Township (Ocean County) with 6.22”, followed by Berkeley Township (Ocean) with 5.73”, Lacey Township (Ocean) 5.38”, Holland Township (Hunterdon) 5.36”, and Eatontown (Monmouth) 5.31”. As a point of interest, the March 1st to April 1st leaders were Eatontown with 8.79”, Long Branch (Monmouth) at 7.89”, and Berkeley Township with 7.64”. The driest stations in March were in southwest and far southern reaches, with 2.76” in Pittsgrove (Salem) the most meager total. The next four lowest include Woodstown (Salem) 2.78”, Pitman (Gloucester) 3.02”, Middle Township (Cape May) 3.26”, and Franklin Township (Gloucester) 3.27”. The lowest March 1st to April 1st totals were 3.67” at Pittsgrove, Woodstown 3.82”, and 3.98” in Pitman.

The first precipitation event of March began as pre-dawn showers, which was followed by a mid-day squall line that resulted in some tree damage in portions of Cape May County. The northern third and southeast corner of the state mainly received 0.25”–0.50”, with less falling elsewhere. Lebanon (Hunterdon) saw the most with 0.63”, followed by Lacey Township at 0.61” and Ocean City (Cape May) with 0.58”.

The first of two mid-month snowstorms impacted most of NJ beginning during the pre-dawn hours of the 10th and tapering off in the afternoon. Seven counties saw one or more locations receive 4.0” or more, with both High Point Ranger Station and Whitehall (Sussex) topping the list at 5.7”. Statewide, the water equivalent of the snowfall was from 0.25”–0.50”, except lower amounts occurred in Cape May County.


Table 1. Greatest snowfall on March 10th in the seven NJ counties where totals equaled or exceeded 4.0”.

The largest snowstorm of the season impacted northern and central areas from late on the 13th into the evening of the 14th. Mostly snow fell north of Interstate 78, with just some sleet mixing in at times. Central sections saw 3.0”–5.0” of initial snow transition to as much as 2.0” of sleet in some locations. Further south, an additional change to freezing rain occurred, with up to several tenths of an inch of ice accumulating on some surfaces. Meanwhile, little or no freezing precipitation fell, though rainfall was quite heavy. Strong winds pummeled the state and minor to borderline moderate coastal flooding occurred at times of high tide.

The deepest snow accumulated in the higher northern elevations, with as much as 20.3” in Vernon (Sussex) and 19.8” in Wantage. Totals decreased to about 6.0” in the piedmont, 3.0”–6.0” in the inner coastal plain, and from less than 3.0” down to nothing in the outer coastal plain (Figure 1). The top totals within the 14 counties where 5.0” or more was observed at one or more locations are listed in Table 2. 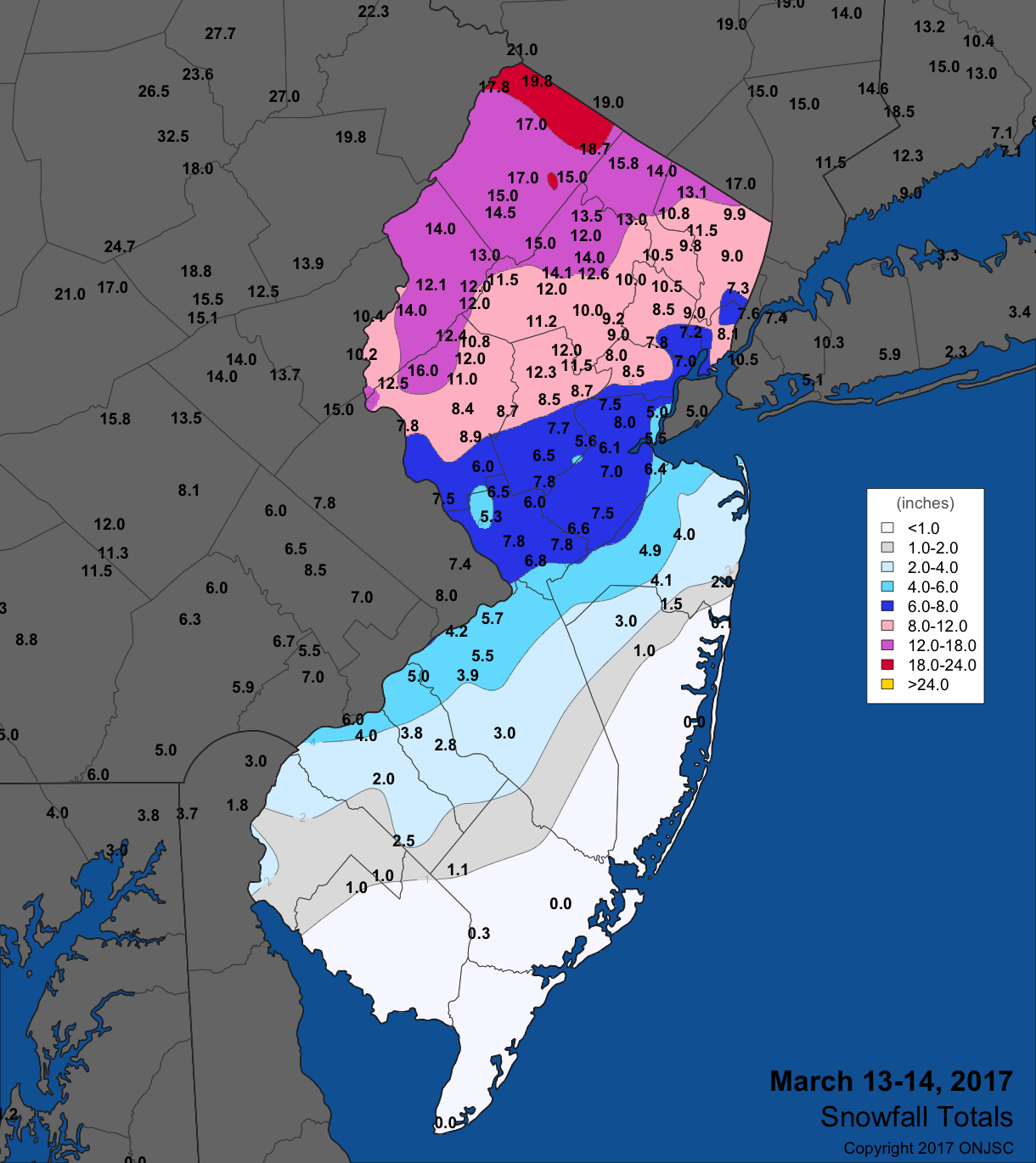 Table 2. Greatest snowfall in the seven NJ counties where totals on March 13th–14th equaled or exceeded 5.0”.

Snow squalls followed on the 15th, with as much as 2.0” accumulating in Cinnaminson (Burlington) and Bethlehem Township. Gusty winds continued, reaching 60 mph at High Point Monument and between 40–49 mph at eight other NJWxNet stations.

The highest barometric pressure observed in March was on the 4th and 23rd, with readings of 30.60”–30.65”. The storm on the 14th brought the lowest pressure, with the barometer bottoming out at 29.05”–29.10” along the coast and close to 29.30” in the northwest. Winds from the storm on the 14th and also on the 15th were previously mentioned, but there were 13 other days with gusts equaling or exceeding 40 mph. The squall on the 1st brought gusts of 54 mph to Woodbine (Cape May), 48 mph to Berkeley Township, West Cape May (Cape May) 43 mph, Dennis Township (Cape May) 42 mph, and 41 mph at both Lyndhurst (Bergen) and Pennsauken (Camden). The 2nd was exceptionally windy, with gusts to 58 mph at Seaside Heights, 57 mph at High Point Monument, Harvey Cedars 55 mph, Sea Girt 53 mph, Pennsauken 51 mph, Columbus (Burlington) 50 mph, and 28 other NJWxNet stations between 40–49 mph. The third had a gust to 52 mph at the Monument, 42 mph at Fortescue, 41 mph in Pennsauken, and 40 mph at Seaside Heights. The Monument reached 52 mph and Seaside Heights 42 mph on the 4th.

Eleven March days saw the temperature top out at 60° or higher at one or more of the 65 NJWxNet stations where temperature is measured. A high of 75° was reached on the 1st at five stations, with 35 others between 70°–74°. High Point Monument was the coolest location at 58°. The NWS Atlantic City Airport (in Pomona, Atlantic County) station had a record 73° (observations extend back to 1958). Five stations got to 65° on the 2nd, with a whopping 49 locations between 60°–64°. Piney Hollow (Gloucester) reached 69° on the 7th, with seven stations at 68°. Sicklerville (Camden) and West Deptford (Gloucester) were 64° on the 8th, with nine stations at 63°. Egg Harbor Township (Atlantic), Sicklerville, West Creek, and Woodbine were 69° on the 9th.

Warmth did not return until the 21st, when Wayne (Passaic) reached 63°, Hawthorne (Passaic) 62°, and 15 stations between 60°–61°. Eleven locations touched 61° on the 24th and ten got to 60°. On the 25th the 80°s arrived in NJ for the first time in 2017, when Egg Harbor Township and Sicklerville soared to 81° and Hammonton (Atlantic) and West Creek hit 80°. The Atlantic City Airport station achieved a record high of 81°. Seventeen NJWxNet locations were between 75°–79° and seven from 70°–74°. Meanwhile, with some snow cover remaining to help keep things cool, Wantage only made it to 48°. During the afternoon of the 25th, statewide temperatures ranged from 41° at High Point Monument to 81° at several previously-mentioned locations (Figure 2). 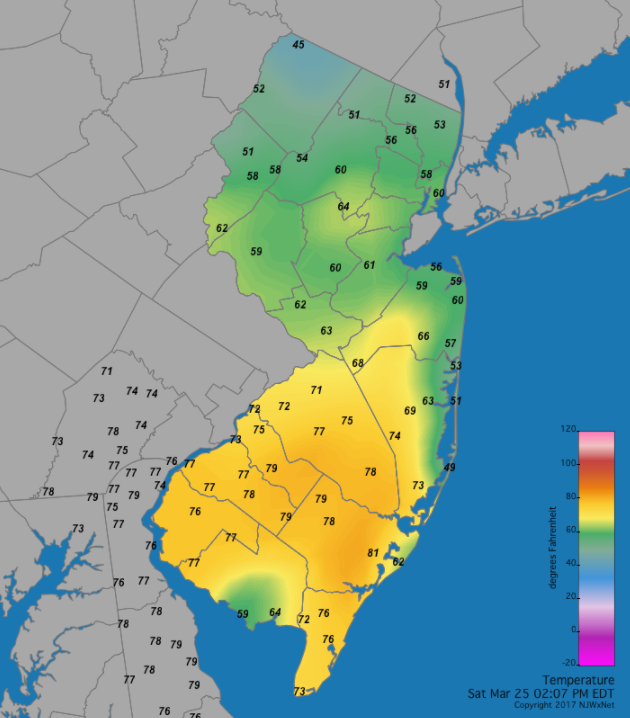 Figure 2. Temperatures across NJ at 2:07 PM on March 25, 2017. Note that the 41° temperature observed at High Point Monument at this time is not displayed. Rather the 45° at nearby High Point Mesonet reading is shown.

Not forgetting that this March was below average in the temperature department, it was not surprising to find that on 17 days the temperature somewhere in NJ fell below 20°. These lows came within a 22-day interval between the 3rd and 24th. High Point Monument reigned supreme, with 14 daily minimums below 20°. This location fell to 12° on the 3rd, when the High Point Mesonet station (Sussex; 367 feet lower than the Monument station) fell to 14° and Wantage 16°. The Monument was 5°, High Point Mesonet 6°, and Wantage 8° on the 4th, with 42 NJWxNet locations coming in between 10°–19°. The coldest day of the month was the 5th, when High Point Monument fell to 2°, High Point Mesonet 3°, nine other locations from 5°–9°, and 37 stations between 10°–14°. West Cape May was “mildest” at 17°. Berkeley Township was down to 8° on the 6th, with Walpack (Sussex) at 9°.

The 20th found Walpack down to 15° and Pequest 19°. High Point Monument was 13°, High Point Mesonet 14°, and Wantage 16° on the 22nd. Perhaps the last single-digit minimum of the season was achieved on the 23rd, when Walpack plummeted to 5°. Both Berkeley and High Point Monument also reached 11° on the 23rd, with the five mildest stations 24°. The last teens of the month were on the 24th, with lows of 16° at Walpack and 19° at both Hopewell Township (Mercer) and Pequest.