While the first and last few days of the month came in disguised as a lamb, March 2018 was a roaring lion on many occasions. Three nor’easters pounded New Jersey, with a fourth grazing the state, turning more of its wrath on southeastern New England. In true nor’easter fashion, the storms brought minor to moderate coastal flooding, significant beach erosion, powerful winds, heavy rain, and record- to near-record-breaking snowfall. This led to two of the larger power outages since Sandy in 2012, numerous traffic accidents, significant tree damage, frequent school closings, and even someone being injured by lightning during a snowstorm.


Table 1. The eleven snowiest Marches across NJ since 1895.

While March temperatures were not exceptionally cold, with the exceptions of the aforementioned early- and late-month days, they were persistently on the cool side of normal. The 38.0° average was 2.8° below the 1981–2010 mean (1.4° below the 1895–present mean). This tied for the 46th coolest and was the coldest since 2015. For the second consecutive year and only the 4th time on record, the March statewide average temperature was colder than the previous February’s average. This rare occurrence this year and last was primarily the product of the two mildest Februarys on record more so than cool March conditions. The prior two occurrences in 1960 and 1984 were mainly due to, respectively, the 2nd and 11th coldest Marches on record.

In addition to the record 44.3” March record snowfall in Jefferson Township, two stations in Rockaway Township (Morris) caught 43.9” and 36.7”, two Mine Hill Township (Morris) sites had 42.8” and 40.9” accumulate, two Randolph Township (Morris) observers measured 42.1” and 37.9”, Oakland (Bergen) received 38.0”, West Milford (Passaic) 37.7”, and Hardyston (Sussex) 37.3”. The multiple-inch differences within several of these communities are quite reasonable given the frequent elevation dependence of the accumulating snow and the band-like patterns of the falling snow. The far south received the least snow during the month, with Wildwood Crest (Cape May) only catching 0.8”, Sea Isle City (Cape May) 3.5”, Middle Township (Cape May) 4.0”, Galloway (Atlantic) 5.0”, and Salem (Salem) 7.4”.

Without question, the 2nd was one of the windiest days since Sandy. Gusts topped 50 mph at 12 NJWxNet stations and reached 40–49 mph at 20 other stations. Harvey Cedars (Ocean) led the way with a 62 mph gust, followed by Fortescue (Cumberland) 60 mph, Atlantic City Marina (Atlantic) and Seaside Heights (Ocean) each at 58 mph, West Cape May (Cape May) 57 mph, Pennsauken (Camden) and High Point Monument (Sussex) each at 56 mph, Mullica (Atlantic) 54 mph, Sea Girt (Monmouth) 53 mph, Logan Township (Gloucester) 52 mph, and Woodbine (Cape May) and Columbus (Burlington) each at 51 mph. The wind abated some on the 3rd, but gusts to 45 mph were recorded at Harvey Cedars, Seaside Heights, and Fortescue, with seven other locations gusting from 40–43 mph.

In addition to minor to moderate coastal flooding and beach erosion, the wind felled trees and power lines, leading to as many as 175,000 customers losing power for short or multi-day periods. In fact, some failed to have power return prior to the next debilitating storm.

This next storm was a 24-hour event, beginning during the late evening of the 6th. As with the previous storm, it began as rain before mixing with snow by dawn in northern and central regions. The pace of the precipitation picked up during the afternoon and evening, with 2” or greater per hour snowfall rates at times in a number of locations. Sleet also mixed in at times in some areas and the early afternoon saw rather widespread reports of lightning and thunder across central and southern areas, resulting in the aforementioned individual being struck and injured. Rain and melted snow totaled as much as 2.84” in Madison (Morris), four Franklin Township (Somerset) locations reported between 2.40”–2.65”, Moorestown (Burlington) 2.56”, and Galloway 2.51”. Some 48 CoCoRaHS stations saw 2.00”–2.84” and 112 from 1.00”–1.99”.

Eleven counties had one or more stations buried under 10.0” or more snow (Table 2), with seven other counties with reports from 5.0” –9.9” (Figure 1). Montville (Morris) was the “winner” with 26.8” of the white stuff, followed by 26.0” in Oakland. The deepest snow fell at higher elevations within the Highlands, with 10.0” snows extending south into northern Burlington County. There was a rather sharp cutoff in snowfall into the eastern part of NJ, with coastal areas receiving less than 2.0”.

Considerable tree damage, the worst since Sandy, though not of that magnitude in most areas, occurred where about 5.0” or more of the heavy, wet snow fell. This contributed to close to 337,000 customers losing power, a number that approaches 10% of NJ customers. Winds gusted over 40 mph along the coast, contributing to minor to moderate flooding and beach erosion but not greatly to power outages. The 7th brought gusts of 47 mph to Sea Girt and Seaside Heights and 46 mph to Atlantic City Marina.


Table 2. Largest snowfall in the eleven NJ counties where totals on March 6–7 equaled or exceeded 10.0”. 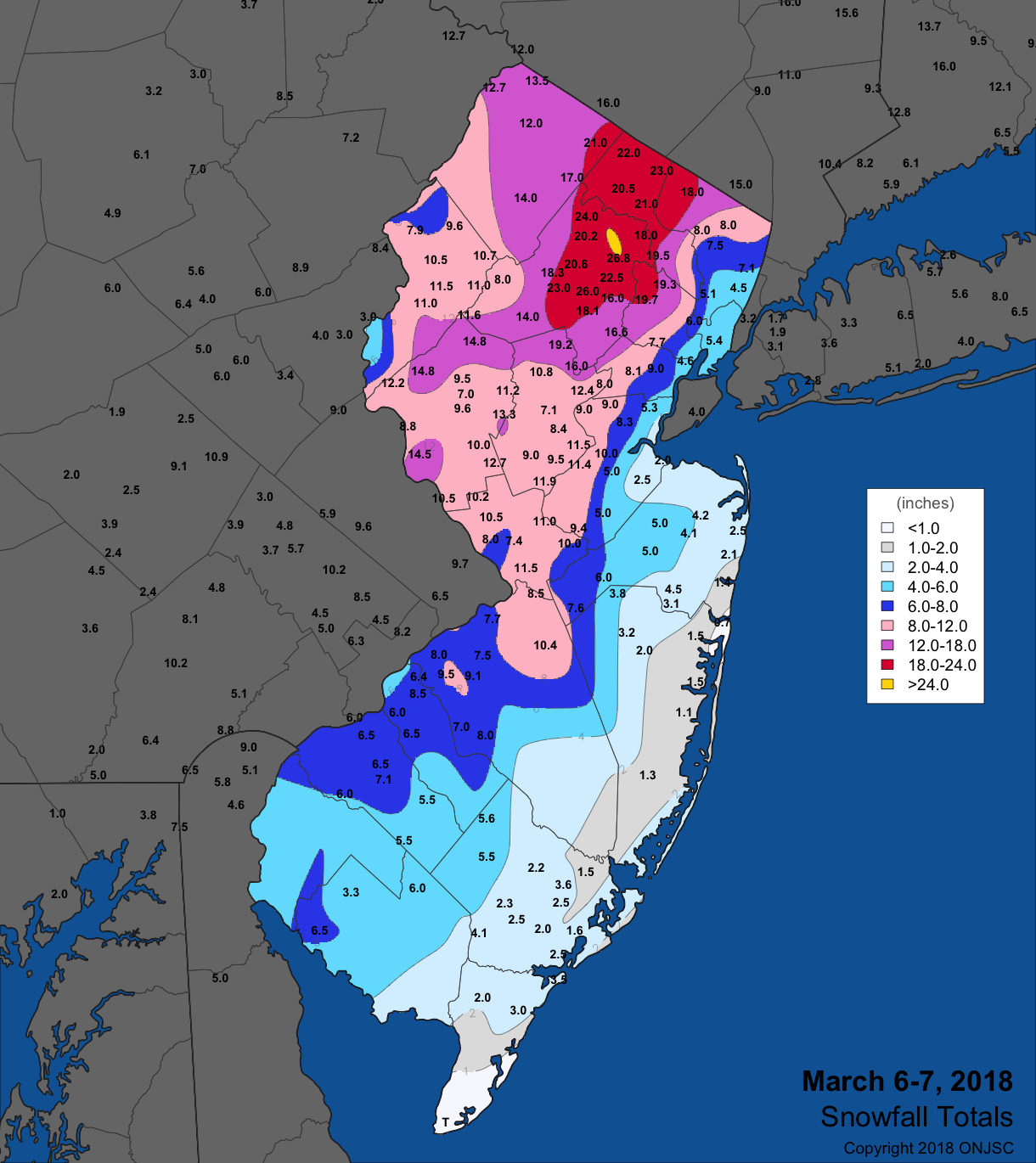 The third nor’easter of the month was by far the weakest of the four to impact NJ. It arrived during the late afternoon of the 12th and lasted into the middle of the 13th. It was mainly a light rain and snow event that brought as much as 0.57” to Lacey Township, Stafford Township (Ocean) 0.54”, Franklin (Sussex) 0.53”, and Long Branch (Monmouth) 0.52”. Portions of the Highlands received more than 4.0” of snow, including Highland Lakes with 7.5” and Green Pond 5.4”. The remainder of central and northern NJ received mainly 1.0”–3.0”, except for an area in and around Monmouth Country that caught 2.0”–4.0”, with Freehold (Monmouth), at 4.7”, highest in this region. There was some minor coastal flooding and beach erosion, with winds gusting over 40 mph from the 12th to the 14th. Seaside Heights peaked at 45 mph on the 12th, along with Atlantic City Marina 41 mph and Harvey Cedars 40 mph. Fortescue reached 40 mph on the 13th and Atlantic City Mariana topped at 46 mph, Fortescue 45 mph, and six stations from 40–44 mph on the 14th.

The final March nor’easter arrived on the morning of the 20th with a mix of rain, sleet, and snow falling mainly in the southern half of the state as spring began shortly after noon. Moderate precipitation fell through the afternoon in the south with some sleet making it into central areas. The next round of this event included snow overnight through the morning of the 21st, mainly in western portions of the state. There was also a light accumulation of freezing rain in the southwest. Round three saw heavier snowfall in the afternoon and especially in the evening over toward the coast, tapering off early on the 22nd. This all led to some hefty precipitation totals (rain and melted snow/sleet) that reached 2.99” in Lacey Township, Belmar 2.61”, Manchester Township 2.31”, Medford (Burlington) 2.20”, Pennsville (Salem) 2.10”, Stafford Township 2.03”, Ocean Township (Monmouth) 2.02”, and 79 CoCoRaHS stations between 1.00”–1.99”.

Areas from Camden and Burlington counties northward mainly received 8”–12” of snow, except less than 4” fell in the far northwest (Figure 2). Ten counties had one of more location equal or exceed 10.0” (Table 3), led by Lacey Township with 15.0” and Stockton with 14.1”. 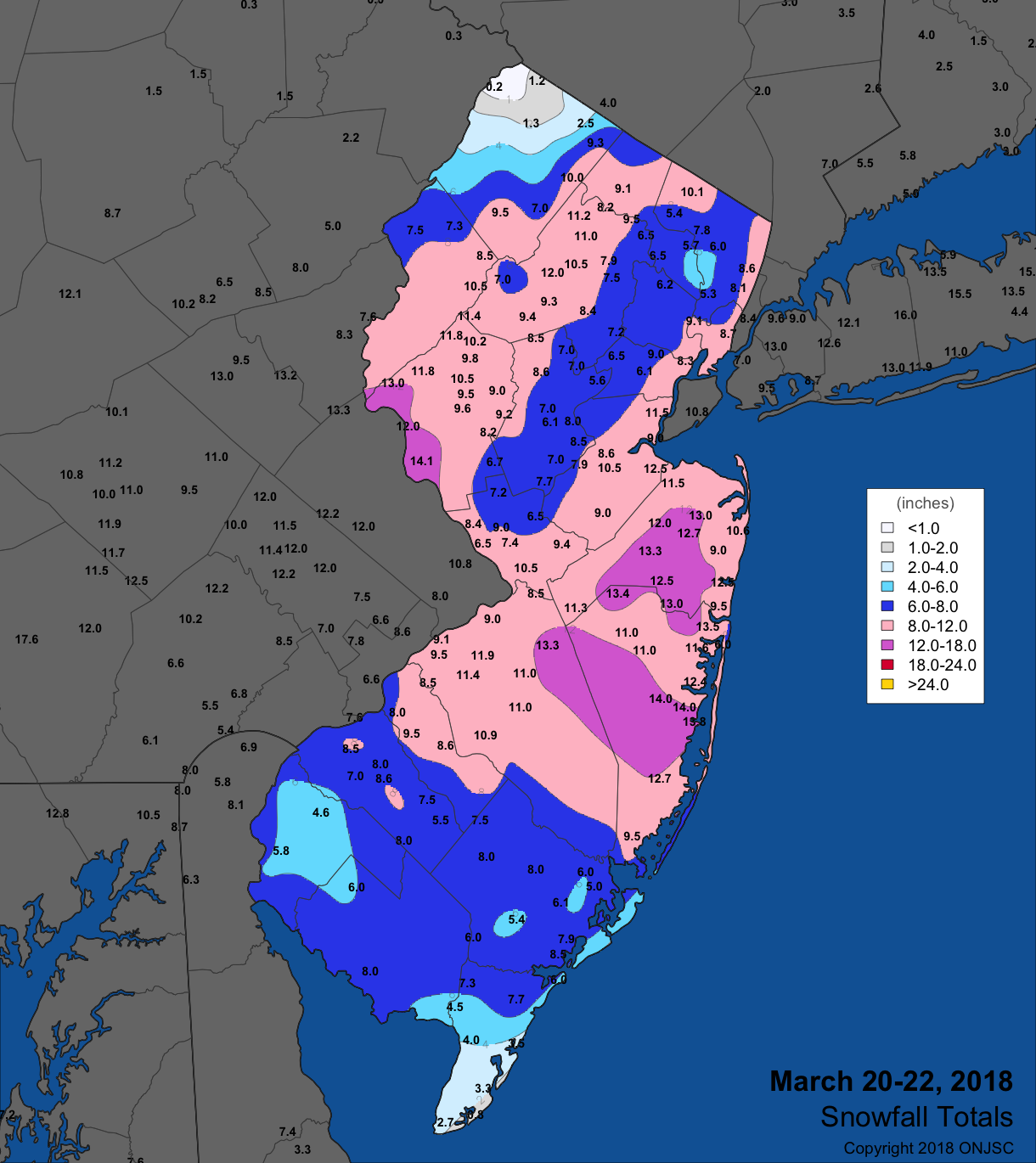 Table 3. Largest snowfall in the ten NJ counties where totals on March 20–22 equaled or exceeded 10.0”.


Winds howled in this storm, with minor to moderate coastal flooding and beach erosion again plaguing the state. Gusts reached 47 mph at Atlantic City Marina on the 20th, with Fortescue to 42 mph, West Cape May 41 mph, and Harvey Cedars 40 mph. The 21st brought gusts to 48 mph in Harvey Cedars, Seaside Heights 46 mph, Atlantic City Marina 44 mph, and Sea Girt 42 mph. It was the cumulative effect of all of this month’s storms that sorely impacted Jersey beaches.

To demonstrate the consistency of the cool temperatures during much of the month, the New Brunswick (Middlesex) National Weather Service Cooperative Observing Station went 20 consecutive days with a maximum temperature of 50° or lower (3rd–22nd). This is the second longest such March streak at this location since 1896, the longest being the first 24 days of the month in 1916 (the end of a 52-day run and also during the 6th snowiest NJ March).