The tenth month of 2017 was marked by the slow arrival of October-like temperatures, including the first freezes of the season, by the close to two week delay in the fall leaf season, and by the absence of much precipitation until two late-month storms made up for lost time. Amidst all of this, October proved to be the second warmest across New Jersey since the onset of records in 1895 (Table 1). The 60.7° average was 6.2° above the 1981–2010 normal, trailing the 2007 record by 1.4°, but 0.9° above the now third mildest October in 1971. The month ended with a large portion of the state yet to be visited by the first freeze of the season.

Rainfall was rather limited throughout the first three weeks of the month, leading to an expansion of D0 “abnormally dry” conditions across the northern half of the state in the US Drought Monitor. It was anticipated that a portion of the north would move to a D1 “moderate drought” designation and the remainder of NJ to D0 come the October 31st weekly map (as mentioned in previous reports, the state climate office plays a significant role in making such designations). However, some welcome rain fell on the 24th, and on the 29th the largest statewide rain event since April 30, 2014, brought close to, and in some areas more than, a month’s worth of liquid in a major storm. This arrived on the 5th anniversary of Sandy and 6th anniversary of a historic early season snowstorm. When all was said and done, statewide October precipitation averaged 4.96”. This is 1.07” above average and ranks as the 25th wettest of the past 123 years.

There were a rather remarkable eight October afternoons where the temperature topped out at 80° or higher in one or more locations. This included seven consecutive days from the 4th–10th. Haworth (Bergen County) began this run with 81° on the 4th. The 5th saw the month’s warmest temperature of 86° right behind the dunes at Sea Girt (Monmouth), with five stations at 85° and 50 other stations out of the 66 NJWxNet stations between 80°–84°. High Point Monument (Sussex) was coolest at 73°. The 6th found Cape May Courthouse (Cape May) and Pennsauken (Camden) up to 85°, 45 stations between 80°–84°, and Harvey Cedars (Ocean) coolest at 73°. The heat continued on the 7th, with eight stations in five counties at 85°, 43 stations from 80°–84°, and Harvey Cedars again up to 73°. Cape May Courthouse reached 85°, with Upper Deerfield (Cumberland) and Vineland (Cumberland) up to 84° on the 8th. Greenwich (Cumberland) hit 82° and five stations 81° on the 9th. The string finished with Greenwich, Red Lion (Burlington), Sewell (Gloucester), South Harrison (Gloucester), and Vineland achieving 85° on the 10th, with 46 others between 80°–84°. Later in the month, the 25th saw Haworth reach 81°, four stations get to 80°, and 51 locations between 75°–79°, while Bivalve (Cumberland) only reached 62°.

Despite the near-record warmth of October, there were ten days when the minimum temperature dipped to 32° or cooler. However, on five of these days, just one of the NJWxNet sites fell below freezing. Basking Ridge (Somerset) had the honor of being the first location with a freezing low this season, falling to 32° on the 4th. The last spring freeze at this location in the Great Swamp was on May 4th, thus there were 150 freeze-free days constituting the growing season. The 3rd brought a 32° low to Walpack (Sussex), and given the last spring freeze occurring on May 11th, this made for a 144-day growing season.

Warmth prevailed for almost the next two weeks. This included the 8th and 9th with overnight warmth rivaling some uncomfortable mid-summer nights. This included 50 stations with lows between 70°–73° on the first night and 51 stations within that range on the second. High Point Monument was coolest each of these nights at 65° and 63°, respectively.

There were several periods with little to no rain across the state. The first of these was from the 1st–7th, which was only interrupted on the evening of the 5th by showers amounting to less than 0.20”. The first substantial rain of the month arrived on the morning of the 8th in central and northern areas, continued in the northwest during the overnight hours, and ended with scattered showers during the afternoon and early evening of the 9th. These periods of rain were associated with the remnants of Hurricane Nate, which remained well offshore. All told, Montague (Sussex) received the most at 1.51”, followed by 1.48” and 1.46” at two Blairstown (Warren) sites, 1.26” in Rockaway, and 1.25” at Wantage (Sussex). Most of the northwest received more than 0.75”, while 0.25” to 0.75” fell elsewhere, with the exception of lower totals in the far south.

Scattered showers in the south during the morning of the 11th transitioned to afternoon and evening showers in central and northern reaches and then statewide rain that ended early on the 12th. The entire event saw Holland Township (Hunterdon) top the list at 0.67”, followed by Hopewell Township’s 0.66”, and 0.62” in both Folsom (Atlantic) and Ewing (Mercer) townships. Most east central and northeast locations received less than 0.20”.

Morning rain, mostly in the south, measured between 0.25” to 0.33” on the 16th. This was followed by a weeklong rain-free period with mainly clear skies from the 17th–23rd. Showers returned on the 24th, streaming up the state in narrow north-northeastward bands (Figure 1). West Milford (Passaic) received 1.47”, Mount Arlington 1.26”, Oakland (Bergen) 1.25”, and two stations in Boonton (Morris) each saw 1.22”. Strong winds accompanied the rain, particularly in the south early in the day. A gust of 49 mph was observed in Fortescue (Cumberland), 48 mph in Upper Deerfield, and 47 mph at Logan Township (Gloucester). Eight other stations had gusts between 40 mph–44 mph, and 30 mph–39 mph gusts occurred at 30 other stations. Trees and power lines were reported down from these winds. 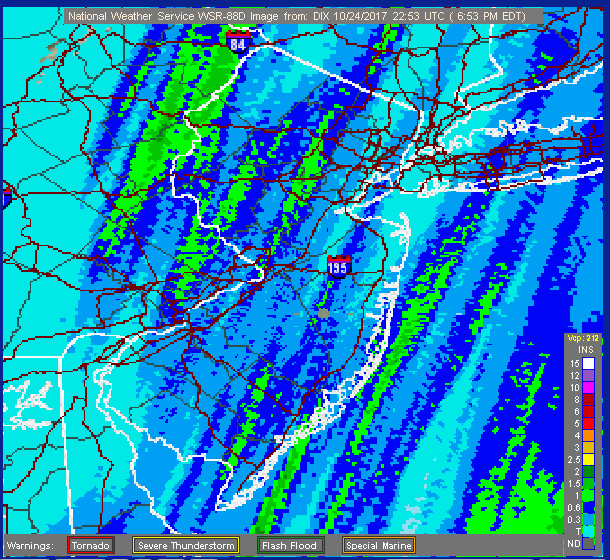 Figure 1. Radar-derived estimated rainfall totals for October 24, 2017, across NJ and nearby environs, illustrating the banding characteristics of the rain cells. The precipitation scale is found in the lower right corner. Green shades exceed 1.00” (courtesy of the National Weather Service).

The major storm event of the month began with showers in the northeast and far south early on the 29th. Steady moderate to occasionally heavy rain spread statewide late in the morning and tapered off during the early morning of the 30th. This was the heaviest statewide rainfall event since April 30, 2014. However, aside from scattered roadway flooding and some streams and small rivers approaching bank-full status, the rain was generally welcome following what had been a dry fall. Portions of the NJ Highlands received the most rain, with Randolph Township stations topping the list at 5.42”, 5.39”, and 4.99” (Figure 2). They were followed by 5.28” and 5.25” at two Mine Hill Township sites. The map also shows a heavy swath of rainfall through central Monmouth and Ocean counties, with somewhat less further south and in portions of the Delaware Valley. Of the 232 CoCoRaHS reports, the four aforementioned sites received over 5.00”, while 45 locations saw 4.00”–4.99”, 109 from 3.00”–3.99”, and 74 from 2.08”–2.99”. The low 2.08” total was in Liberty Township (Warren). 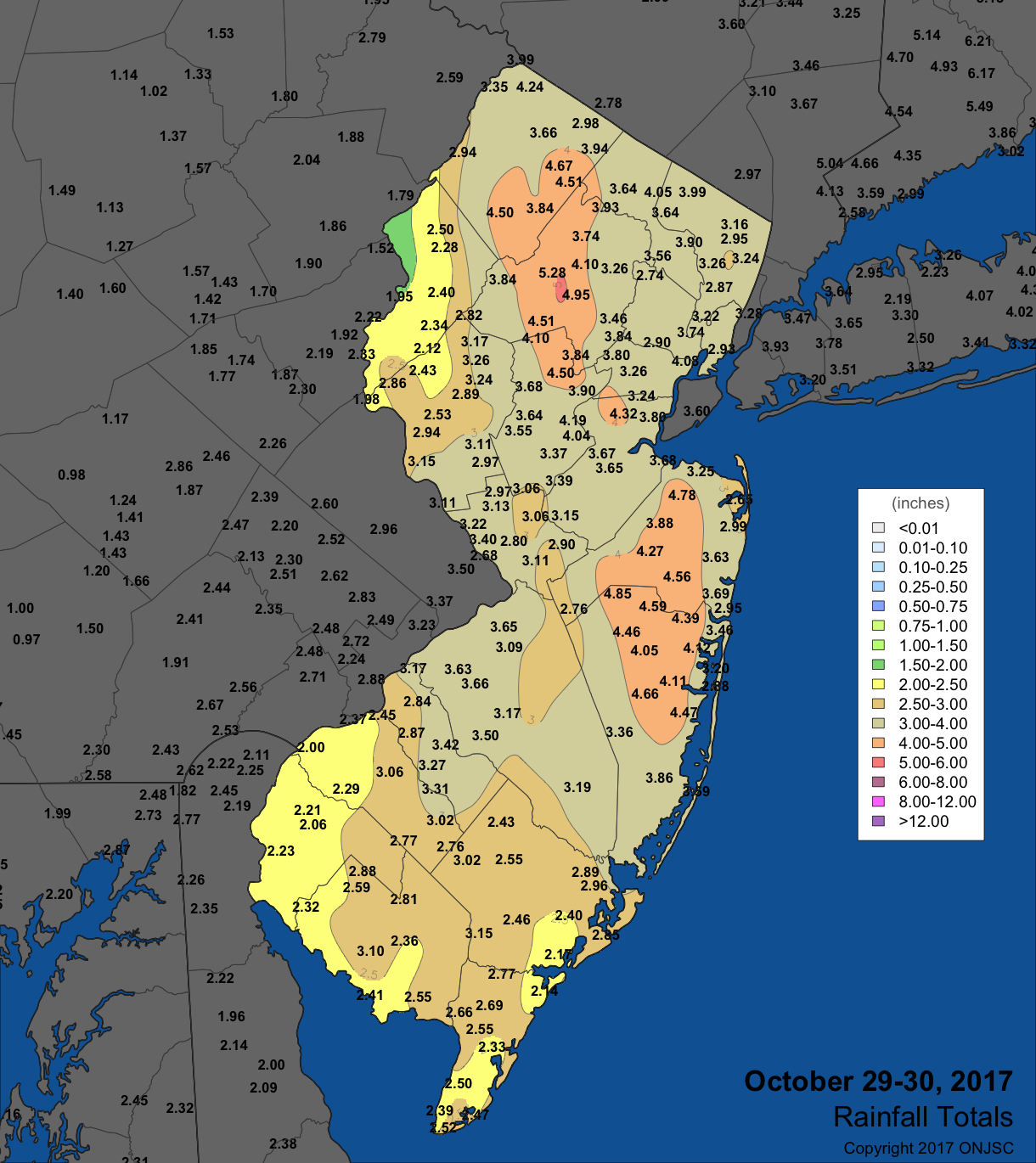 The storm “bombed” out (atmospheric pressure fell very quickly) along an advancing cold front, with pressure levels the lowest in the Garden State since Sandy, five years to the day prior to this storm. Locations in northeast Jersey fell to 28.85”–28.95”, while southern and far western areas were in the range of 29.00”–29.05”. Adding to the storm’s energy and moisture content were the remnants of short-lived Tropical Storm Philippe, which raced out of the western Caribbean and up off the East Coast late in the month. With the mid latitude low-pressure system came strong winds, particularly at the coast. This led to a storm surge along the northern Jersey coast approaching five feet, on par with that of Hurricane Irene in 2011. However, the surge coincided with low tide late on the 29th, thus water levels were only at about normal high tide level during the height of the surge. As the surge began to diminish, high tide began to arrive, thus the tide level rose to a minor flood level early on the 30th (Figure 2). Once the storm passed to the north, strong westerly/northwesterly winds developed, pushing water offshore, the result being abnormally low water levels later on the 30th into the 31st. Winds later on the 29th gusted to 52 mph at Harvey Cedars, 49 mph at Lyndhurst (Bergen), 48 mph in Seaside Heights (Ocean), 47 mph at the Atlantic City Marina (Atlantic), and 44 mph in Sea Girt. On the 30th, High Point Monument saw a gust of 53 mph, Fortescue 50 mph, and Pittstown (Hunterdon) 45 mph, with ten NJWxNet stations gusting between 40 mph–44 mph and 27 between 30 mph–39 mph. Trees and power lines were toppled, with several thousand customers losing power for a time. 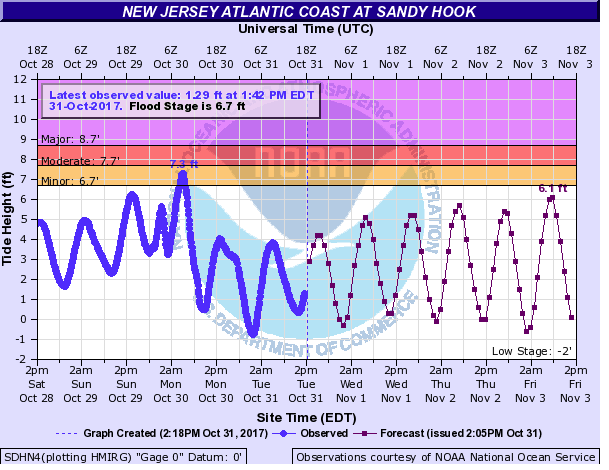 Figure 3. Observed (blue line) and forecast (dotted line) tide height at Sandy Hook from October 28 to November 3 showing the surge close to midnight on the 29th, the subsequent high tide level as the surge dissipated, and the low tide level during a strong offshore flow of wind following the surge (courtesy of NOAA).

In addition to the two late month storms, winds gusted to 40 mph at Seaside Heights and Atlantic City Marina on the 12th and to 51 mph at High Point Monument on the 16th. The highest barometric pressure in October was in the 30.60”–30.65” range on the 3rd.