October was a tale of two half-months. Summer-like weather prevailed through the 11th, quickly transitioning to fall-like conditions on the 12th. Passage of the first strong cold front of the season was responsible for the change. Moderate to heavy rain accompanied the front in northwest NJ during the daytime hours of the 11th. That evening, and into the morning of the 12th, moisture from the remnants of once major Hurricane Michael ran up against the front and brought heavy rain to south Jersey. This one-two punch was followed on the 17th by the first freezing temperatures of the season at a few locations and a more widespread freeze on the 19th. Generally cool conditions prevailed the remainder of the month. The remnants of yet another major hurricane, Willa, provided energy and moisture to a quick-hitting nor’easter on the morning of the 27th that brought some of the worst coastal flooding since Sandy in 2012. Michael was an Atlantic storm that made landfall in the Florida panhandle, while Willa was an eastern Pacific storm that came ashore on the west coast of Mexico.

Statewide, the average October temperature was 56.5°. This is 2.0° above the 1981–2010 average and ranks as the 24th warmest October since records were established in 1895. South Jersey (Mercer-Middlesex-Monmouth counties and all points south, except the immediate coast) was absolutely and comparatively milder than north Jersey, averaging 58.0° (+2.4°), versus 53.8° (+1.4°) up north.

Despite the two previously mentioned large rain events, statewide October precipitation was rather close to average. The total of 4.38” was 0.49” above average and ranks as the 34th wettest of the past 124 Octobers. South Jersey was a fair bit wetter than up north, averaging 4.66” (+1.03”) and ranking 29th wettest. North Jersey averaged 3.82” (-0.49”) and ranked 56th wettest. This is still above the 3.44” median October north Jersey precipitation, as monthly precipitation records are skewed toward values less than the mean.

A squall line dropped southward through the state late on the 2nd into the early hours of the 3rd to kick things off in October. It brought over an inch of rain north of Interstate 80 and close to 0.50” for most areas extending south from I-80 to the Atlantic City Expressway (Figure 1). Little to no rain fell south of the Expressway. Pea-size hail fell in Frenchtown (Hunterdon) and strong winds brought down trees and power lines in spots. Gusts reached 51 mph in Haworth (Bergen), 45 mph in Columbus (Burlington), and 40 mph at both Seaside Heights (Ocean) and Sea Girt (Monmouth). Fredon Township (Sussex) received the most rain, with 2.85” in the bucket. Andover (Sussex) caught 2.73”, Oakland (Bergen) 2.29”, Newton (Sussex) 2.17”, and Jefferson Township (Morris) 2.13”. 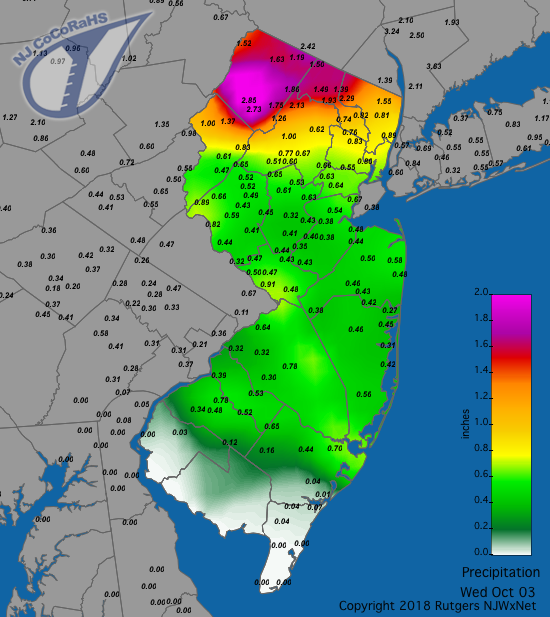 Figure 1. Rainfall from approximately 7 AM on the 2nd to 7 AM on the 3rd. Observations are from CoCoRaHS stations.

A very isolated heavy shower on the 9th deposited 0.72” and 0.85” at two Moorestown (Burlington) CoCoRaHS locations, but only 0.12” at the Moorestown NJWxNet station. Little fell elsewhere in the state. This was a minor precursor to the first of the two major October storms. This multi-faceted event began with a squall line moving into northwest Jersey during the afternoon of the 11th. The front stalled over southern NJ, while, what by this date was Tropical Storm Michael, approached southeast Virginia from interior North Carolina. Abundant moisture from the storm moved into south Jersey late on the 11th and, with some atmospheric lifting along the front helping out, brought heavy rain mainly southeast of the NJ Turnpike up to Middlesex County as Michael raced northeastward out into the Atlantic southeast of NJ. Rainfall in the northwest exceeded 2.00” in a few locations and was generally over an inch. South Jersey rainfall was in the 2.00”–4.00” range, with some notable higher amounts. Topping the list was Southampton Township with 6.52”, followed by 5.57” and 4.75” at two Stafford Township locations. Next came Hammonton at 4.52”, Pitman 4.21”, Medford Township (Burlington) 4.07”, and Estell Manor (Atlantic) 4.03”. Of the 216 statewide CoCoRaHS reports, 26 were between 3.00”–3.99”, 43 from 2.00”–2.99”, and 107 from 1.00”–1.99”. Woodbridge (Middlesex) was lowest at 0.60”. Not surprisingly, flash flooding and some stream and small-river flooding accompanied the heavy rain. So, too, did strong winds on the 12th that gusted to 58 mph at High Point Monument (Sussex), 46 mph in Woodbine (Cape May), Harvey Cedars (Ocean), and Lower Alloways Creek Township (Salem), 45 mph at Seaside Heights, 43 mph in Sea Girt and Fortescue (Cumberland), and 40 mph in West Cape May (Cape May). Twenty-seven other NJWxNet stations peaked from 30 mph–39 mph. This brought down some trees, limbs, and power lines, though power outages were not extensive. 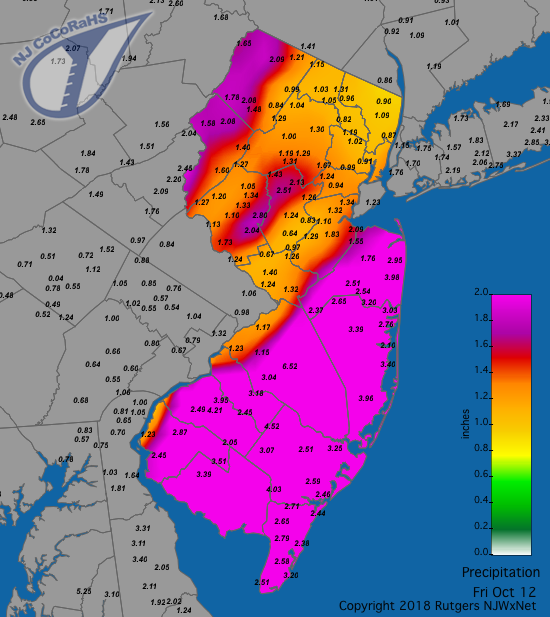 Figure 2. Rainfall from approximately 7 AM on the 11th to 7 AM on the 12th. Observations are from CoCoRaHS stations.

Light to moderate rain dampened NJ from the 15th into early on the 16th. The southern half of the state picked up 0.25”–0.50”, with top totals of 0.58” and 0.53” at two Stafford Township stations and 0.53” in Hammonton. The north saw less than 0.25”. While not noteworthy in terms of precipitation totals, light showers on the morning of the 21st included the season’s first observations of snow flurries in the hills of Sussex County and some ice pellets mixed with rain showers in Warren and Morris counties. 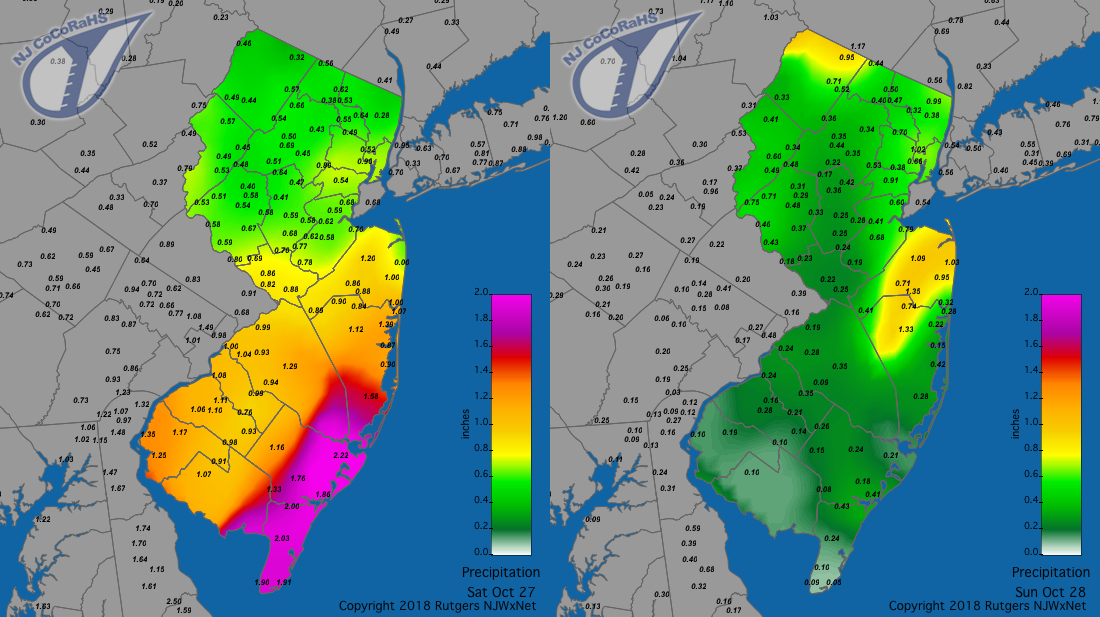 The major story associated with this storm was not the precipitation; rather it was the gale-force winds and accompanying moderate to borderline major coastal flooding at the time of high tide during the late morning on the 27th. Winds gusted over 40 mph at 16 NJWxNet stations and from 30 mph–39 mph at 21 others. The top gust of 62 mph occurred at Harvey Cedars, followed by 59 mph at Seaside Heights and 57 mph in Sea Girt (Table 1).

As mentioned previously, substantial flooding throughout coastal NJ occurred at the time of high tide on the morning of the 27th. At the oceanfront observing station in Atlantic City (Atlantic), the water level of 7.70’ was the 13th highest in well over 75 years of record (Figure 4, top). It was the highest since the blizzard of January 23, 2016, and just under a foot lower than the record high of 8.98’ during a major nor’easter on December 11, 1992. The 8.77’ water level at Sandy Hook (Monmouth) was the 12th highest in over 75 years of record (Figure 4, bottom). It was the highest since the massive 14.40’ peak from Sandy on October 29, 2012. It was only a little more than a foot from the second highest water level on record (10.08’) that occurred on both September 12, 1960, during Hurricane Donna and during the December 11, 1992, nor’easter. As a result of this surge, which fortunately occurred during only one tidal cycle, there was some minor structural damage, numerous road closings, and considerable beach erosion. 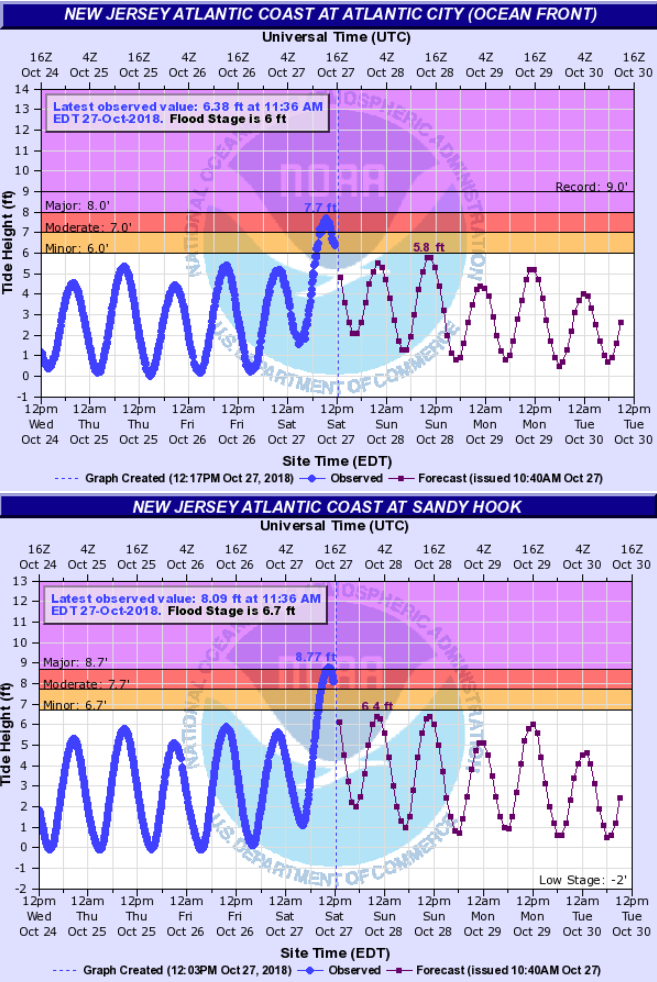 Eight of the first eleven days of October saw the maximum temperature exceed 80° at many of the 62 NJWxNet stations. Then in came the major cold front and even the warmest stations were hard pressed to record more than a few days over 70° during the remainder of the month. The 1st found five south Jersey stations up to 83°, with 20 others around NJ from 80°–82°. On the 2nd, Sicklerville (Camden) and Vineland reached 84°, with 35 stations from 80°–83°. Upper Deerfield, Woodbine, Lower Alloways Creek Township, and Vineland got to 82° on the 3rd. Impressive 87° maxima were recorded on the 4th at Moorestown (Burlington), Mannington Township (Salem), Upper Deerfield, and Vineland, with High Point Monument only reaching 69°. Cape May Court House (Cape May) hit 84° on the 7th, with eleven stations closely following at 83°. Upper Deerfield, Sewell, and Sicklerville reached 85° on the 9th. Most notable that day were warm daily minima of 70°–71° at 16 stations. Minima of 70°–73° occurred at 13 stations on the 10th, with an afternoon maximum of 87° in Moorestown and an impressive 53 NJWxNet stations topping out from 80°–86°. The last 80°s of the season occurred at 38 stations on the 11th, with Greenwich (Cumberland) warmest at 85°.

With this month’s split personality, eleven days saw the low temperature fall to the freezing point at more than one NJWxNet station. The first freezing temperatures of the season were observed at Walpack (Sussex) 31°, Basking Ridge (Somerset) 32°, and Pequest (Warren) 32° on the 17th. Meanwhile, down along the coast, adjacent still mild waters resulted in a minimum of 55° at West Cape May. These three stations are frequently the coldest in NJ on clear, calm nights when cold air “drains” into low-lying valley locations, creating atmospheric inversions with milder temperatures outside of the valley bottoms. On the eleven freezing October days, each of these stations joined in on ten of them. Meanwhile, there were just seven freezing days at High Point Monument, which, despite its 1803’ elevation, is often milder than valleys on nights with notable inversions. 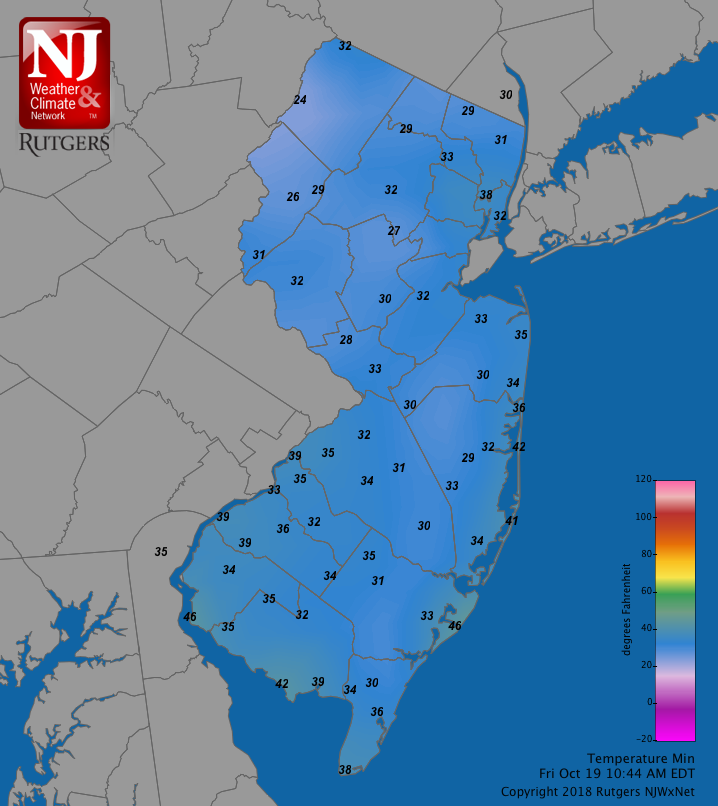 The mild temperatures of September and early October significantly delayed the fall color season throughout New Jersey. Reports from around the state suggest that peak color was one to two weeks late, with most trees outside of the higher elevations still retaining the majority of their leaves come the 31st.

The growing season is considered to be the count of days between the last freeze of the spring and the first freeze of the fall (counting neither of those freezing days). Of those stations having seen their first freeze in October, Walpack came in with the shortest growing season. The season began on May 2nd and lasted until October 16th, a total of 168 days. This compares with a shorter season of 144 days last year at Walpack (May 12th–October 2nd). Pequest was just a day longer, having the last freeze on May 1st and the first on October 16th. Meanwhile, as of October 31st, the longest ongoing growing seasons in the state were at Atlantic City Marina with 222 days (last freeze on March 22nd) and Harvey Cedars with 211 days (last freeze on April 2nd).