The summer of 2018 concluded on a warm, wet note across the majority of what was a persistently green Garden State throughout the season. The warmth dated back to late June, with frequent humid conditions and abundant showers from mid-July onward. There will be more on the entire summer at the end of this report. First a look at August, with a statewide average temperature of 76.8° coming in 3.8° above the 1981–2010 average. This was the second warmest August since 1895, falling just behind 2016 by 0.1° (Table 1). Nine of the 13 warmest Augusts during that 124-year interval have occurred since 2001.

Statewide, August precipitation averaged 5.63”. This was 1.53” above the 1981–2010 average and ranked as the 32nd wettest since 1895. It was the wettest August since the record wettest month in 2011. As is often seen in the summer, the majority of the precipitation fell in scattered showers and thunderstorms. This resulted in a wide range of monthly totals around the state, with some serious flash flooding occurring in several locations when moisture ladened storms parked themselves over an area for multiple hours. Where storms missed time and time again, rainfall totals were below average. The northern NJ climate division (Hunterdon, Somerset, and Union counties northward) saw their 10th wettest August on record, with an average of 8.28” falling. This is 4.17” above average. Since 1990, only August 2011 was wetter in this division.

The first 12 days of August found one or more of the 63 NJWxNet stations reaching a maximum temperature of 90° or hotter. The heat returned on multiple other occasions later on, with a final monthly tally of 20 days of 90° or higher maximums at one or more NJ location. As noted in a number of recent summers, it was not necessarily the extreme nature of the warmth that was most noteworthy. Rather, it was the persistence of warm conditions that were apparent. Starting off on the 1st, Oceanport (Monmouth County) reached 91° and Mansfield (Burlington) and Holmdel (Monmouth) 90°. Five stations rose to 91° on the 2nd, with ten to 90°. Mansfield was 91° on the 3rd and New Brunswick (Middlesex) 90° on the 4th. Mansfield made it to 95° on the 5th, with six stations at 94°. The 6th found Hawthorne (Passaic) topping out at 96°, Haworth (Bergen) and Lyndhurst (Bergen) 95°, and 47 stations from 90°–94°. Coastal Bivalve (Cumberland) and elevated High Point Monument (Sussex) each warmed to 84° on the 6th for the lowest maximums in the state. Hawthorne followed with 94° on the 7th and 8th, with Berkeley Township (Ocean) and Mansfield equaling that mark on the 8th. Seven stations rose to 91° on the 9th and nine reached 92° on the 10th. Lower Alloways Creek Township (Salem) hit 92° on the 11th, with Vineland (Cumberland) and Mansfield at 90° on the 12th.

Given the generally humid atmospheric conditions throughout most of the month, there were few nights where the temperature fell below 60°, even at the traditionally coolest locations in the state. The first 19 days of August only saw Pequest (Warren) and Basking Ridge (Somerset) fall into the 50°s at 58° and 59°, respectively, on the 10th. Cooler minimums prevailed from the 20th–26th, beginning with High Point Monument and High Point (Sussex) each at 58° on the 20th and Wantage (Sussex) 59°. Basking Ridge fell to 59° on the 21st. The 23rd saw Walpack (Sussex; back after a lengthy period of down time) at 52°, Pequest and High Point Monument each 54°, and 18 stations from 55°–59°. The coolest morning of August came on the 24th, when Berkeley Township and Pequest each dropped to 50°, Basking Ridge and Walpack reached 51°, and 44 stations were from 52°–59°. Seaside Heights (Ocean) was mildest at 66°. The 25th found Basking Ridge, Pequest, and Berkeley Township all down to 52°. Berkeley Township was 53°, and Howell (Monmouth) and Walpack 54° on the 26th, when Fortescue never dropped below 73°. High Point Monument and High Point bottomed out at 57° and 58°, respectively, on the 31st.

The month began with on-and-off again showers from the 1st to the 4th. The most rain fell north of Interstate 78, with the least near the coast. The heaviest episode during this period was from the afternoon of the 3rd into the early hours of the 4th. This included 5.18” in Hardyston, which was part of their leading four-day 6.54” total, and 4.84” in Andover (Sussex), second for the entire period at 5.64”. Other four-day accumulations included West Milford 5.49”, Franklin (Sussex) 5.47”, Liberty Township (Warren) 5.19”, and 5.13”, 4.94”, and 4.77” at three Blairstown (Warren) locations. Flash flooding closed roads and caused soil washouts in the worst hit locations, along with strong winds causing some tree damage. Of more than 200 observations, 58 CoCoRaHS stations received more than 3.00”, while 39 saw less than 0.50”.

Showers from the afternoon of the 8th to predawn on the 9th brought inch-plus rains from central Morris (Randolph 1.17”) to southern Bergen (North Arlington 1.62”, Lyndhurst 1.55”, Palisades Park 1.01”). This was a relatively minor precursor to a heavy band of rain that fell from northern Hunterdon northeast to Bergen during the afternoon and evening of the 10th, and especially from the morning into early afternoon of the 11th (Figure 1). Gloucester County, down the Atlantic City Expressway, to the coast also saw some 2.00” plus totals. Northwestern Essex, eastern Morris, and southern Passaic suffered damaging flash flooding as a result of the deluge. West Caldwell received 5.12”, Little Falls 4.03”, Boonton 3.83”, and Florham Park (Morris) 3.75”. Pittman (Gloucester) caught an impressive 4.76”. Little rain fell in the central portion of the state, along with far northern and southern reaches. 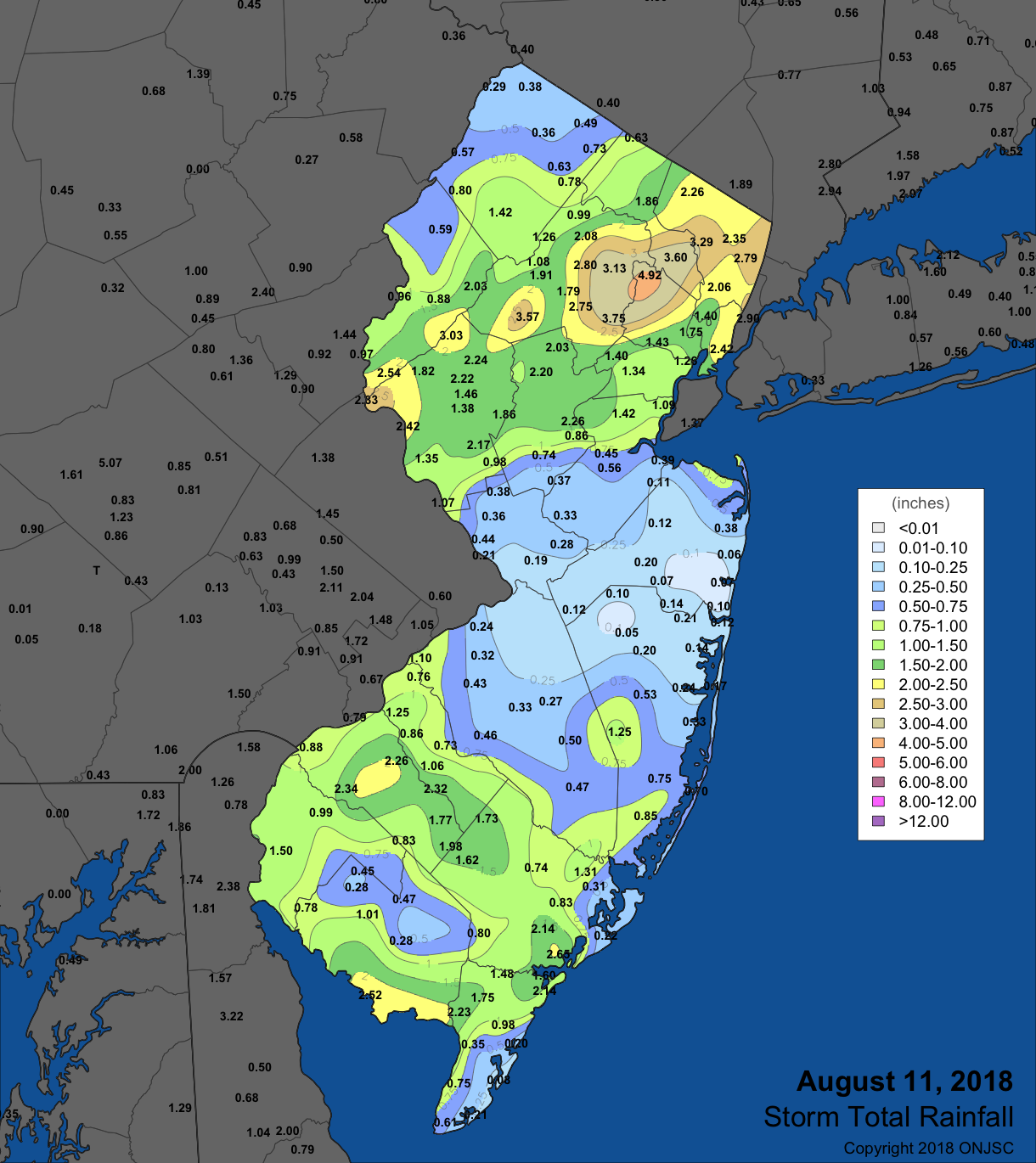 Figure 1. Rainfall on August 11th depicting where the heaviest rains fell. Observations are comprised of reports from CoCoRaHS, NWS Coop, and NJWxNet stations.

Local afternoon showers on the 12th brought 2.62” to Vineland and 1.28” at Buena Vista (Atlantic). This was yet another relatively minor precursor to a major event, and evidence that ample water vapor was moving back into the state. This moisture came unleashed during the morning of the 13th, with slow moving storms delivering enormous totals to northern Ocean and southern Monmouth counties (Figure 2). CoCoRaHS observers reported as much as 8.01” in Lakewood, 5.93” in Belmar (Monmouth), Brick (Ocean) 5.87”, Howell 5.56” and 5.17”, Wall (Monmouth) 4.93”, and Manasquan (Monmouth) 4.55”. Serious flash flooding resulted in a number of homes suffering considerable damage, along with numerous road closures. Just before 7AM, a waterspout was spotted off of Long Beach Island (Ocean), while around 10AM another occurred off of Seaside Heights. Elsewhere, a few locations in the south and northwest received inch-plus totals, while the areas hit hardest on the 11th were spared heavy rain. 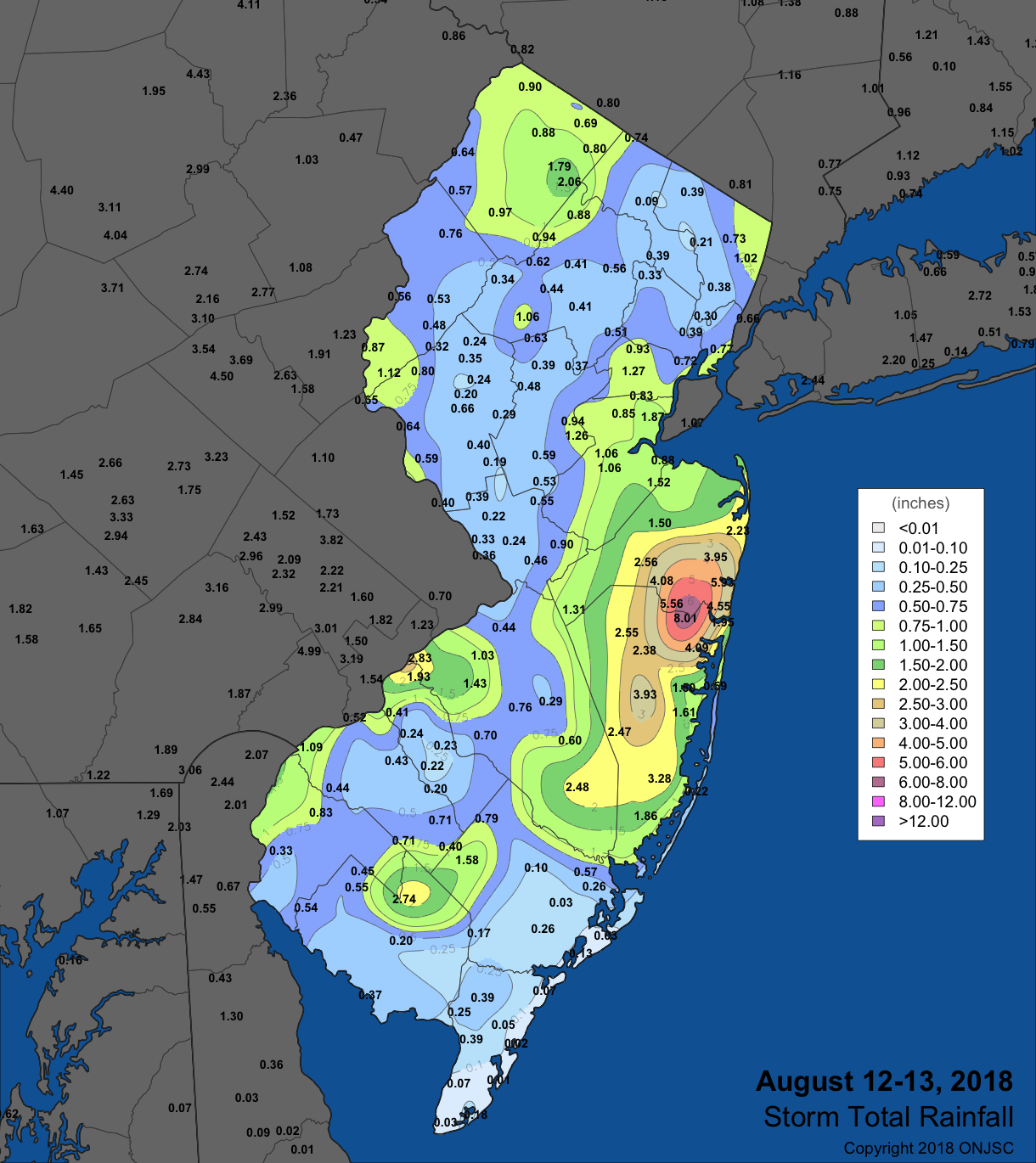 Figure 2. Rainfall from August 12th–13th depicting where the heaviest rains fell. Observations are comprised of reports from CoCoRaHS, NWS Coop, and NJWxNet stations.

Enough moisture remained in the area to bring scattered showers, mainly to areas along the Delaware Valley, during the daytime hours of the 14th. Greenwich Township (Warren) saw 1.05”, West Windsor (Mercer) 1.04”, and East Windsor (Mercer) 1.01”. Periods of rain from the 17th to 19th brought 2” totals to northeastern areas. Lines of showers occurred in central and northern areas on the afternoon of the 17th. Heavy predawn rain fell in Hunterdon and particularly Bergen counties on the 18th and northern areas saw heavy rain return in the afternoon and evening of the 18th. The far south and Monmouth County saw heavy rain early on the 19th, with rain tapering off to light showers by the afternoon. River Edge (Bergen), with 2.84”, caught the most during this extended interval, followed by Bridgewater (Somerset) at 2.56”, Long Hill (Morris) 2.34”, Glen Rock (Bergen) and Little Falls each with 2.31”, and River Vale 2.30”. There was some tree damage reported in Warren, Hunterdon, Somerset, and Passaic counties, with brief roadway and small stream flooding. The strongest wind gusts of the month were observed at Seaside Heights on the 18th, topping out at 61 mph in the midst of a thunderstorm that saw 0.50” of rain accumulate within 10 minutes of the gust being achieved.

Another period of showery weather began on the evening of the 21st in northern and central areas. Rain continued in the north and south (avoiding central areas) through predawn on the 22nd, with widely scattered afternoon and evening showers later that day. Over an inch or rain fell in the northwest and over Cumberland, Atlantic, and coastal Monmouth counties. The northwest saw the most, with 2.01” in Andover, West Milford 1.84”, Blairstown 1.71” and 1.61”, and Mansfield (Warren) 1.66”.

The final week of the month was generally dry, however, the predawn hours of the 31st provided one more shot of localized downpours. In this case it was a few areas in south Jersey, especially in central Burlington County, where Southampton was drenched with 3.58” and Tabernacle 1.98”. Elsewhere, Monroe Township (Gloucester) received 1.89” and Estell Manor 1.86”. There were some light showers after CoCoRaHS morning observing times on the 31st that were inconsequential to August totals and will be included in September numbers.

In addition to the previously discussed gust at Seaside Heights on the 18th, four other August days had winds gust to 40 mph or higher at NJWxNet stations. Fortescue gusted to 41 mph on the 2nd. On the 3rd, Pittstown (Hunterdon) reached 45 mph, Pennsauken 41 mph, and Cream Ridge (Monmouth) 40 mph. Kingwood (Hunterdon) topped out at 46 mph and Stewartsville (Warren) 50 mph on the 7th.

While summer heat did not arrive until the last half of June, it kept on through the remainder of the season. This resulted in a 74.3° seasonal average for the state, which is 1.8° above the 1981–2010 average. This ranks as the 5th warmest summer since record keeping commenced in 1895 (Table 2). An impressive nine of the ten warmest summers in the past 124 years have occurred since 1999.

On the precipitation side of the ledger, the statewide summer average of 14.90” is 2.22” above the 1981–2010 average. This ranks as the 38th wettest summer on record. Hot, humid conditions were common during the second half of the season, accompanied by a number of local deluges. In multiple cases, over five inches fell within hours, with many others depositing several inches. While the largest events were localized, that was no comfort to those trapped in flash flood waters or suffering home or auto damage. Fortunately, there were no reports of serious injuries or deaths resulting from these events. The northern counties received the most summer rainfall, filling most reservoirs at a time of the year when they are most often draining to 60%–80% of capacity. Hardyston led the way with 24.91” over the three months, which is over 200% of normal. The next four highest totals were 23.98” in West Milford, Chester Township 23.73”, West Caldwell 23.59”, and Mine Hill (Morris) 22.54”. Time and again, coastal southern NJ missed out on the showers. This left Sea Isle City with a summer total of 7.55”, lowest in the state. Elsewhere, Franklin (Gloucester) only caught 8.71”, Lower Township (Cape May) 9.21”, Egg Harbor City (Atlantic) 9.87”, and Wildwood Crest (Cape May) 10.18”. These totals are approximately one to three inches below average.