Following a cooler-than-normal November, it was back to the mild side in December, the ninth such month in 2021. However, much like November, the last month of 2021 was a top 10 dry one. An annual recap follows the December report where more will be said regarding annual temperature and precipitation. 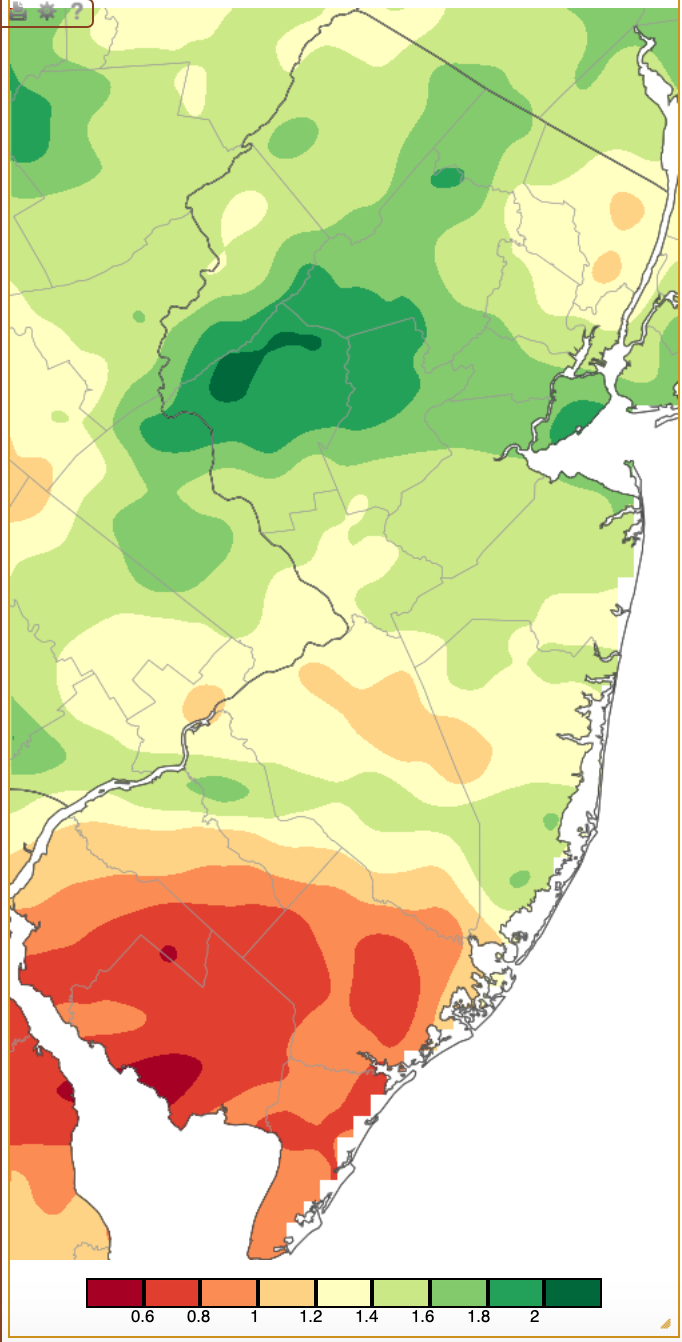 Figure 1. December 2021 precipitation across New Jersey based on a PRISM (Oregon State University) analysis generated using NWS Cooperative and CoCoRaHS observations from 7 AM on November 30th to 7 AM on December 31st. Note the scale in two-tenths of an inch at the bottom of the map. Totals range from 0.40”–0.60” (dark red) to 2.00”-2.20” (dark green).

Cumulatively, November and December came in with 2.32” statewide. This is 5.31” below normal and is as the driest such interval in the 127-year record book (Table 2). Nine decades are represented in the top 10 driest.


Table 2. The ten driest November–Decembers combined across NJ since 1895.

Much of New Jersey saw an absence of measurable snowfall, defined as 0.1” or more. The state climate office divides the NJ into northern, central, and southern divisions for snow, and monthly averages are generated from station data within each region. While no measurable snow fell in the south in December, the central area averaged 0.1” and the north 0.9”. For the central area, this is 4.7” below average and ties with three other years for the 12th least snowy since records commenced in 1895. In the north the departure was 5.2” below normal, making it the 22nd least snowy December, tied with four other years.


Table 3. The ten mildest Decembers across NJ since 1895.

The statewide average maximum of 49.7° was 4.7° above the 1991–2020 normal, ranking 5th mildest. The average minimum of 33.2° was 5.0° above normal and ranked 2nd. It is only one of three Decembers with minimum temperatures averaging above the freezing mark.

The 11th was a record-setting day for warmth at some long-term stations around NJ, such as New Brunswick (Middlesex). Most of interior southern, all of central, and northeastern NJ saw highs of at least 64° (Figure 2). This included 69° at Mansfield (Burlington), 68° at 13 stations, and 49 stations from 60°–67°. Coolest was coastal Harvey Cedars (Ocean) and HPM, each at 58°. 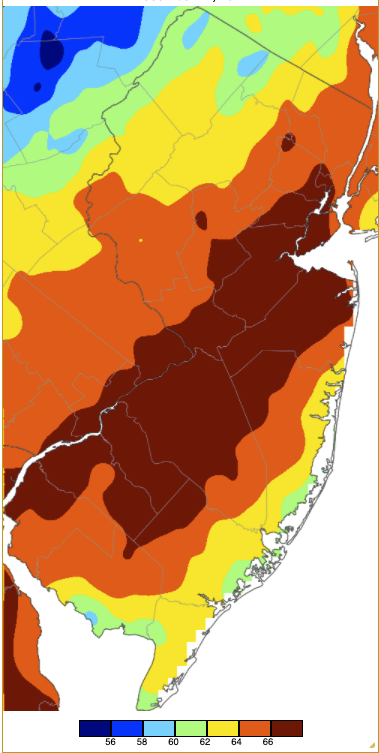 Figure 2. Maximum temperatures on December 11th based on a PRISM (Oregon State University) analysis generated using NWS, NJWxNet, and other professional weather stations. Note the 2 ° increment scale beneath the map.

While all but four December days found one or more NJWxNet station falling below freezing, only six days had lows of 20° or lower. The first was on the 9th when Walpack (Sussex) cooled to 17° and three stations to 20°. On the 15th Pequest (Warren) and Walpack hit 20° while Seaside Heights (Ocean) only fell to 49°. On the 19th, HPM dropped to 18°, High Point (Sussex) 19°, and both Pequest (Warren) and Vernon Township (Sussex) hit 20°. This was one of the rare days when all NJWxNet stations fell below freezing. This also occurred on the 20th, the coldest day of the month. Walpack bottomed out at 13°, Hopewell Township (Mercer) and Sandyston (Sussex) both were at 14°, and 32 stations were from 15°–20°. Seaside Heights was least cold at 28°. As seen in Figure 3, coastal and urban areas saw the mildest minimums. The 21st brought a low of 15° to both Pequest and Hopewell Township, with 15 stations from 16°–20°. Kingwood (Hunterdon), Pequest, Sandyston, and HPM were all 20° on the 23rd. 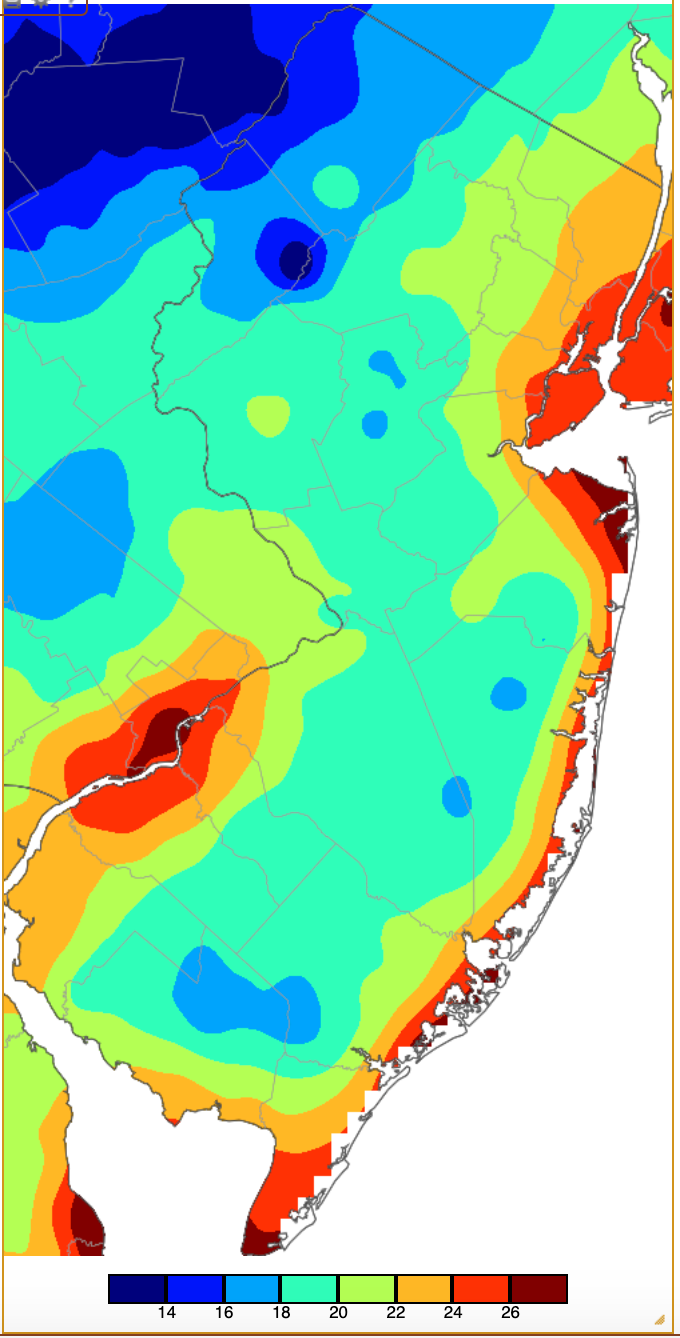 Figure 3. Minimum temperatures on December 20th based on a PRISM (Oregon State University) analysis generated using NWS, NJWxNet, and other professional weather stations. Note the in 2 °F increment scale beneath the map.

The four days without a freeze anywhere in the state included the 2nd (all stations 34° or milder), 11th (none colder than 35°), and to finish the month and year, the 30th (lowest 36° at the higher elevations of HPM, High Point, and Vernon Township), and the 31st, which was only as cold as 41° at the cold-air drainage lower elevations of Walpack and Berkeley Township (Ocean).

Not one NJWxNet or NJ CoCoRaHS station picked up more than a half to three quarters of an inch of rain or melted snow in any “storm” event in December. This, of course, explains the low monthly totals, though there were enough events for some stations to accumulate a little more than 2.00” during the month. This includes Bethlehem (Hunterdon) that topped the state with 2.28”. Other totals in the two-inch range included Clinton (Hunterdon) 2.17”, Greenwich (Warren) 2.11”, Holland Township (Hunterdon) 2.08”, and Frenchtown (Hunterdon) 2.00”. The driest locations in the south included Deerfield (Cumberland) with 0.47”, Upper Deerfield (Cumberland) 0.53”, Franklin Township (Gloucester) 0.65”, Buena Vista (Atlantic) and Egg Harbor City (Atlantic) each with 0.68”, and 0.76” in Egg Harbor Township (Atlantic), Northfield (Atlantic), Ocean City (Cape May), and Dennis Township (Cape May).

Measurable snow fell across northwest NJ and in some central and northeast locations early on the 24th. No location picked up more than 0.16” of melted precipitation, while snowfall amounted to as much as 2.1” in Frelinghuysen Township (Warren), 2.0” at Blairstown (Warren), and 1.7” in Jefferson Township (Morris). The final precipitation event of 2021 began late in the afternoon of the 28th and was off and on into the 30th. This was a cloudy, at times foggy end-of-year period that also saw some locations receive a little sleet. Precipitation totaled as much as 0.78” in Bethlehem, 0.70” at Clinton, 0.69” in Flemington (Hunterdon), and 0.67” in Bridgewater (Somerset). The southern third and northern quarter of NJ received less than 0.30”, with a swath from southern Warren County east to Union and northern Middlesex counties receiving over 0.50” (Figure 4). 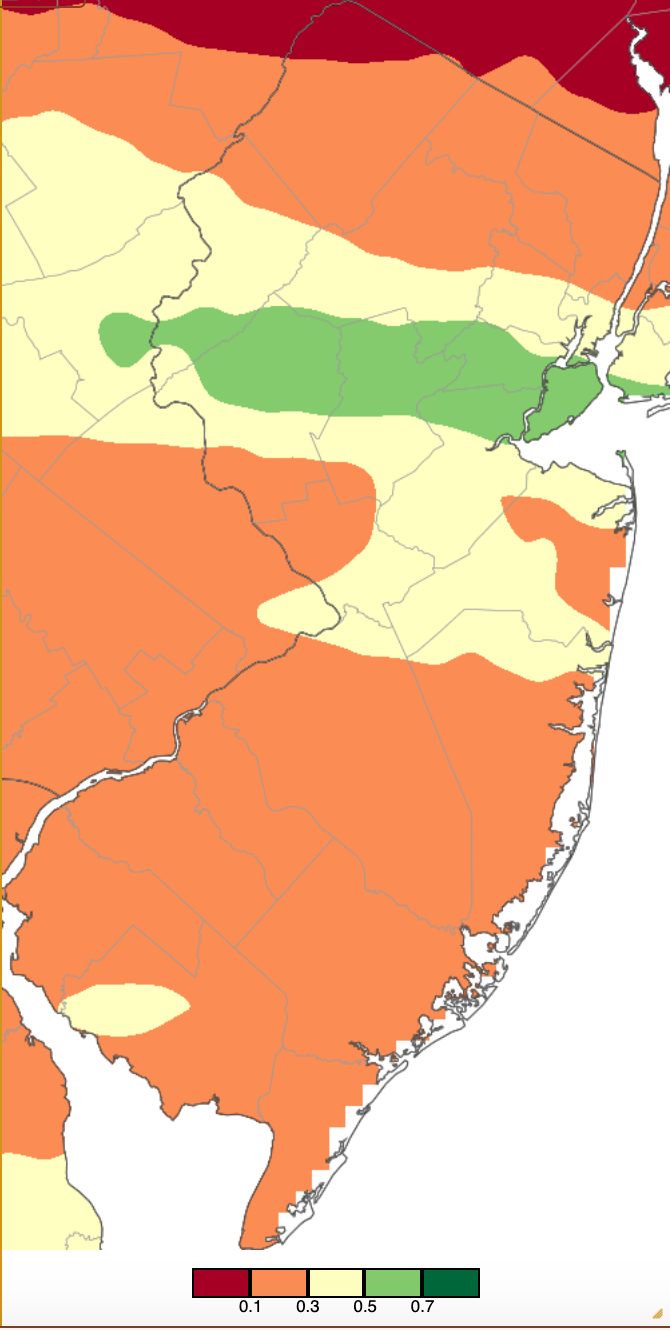 Figure 4. Precipitation across New Jersey from 7 AM on December 28th through 7 AM on December 30th based on a PRISM (Oregon State University) analysis generated using NWS Cooperative and CoCoRaHS observations. Note the scale in inches beneath the map.

The highest barometric pressure of December was reached on the 15th with readings across NJ in the 30.60”–30.70” range. The lowest pressure was 29.45”–29.50” on the 25th. In addition to the wind gusts mentioned in the squall on the 6th, ten other days saw NJWxNet stations gusting over 40 mph. The High Point Monument station, the rooftop of NJ if you will, was included on all but one of these days. HPM reached 51 mph on the 2nd, with four stations from 42–43 mph. The 3rd found HPM up to 52 mph while at sea level, Harvey Cedars peaked at 44 mph. The 7th saw Harvey Cedars up to 54 mph, Mullica (Atlantic) 41 mph, and Little Egg Harbor Township (Ocean) 40 mph.

Annual precipitation averaged 47.98”, which is 0.42” above the 1991–2020 normal and ranks 40th wettest. The southern portion of NJ (Middlesex to Mercer and all counties south of there, excepting coastal areas east of the Garden State Parkway) averaged 45.71” for 2021. This is 1.17” below average and ranks as the 53rd wettest on record. Looking more closely within that region, the far southeast and southwest areas were the driest, with the central coast and northern fringe wettest (Figure 5). The northern division averaged 51.64”. This is 2.92” above average and ranks as the 32nd wettest year out of the past 127. The coast averaged 46.14”, which is 0.44” below normal and ranks 47th wettest. 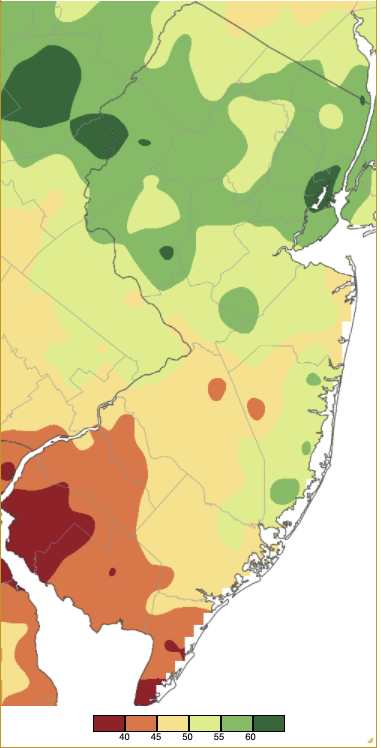 For the 13th consecutive year, we in the NJ state climate office have compiled what we feel were the most significant and impactful 10 weather and climate events of 2021. Click here to view the list.