In recent years, complaints have been voiced that New Jersey “never” has a real spring anymore. Now just what is meant by that comes into question, as some think spring should most often have sunny 70° days with a few April showers included now and again! However, the main point has been that in recent years NJ has seemingly gone right from winter to summer. Whether it was a cold March and record mild April in 2017 or a snowy March and chilly April 2018 followed by the 4th warmest May, the transition has been rapid. This year, despite April being quite mild, conditions did include a mix of chilly and warm spells, sunny and dreary days, and even some nasty spring thunderstorms and gusty winds. Vegetation greened up a week or so ahead of schedule, and with it there was far more pollen dispersed than many appreciated. However, the green up was not so early that there was a great threat from a late-season freeze. Though on the 29th, the blueberry crop closely escaped damage from a light frost and freeze during a vulnerable growth period.

Statewide, it was the 4th mildest April since records commenced in 1895. The 54.7° average was 3.8° above the 1981–2010 mean and ranked 4th mildest (Table 1). Six of the top ten and nine of the top 20 mildest Aprils have occurred since 2002. The average daily minimum temperature ranked 3rd highest and average maximum 10th.

Precipitation was about as average as can be. The statewide average of 3.95” was 0.04” below the 1981–2010 average and 0.22” wetter than the 1895–present average. It was the 43rd wettest April of the past 125 years, once again demonstrating how monthly precipitation totals tend to be skewed below the mean.

North and central portions of the state saw some sleet fall on 6th. However, there was no measurable snow or sleet during the month. Closing the books on this snow season, the seasonal snowfall for the state came in at 20.5”. This is 5.0” below the 125 year October to April average, ranking the 2018/2019 snow season as the 45th least snowy on record. Northern NJ averaged 30.7”, which is 3.1” below average. The central area had 19.4”, some 8.9” below average and the 33rd least snowy season. The south saw 15.7”, which is 3.9” below average.

The first eleven days of the month saw three precipitation events that deposited no more than a half inch of rain anywhere in NJ. The first began during the second half of the 5th and ended before dawn on the 6th. Some sleet mixed with rain at the beginning of the event and higher northwestern elevations had freezing rain lightly coat trees and wires, without any disruptions of traffic or power. White Township (Warren) precipitation totaled 0.46” and two Blairstown (Warren) stations received 0.44” and 0.43”. Most totals were in the vicinity of 0.25”, with less in far southern counties. Late on the 7th into the predawn of the 8th brought as much as 0.37” and 0.38” to two Ewing Township (Mercer) locations, as well as 0.37” in Lawrence Township (Mercer) and Brick (Ocean). Again, little to no rain fell in the south, and this time, little accumulated in the northwest. The third event occurred during the afternoon and evening of the 9th with some modest thunderstorms in portions of central and northern NJ. Kingwood (Hunterdon) saw 0.46” and Pennington (Mercer) 0.25”. Pea-size hail fell in Hunterdon County (Holland Township and Lambertville) and Warren County (White Township). West central areas saw the most, with little to none elsewhere.

Next up was an intense squall line on the 15th that raced eastward through the state between the hours of 3:00–5:00 AM. A burst of rain was accompanied by strong gusts, followed by a few hours of steady rain. Scattered showers of various intensities finished out the morning. Figure 1 is a radar image of the squall line as it was about halfway through the state, depicting well how all areas joined in on the tumultuous conditions. A very impressive gust of 81 mph was recorded at Lower Alloways Creek Township (LACT; Salem), with Logan Township (Gloucester) coming in with a 64 mph gust, Berkeley Township (Ocean) and Sea Girt (Monmouth) each at 61 mph, eight other NJWxNet stations from 51–56 mph, and 22 stations from 40–49 mph. The gusts were not long lasting but still caused tree, power, and some structural damage. They were collectively, and the LACT report especially, the strongest gusts since Sandy in October 2012. Among the 230 CoCoRaHS reports, 111 were between 1.00”–1.80” and 108 from 0.50”–0.99” (Figure 2). Blairstown and Vernon (Sussex) saw the least, with 0.34” and 0.35”, respectively. Wall Township (Ocean) received 1.80”, Flemington (Hunterdon) 1.63”, Lakewood (Ocean) and Brick each 1.60”, and Little Falls 1.55”. 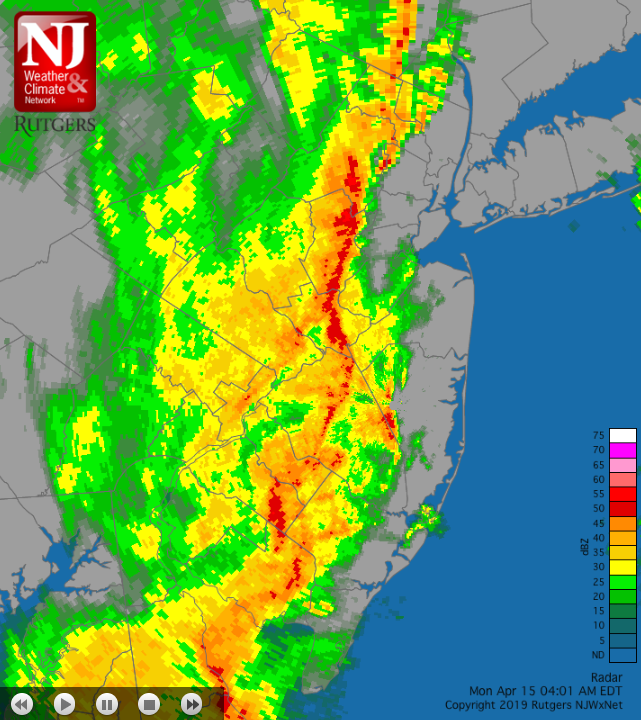 Figure 1. Radar image at 4:01AM EDT on April 15 showing the intense squall line and surrounding light to moderate precipitation that was rapidly moving west to east across New Jersey. 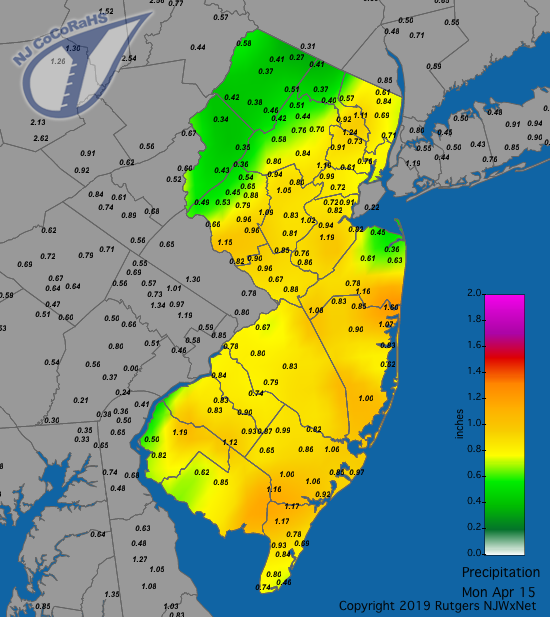 Figure 2. Rain from the evening of the 14th through early morning on the 15th. Some additional rain fell later the morning of the 15th but is not included in this figure. Observations are from CoCoRaHS stations.

An offshore low on the 22nd brushed eastern NJ with some showers that amounted to, at most, 0.32” at two Long Branch (Monmouth) stations and 0.29” in Glen Rock. The last soaker of the month began with some light rain late on the 25th before getting into high gear twice on the 26th. First were a few lines of mid-day storms racing south to north up the state. As a front arrived near sunset, a squall line moved eastward, accompanied by heavy rain, lightning, small hail, and strong winds. Southern areas saw the worst conditions, including scattered hail and winds gusting as high as 60 mph at LACT, which led to some minor damage. Elsewhere, High Point Monument (Sussex) reached 52 mph and four stations recorded 40–44 mph gusts. A Lower Township (Cape May) station caught 1.57”, with two other sites in the township seeing 1.35” and 1.40”. Pittsgrove (Salem) received 1.45”, Brigantine 1.42”, Hopewell Township (Mercer) 1.40”, and Washington Township (Gloucester) 1.37”. Of the 220 CoCoRaHS reports, 78 came in with 1.00”–1.57”, 112 between 0.75”–0.99”, and 30 from 0.46” (Manchester Township) to 0.74”.

In what was a rather windy month, in addition to the gusty winds previously mentioned on the 15th and 26th, there were ten other days with at least one NJWxNet station gusting to 40 mph. The 1st saw High Point Monument (HPM) at 44 mph, Pennsauken (Camden) and LACT each up to 42 mph, and Fortescue (Cumberland) 40 mph. On the 3rd, HPM reached 56 mph, Stewartsville (Warren) 46 mph, Seaside Heights (Ocean) 45 mph, and ten stations from 40–44 mph. HPM reached 46 mph on the 4th and 40 mph on the 9th. Berkeley Township topped out at 40 mph on the 12th and HPM 44 mph on the 16th. Winds on the 19th gusted to 44 mph in Woodbine (Cape May), 41 mph at both Harvey Cedars (Ocean) and Berkeley Township, and 40 mph in Pennsauken. A windy 20th found Dennis Township (Cape May) gusting to 50 mph, Harvey Cedars and HPM at 45 mph, Fortescue 44 mph, and Berkeley Township 40 mph. HPM hit 41 mph on the 24th. Yet another windy day saw HPM and Seaside Heights reach 52 mph on the 27th, with Pennsauken coming in at 51 mph, and 22 other NJWxNet stations gusting from 40–49 mph.

An examination of the 64 NJWxNet stations reporting temperatures in April found eight afternoons with temperatures topping out at 75° or higher at one or more locations. There were twelve days when the temperature fell to 32° or colder (April observations excluded the malfunctioning Walpack [Sussex] location, which was repaired on the 30th).

Berkeley Township and HPM hit the freezing mark on the 10th, with Sandyston and HPM 30°. Berkeley Township and High Point fell to 31° on the 11th. Pequest bottomed out at 30° and HPM 32° on the 16th. Sandyston saw a low of 32° on the 28th. A late freeze occurred in scattered areas of the interior on the 29th, perhaps the last one of the season for most or all locations. Pequest and Sandyston fell to 27°, Basking Ridge (Somerset) and Hackettstown (Warren) both to 29°, and eleven other stations were from 30°–32°. Mildest was Harvey Cedars at 45°.

The first warm day of April exploded onto the scene on the 8th, with Egg Harbor Township and Sicklerville (Camden) each making it to 84°. This ultimately proved to be the warmest temperature of the month. On the 8th, 34 other NJWxNet station rose to 80°–83°. Coastal Harvey Cedars did not join in, only reaching 65°. The thermometer in southwest Jersey and up the Delaware Valley reached close to 70° on the afternoon of the 9th (Figure 3). However, cool air off the Atlantic won out over the eastern two thirds of the state, keeping temperatures as cool as the mid-40°s along the northern coast. This epitomizes the atmospheric battle that often unfolds across NJ during spring afternoons. 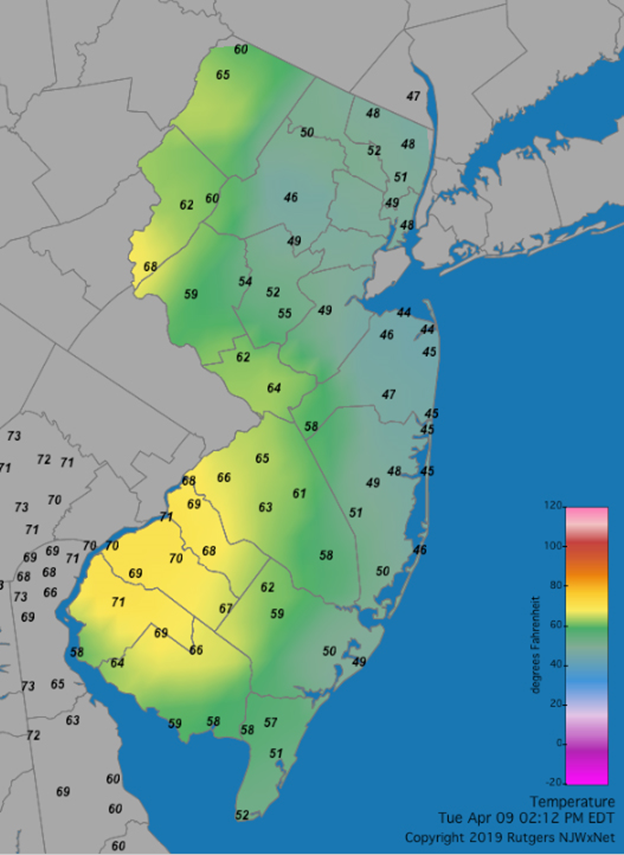 Figure 3. Temperatures across NJ at 2:12PM EDT on April 9th as observed at NJWxNet and Delaware Environmental Observing System sites.

Five afternoons from the 12th–19th saw temperatures over 75° at spots in the state. On the 12th, Sicklerville was 78° and Hamilton (Mercer) and Mansfield (Burlington) both 77°. Hawthorne (Passaic) hit 80° on the 13th, with four stations at 79°. Hawthorne stood alone at 76° on the 14th. The 18th dawned with quite uniform low temperatures in the upper 40 °s and low 50°s across NJ (Figure 4). However, come the afternoon, sunny skies caused temperatures soar to the low 80s in much of south Jersey, while clouds in the north and a sea breeze along the immediate coast kept temperatures in the mid 50°s to low 60°s. For the day, Howell (Monmouth) and Sicklerville made it to 83°, with 19 other stations from 80°–82°. High Point and Sandyston only reached 55°. Sicklerville’s daily minimum was 49°, giving that site a diurnal range of 34°, while at Harvey Cedars the range was only 8° (58° max/50° min). Six stations made it to 80° on the 19th. 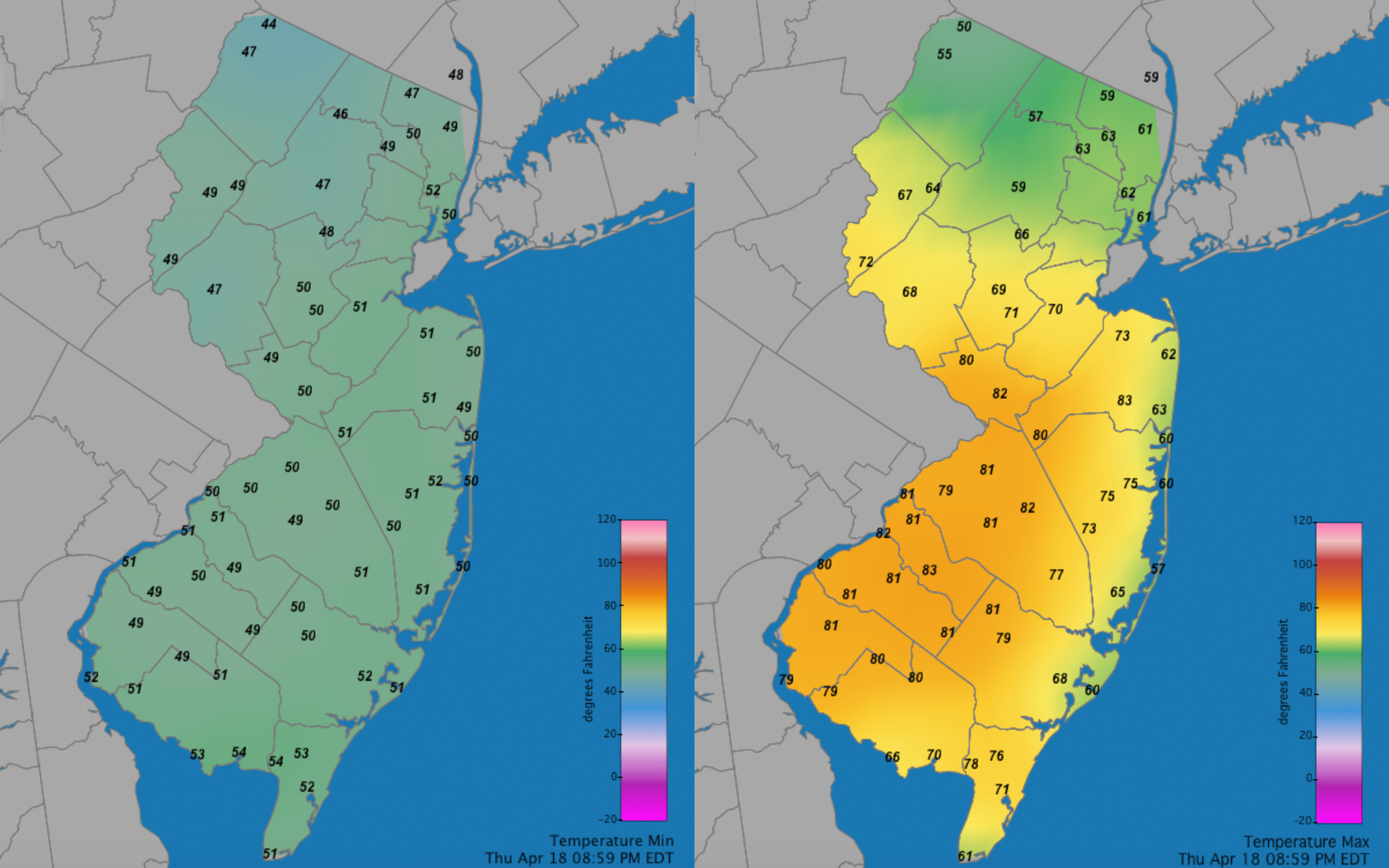 The 23rd brought maximums of 82° to Egg Harbor Township (Atlantic), Sicklerville, and Hamilton, with 21 other stations from 80°–81°. Woodbine and Sicklerville reached 75° on the 24th. Some warm air barely made it north into far southern NJ on the 30th. Woodbine topped out at 79° and Bivalve (Cumberland) and Cape May Courthouse (Cape May) rose to 78°. High Point Monument only made it up to 55°.