As reported multiple times during the first half of 2022, the day-to-day weather and overall climate of the Garden State have varied frequently, exhibiting lots of variability and never “locking” into a given pattern for an extended period of several weeks or longer. Such was the case this June, making it difficult to define any conditions that dominated. June was somewhat drier than average, but eight events brought over an inch of rain somewhere within the state. It was also dry enough at one point for a wildfire to scorch over 13,000 acres of the Pine Barrens. Low temperatures fell into the upper 30°s and low 40°s at multiple locations on the 20th, yet three days earlier, the majority of the state saw highs in the low to middle 90°s. “Non-descript” seems the best way to sum things up.

Figure 1. June 2022 precipitation across New Jersey based on a PRISM (Oregon State University) analysis generated using NWS Cooperative and CoCoRaHS observations from 7AM on May 31st to 7AM on June 30th. Note the scale in full inches at the bottom of the map. Totals range from 0.00–1.00” (dark red) to 8.00”–9.00” (dark green).

The wettest locations in June received several more inches than normal. As Figure 1 displays, these areas were not all that widespread. Among NJ CoCoRaHS and Rutgers NJ Weather Network stations, a location in Mount Olive Township (Morris County) was wettest at 7.69”. Another station in that community caught 6.78”. Other monthly totals exceeding 6.00” included Columbus (Burlington) with 6.77”, Haddon Heights (Camden) 6.30”, Cherry Hill (Camden) 6.26”, Moorestown (Burlington) 6.13”, and Mt. Ephraim (Camden) 6.08”. On the low end were multiple locations in Cumberland County coming in at more than 2.00” below normal, including Fortescue with just 0.72”, Vineland 1.17” and 1.65” at two locations, Deerfield Township 1.47”, and Maurice River Township 1.62”. Buena Vista (Atlantic) received 1.90” and Middle Township (Cape May) 1.91”.

Storms worked their way into NJ on the evening of the 1st, with rain continuing into the morning of the 2nd, especially in north and central areas. Rain resumed during the afternoon into the evening, some of it making it south. Figure 2 shows the total rainfall for this multi-stage event, the paths of storms well depicted. The first portion of the event brought a small area of heavy rain to western Morris and eastern Warren counties totaling as much as 4.31” and 3.56” at two Mount Olive gauges. Chester Township (Morris) caught 3.50” and Harding Township (Morris) 3.07”, while 13 locations had 2.00”–2.99” and 89 sites 1.00”–1.99” (out of 270 CoCoRaHS reports). Many southern locations caught nothing in the first round. Round two saw Winslow Township (Camden) catch 1.75”, Monroe Township (Gloucester) 1.55”, and Tenafly (Bergen) 1.32”. Most other locations saw less than 0.55”. Storms in round one downed some trees and power lines in Middlesex County. Round two saw winds gusting to 43 mph at Silas Little (Burlington) and 41 mph at Lower Alloways Creek Township (Salem), with trees and powerlines down at spots in Burlington and Ocean counties. 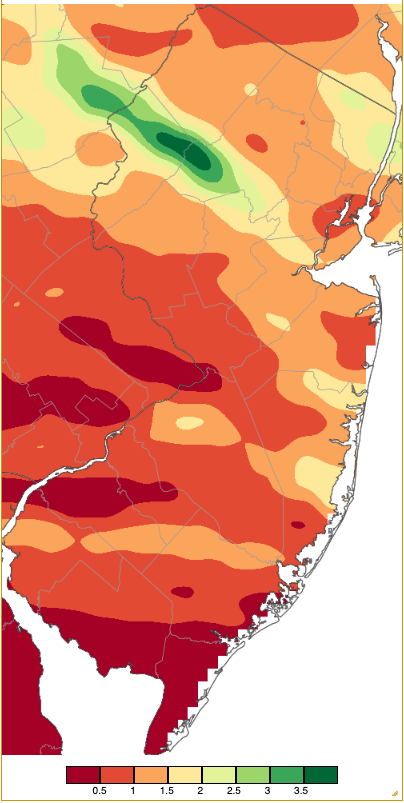 Figure 2. Precipitation across New Jersey from 7AM on June 1st through 7AM June 3rd based on a PRISM (Oregon State University) analysis generated using generated using NWS Cooperative and CoCoRaHS observations. Note the scale in inches beneath the map.

Following a dry week, rain returned late on the 8th into early on the 9th. The majority of NJ received over a half inch in thunderstorms, while the main action was in portions of the southwest, where Mt. Ephraim received 2.18”, Barrington (Camden) 1.73”, and Mansfield (Burlington) 1.70” (Figure 3). Of 264 CoCoRaHS reports, 40 were from 1.00”–1.99” and 129 from 0.50”–0.99”. A 43-mph gust occurred in Lower Alloways Creek Township, with trees falling on cars and homes in Burlington, Gloucester, and Camden counties. Of greatest note was a short-lived EF-1 tornado that cut through a neighborhood in the Pine Hill section of Gloucester Township (Camden). It touched down at 4:59 AM, was 60 yards wide and was on the ground with its estimated 90 mph maximum winds for 0.26 miles. This was New Jersey’s second tornado of 2022. For more information on this and other historical NJ tornadoes, check out our tornado climatology page here. 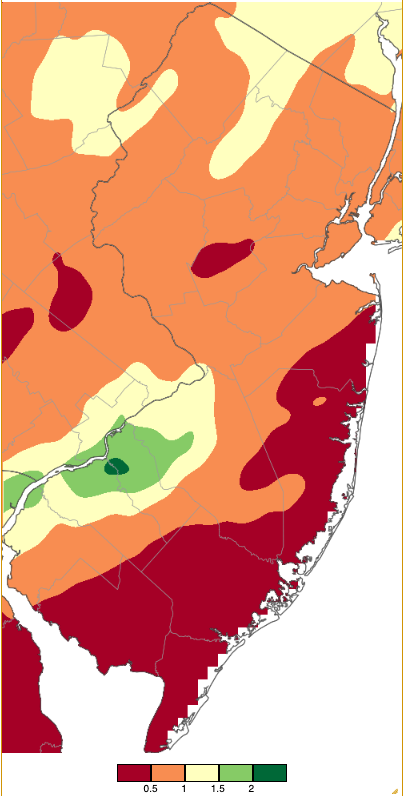 Figure 3. Precipitation across New Jersey from 7AM on June 8th through 7AM June 9th based on a PRISM (Oregon State University) analysis generated using generated using NWS Cooperative and CoCoRaHS observations. Note the scale in inches beneath the map.

Next up was a system that first delivered light rain during the second half of the 11th that became heavier during the morning of the 12th across northern Burlington and Ocean counties before finishing up with scattered showers the second half of the 12th. While the majority of the state receive less than 0.25”, moderate to heavy totals occurred in the aforementioned counties (Figure 4) and in a northern swath. Southampton (Burlington) came in with 2.64”, two Toms River (Ocean) sites received 2.64” and 1.76”, Pine Beach (Ocean) had 2.16”, two Medford Township (Burlington) gauges caught 1.69” and 1.73”, and 33 stations had 1.00”–1.68”.

Figure 4. Precipitation across New Jersey from 7AM on June 11th through 7AM June 13th based on a PRISM (Oregon State University) analysis generated using generated using NWS Cooperative and CoCoRaHS observations. Note the scale in inches beneath the map.

An interesting almost due north-to-south flow of showers occurred on the 21st to 22nd. This first deposited light rain in northeast to the northern coast. The action later shifted west, with greater than 0.50” falling in Hunterdon, Warren, and western Sussex counties. Finally, the rain shifted to a more common northwest to southeast track on the 23rd. The full episode brought as much as 1.30” to Newton (Sussex), Montague (Sussex) 1.19”, Andover (Sussex) 1.08”, Hackettstown (Warren), and 0.50”–0.99” at 41 stations. A large majority of NJ locations received less than 0.25”. 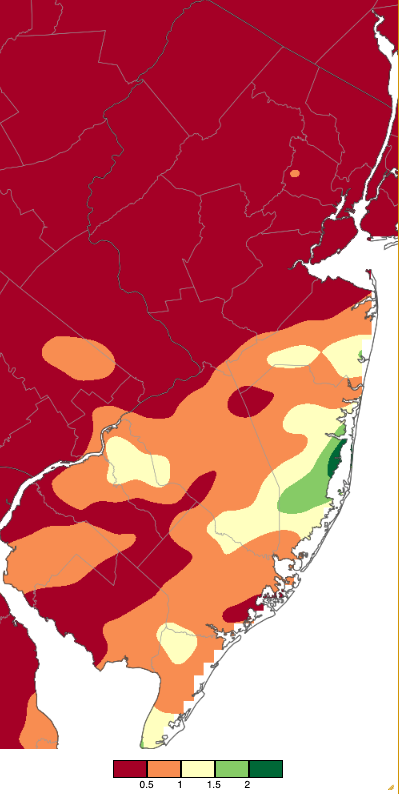 Figure 5. Precipitation across New Jersey from 7AM on June 27th through 7AM June 28th based on a PRISM (Oregon State University) analysis generated using generated using NWS Cooperative and CoCoRaHS observations. Note the scale in inches beneath the map.

There were two June days with gusty winds that were not mentioned in the previous storm section. These winds played a role in the spread of what became NJ’s largest wildfire since 2007. The strength of the winds is reflected in the gusts at High Point Monument (Sussex) of 47 mph on the 18th and 43 mph on the 19th. Most of the state saw gusts in the 20 mph to 39 mph range these days and into the 20th–21st. The earlier winds helped transfer dry air into NJ and contributed to a drying out of vegetation. Later winds helped to fan the flames and spread a powerful wildfire that originated in the Washington Township (Burlington) portion of Wharton State Forest either later on the 18th or on the 19th, possibly from an incompletely extinguished campfire. While temperatures were not exceedingly high, sunshine was abundant (helping dry the ground), humidity was quite low (especially for mid-June), and then there was the strong northwesterly wind. Named the Mullica River Wildfire by the NJ Department of Environmental Protection’s Forest Fire Service, the fire was intense as seen from the ground (Figure 6) and a satellite channel was able to identify the hot footprint of the fire (Figure 7).

Contained by the 21st, the fire eventually covered over 13,500 acres (final acreage is not yet available), with smoke spreading out to the southeast well out into the Atlantic as seen in a visible satellite image (Figure 8). Smoke was easily recognized on radar imagery (Figure 9). This was New Jersey’s largest wildfire since the Warren Grove fire consumed 15,500 acres in southern Ocean and Burlington counties in mid-May 2007. It is likely to be ranked as the 17th largest back to at least 1926 (see here). Fortunately, it occurred in a sparsely inhabited region, thus no deaths or significant injuries were reported, and no major structures destroyed. 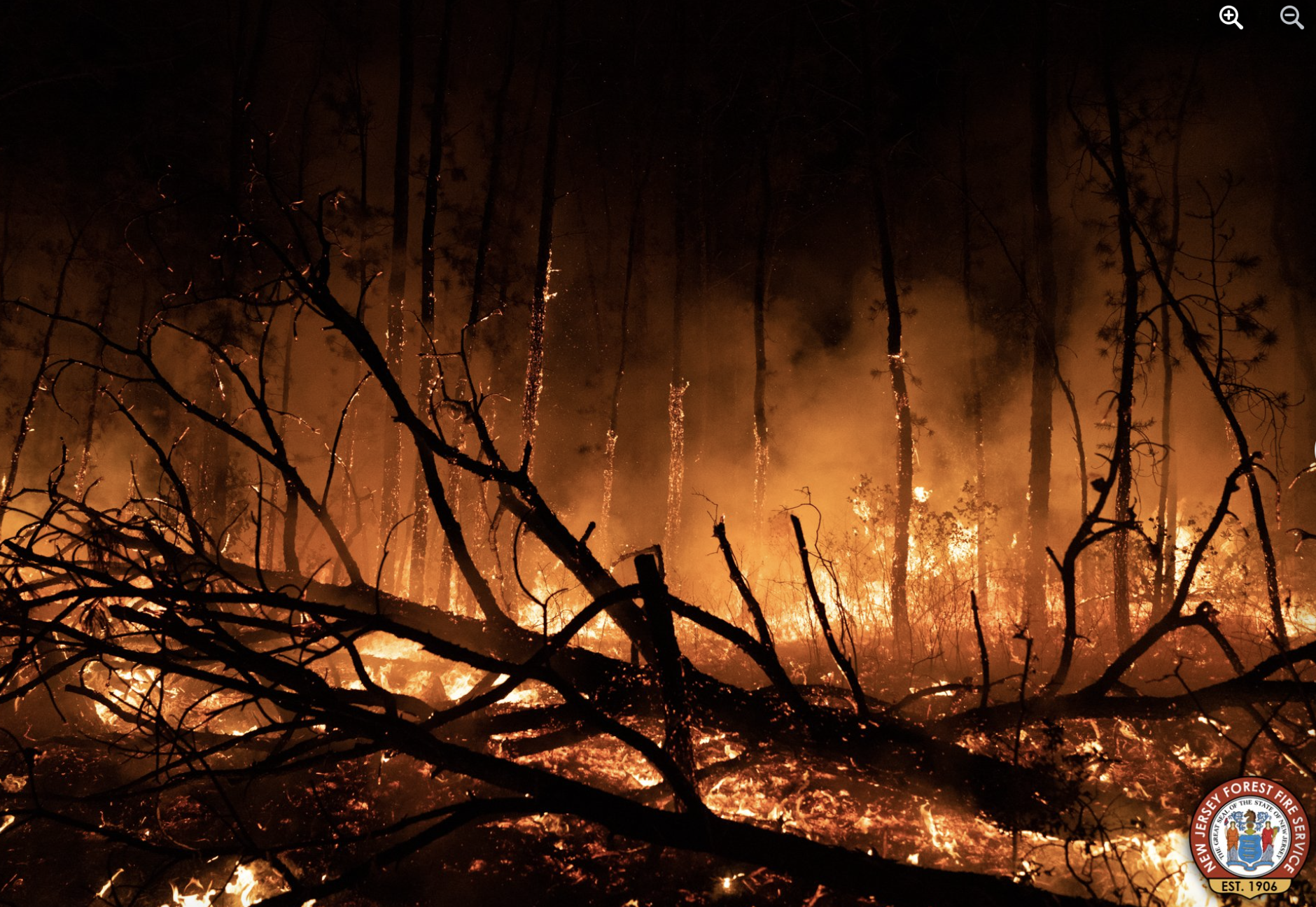 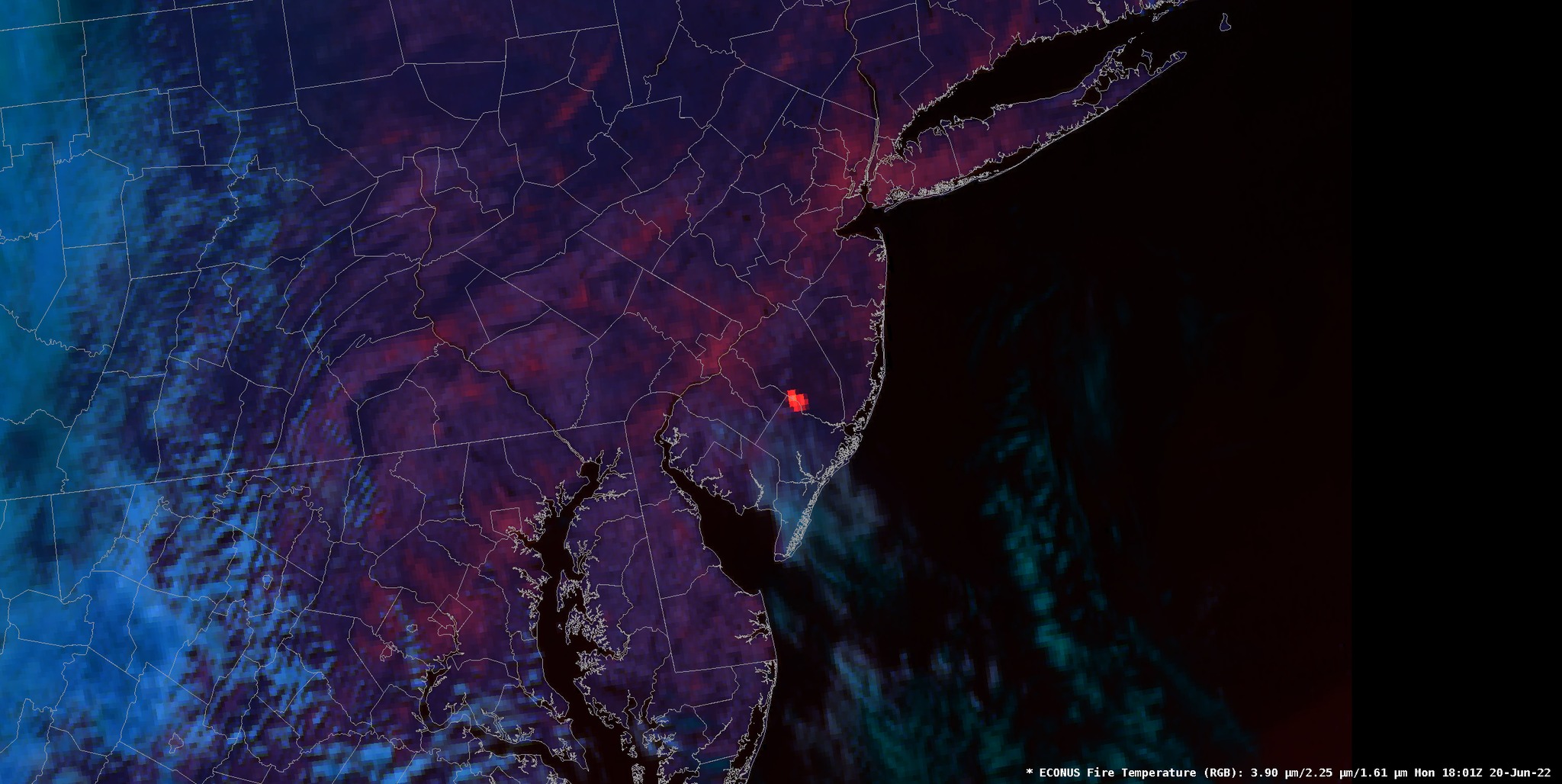 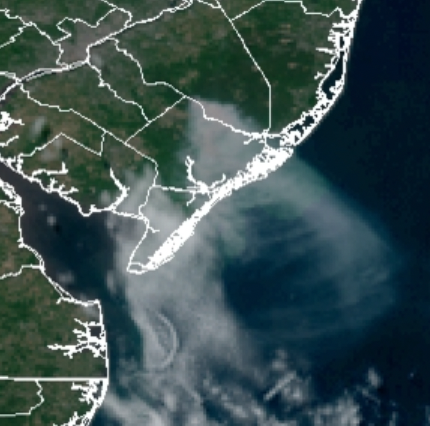 Figure 8. Visible satellite image of wildfire smoke at 12:36 PM on June 20th. Clouds are also seen over eastern Cumberland and most of Cape May county southeastward, located south of the smoke plume (NOAA). 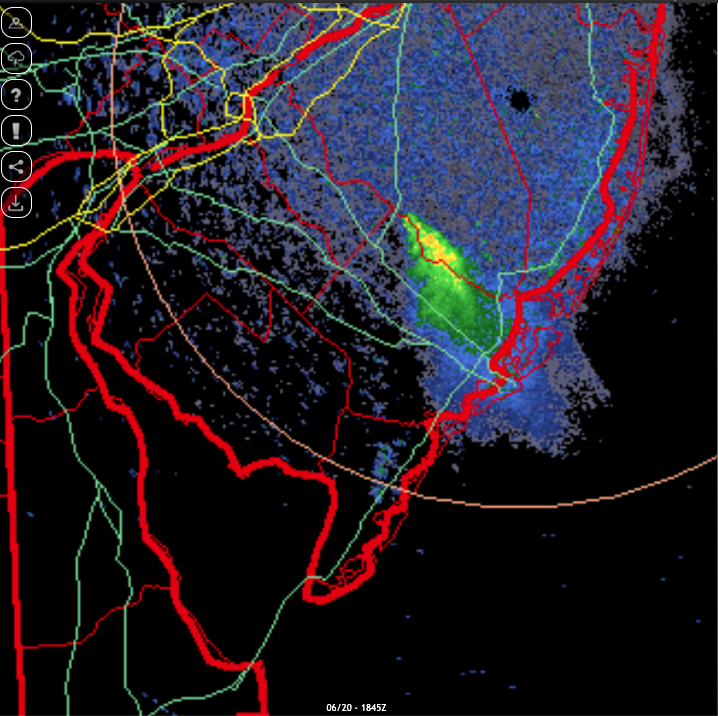 Another fire on the 26th covered 315 acres. Deemed the Brick Works Wildfire, it occurred in the Manchester Township (Ocean) portion of Brendan Byrne State Forest.

Figure 10. Maximum temperatures on June 17th based on a PRISM (Oregon State University) analysis generated using NWS, NJWxNet, and other professional weather stations. Note the in 2-degree increment scale beneath the map.

There were eight mornings that cooled to 45° or lower somewhere in the state. On seven of those days, that “somewhere” included the Walpack valley station in Sussex County. Sandyston (Sussex) reached 45° on the 4th. Walpack was 40° and Sandyston 41° on the 5th. Walpack dropped to 42°, Sandyston 43°, and Berkeley Township in the Pinelands also 43° on the 6th. The four-day cool spell ended with Walpack at 44° on the 7th. Another four-day cool interval began with 43° at Walpack on the 18th. Walpack reached 37° on the 19th, while in the far south, West Cape May (Cape May) only dropped to 61°. The 20th was quite a late date to have the coolest morning of the month. However, again, as mentioned in the previous section, humidity levels were unusually low, permitting any warmth from the prior afternoon to escape to space rather easily. Walpack again fell to 37°, Sandyston reached 39°, and ten NJWxNet stations were from 40°–45° (Figure 11). The warming coastal waters helped keep the low at 60° in West Cape May and Lower Alloways Creek Township. The 21st saw Walpack at 42° and Sandyston 45°. 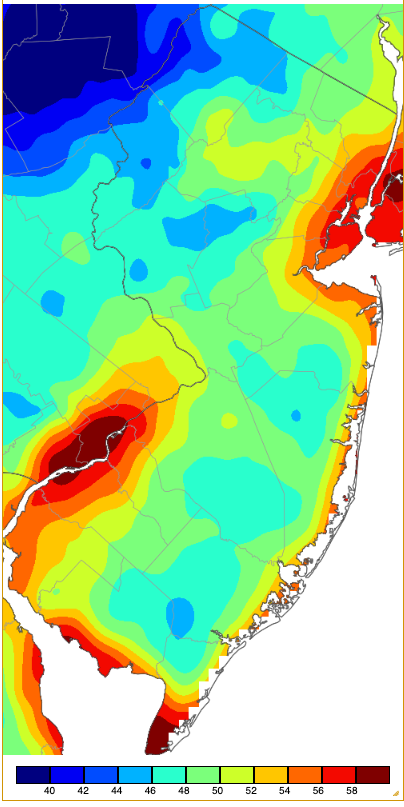