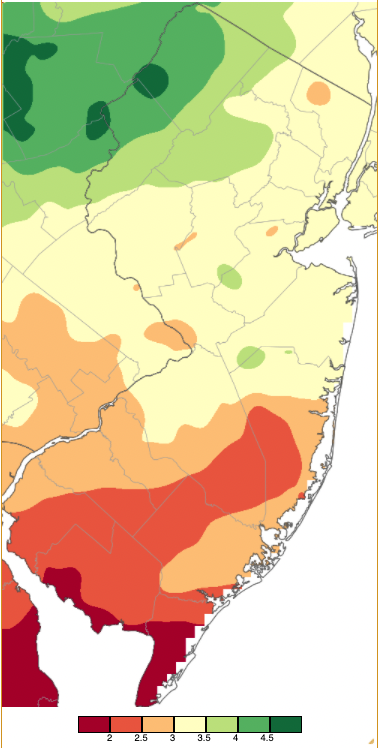 Figure 1. February 2022 precipitation across New Jersey based on a PRISM (Oregon State University) analysis generated using NWS Cooperative and CoCoRaHS observations from 7AM on January 31st to 7AM on February 28th. Note the scale in inches at the bottom of the map. Totals range from 1.50”–2.00” (dark red) to 4.50”–5.00” (dark green).

The morning of the 3rd began with light rain and foggy conditions across the Garden State. Fog, with light to moderate rain, continued into the evening. It was rain again during the morning and afternoon of the 4th, some of it freezing in the north, until a front moved through from north to south, rapidly dropping temperatures upwards of 20 degrees. Some light snow fell along the coast during the evening, with little or no accumulation. The northwest was, by a large margin, the wettest region of NJ during this extended event, with 2.54” accumulating in Knowlton Township, Frelinghuysen Township 2.47”, Hackettstown (Warren) and Blairstown each 2.46”, and Stillwater Township 2.41” (Figure 2). Of 225 CoCoRaHS reports 19 came in from 2.00”–2.54” and 145 from 1.00”–1.99”. 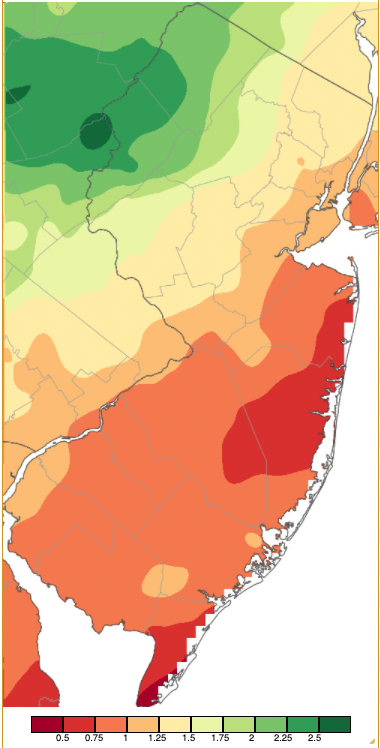 Figure 2. Precipitation across New Jersey from 7AM on February 3rd through 7AM February 5th based on a PRISM (Oregon State University) analysis generated using NWS Cooperative and CoCoRaHS observations. Note the scale in inches beneath the map.

Periods of light snow amounting to no more than a few tenths of an inch fell in the north during the morning of the 7th. The evening saw rain fall, especially in the southeast. Maurice River Township (Cumberland) received 1.06”, Wildwood Crest 0.83”, and three Lower Township sites caught 0.80”, 0.73”, and 0.69”.

The only plowable snow of the month fell in northern and central areas during the morning and afternoon of the 13th, later leaving a dusting further south. All 21 counties saw at least one location receive a measurable amount (0.1” or more), with 11 receiving 3” or more, and Sussex and Warren counties with 4.0”–5.0” totals (Figure 3). Hardwick (Warren) and Sparta each measured 5.0”, Highland Lakes (Sussex) 4.6”, Harmony (Warren) and Knowlton townships 4.5”, and Andover (Sussex) 4.4”. A visible satellite image on the 15th showed the distribution of snow cover across northern, central, and southwest Jersey locations but snow-free ground in the southeast (Figure 4). 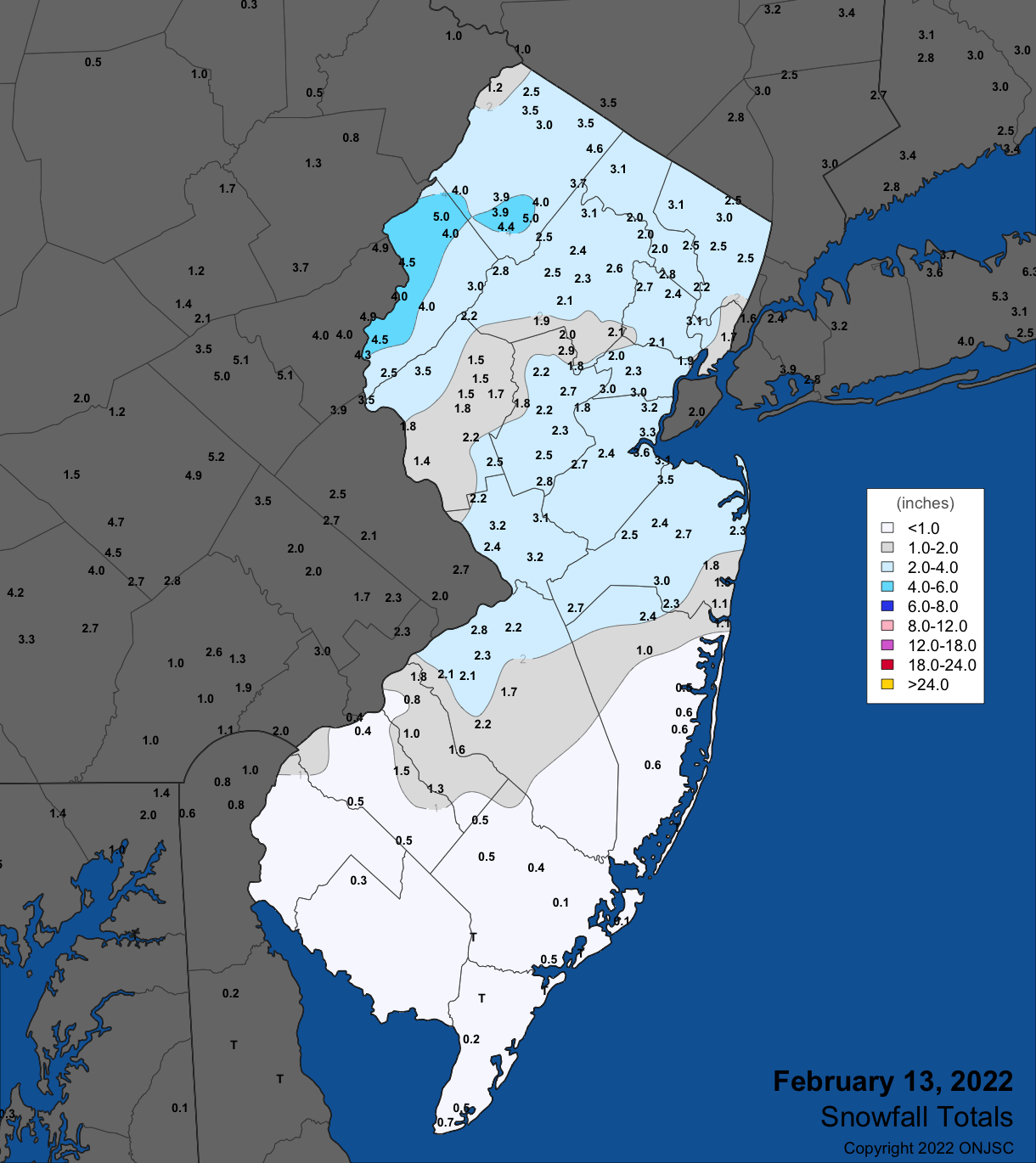 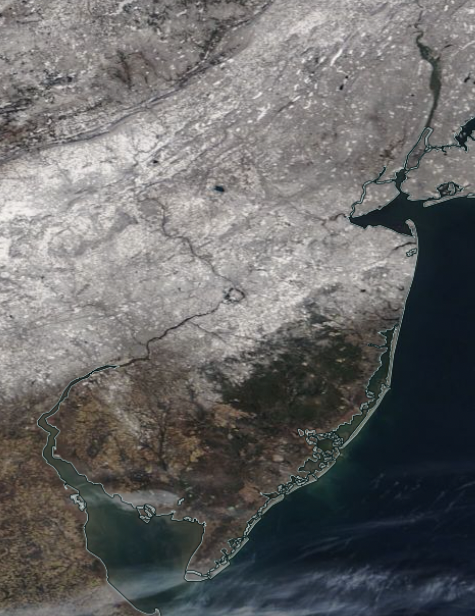 Figure 4. NASA MODIS visible satellite image showing snow cover across northern, central and parts of southwest NJ and surrounding areas to the east, north, and west on the morning of February 15th. The only cloud cover is seen along the central Delaware Bay coast and in the region close to Cape May (Cape May). 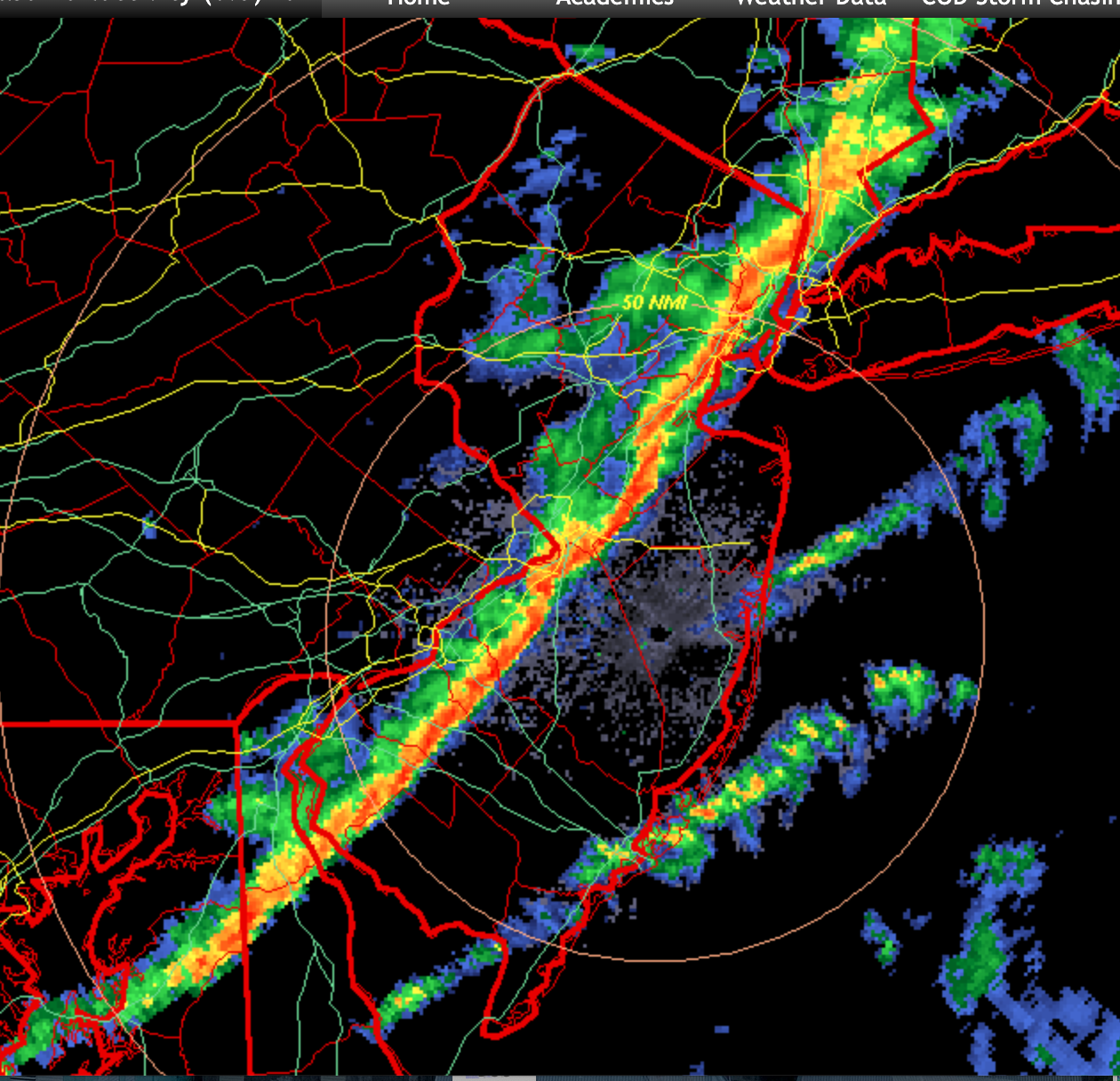 Figure 5. Radar image showing a squall line moving across the state at 6:24 AM on February 18th. Courtesy of the College of DuPage. 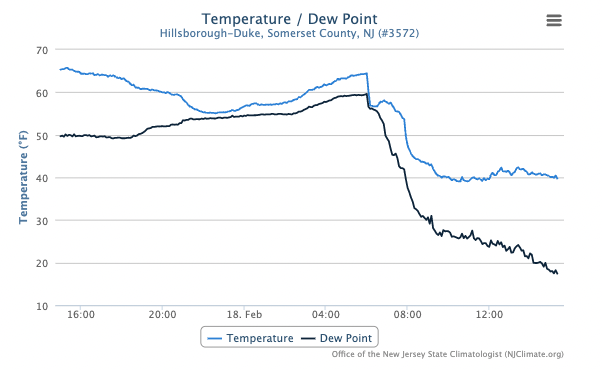 The highest barometric pressure of February was reached on the 16th with readings from 30.70”–30.75”. The lowest pressure of the month followed on the 18th at 29.30”–29.45”. This rapid pressure transition explains the strong winds during this period.

There were nine February days when high temperatures at one or more NJWxNet station reached or exceeded 60°. The first day was the 4th when Mannington (Salem) reached 61° and three NJWxNet stations 60°. Daily highs were achieved just before a cold front moved southward through the state, leading to rapid temperature declines of 20 degrees, as illustrated by the time series at the Charlotteburg (Passaic) NJWxNet station (Figure 7). The next day, High Point Monument only made it to 15° for a high. 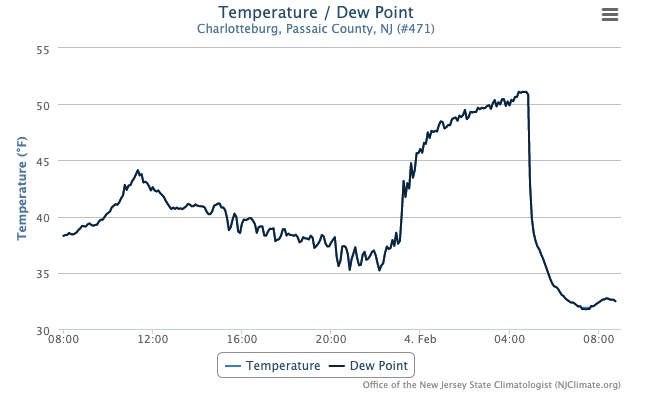 Figure 7. Time series of temperature and dew point temperature at Charlotteburg from 8:50 AM on February 3rd until 8:50 AM on the 4th. Here, moist conditions resulted in the dew point fluctuating in unison with the air temperature throughout the interval, thus is not easily seen in the figure.

Cape May Court House (Cape May) peaked at 60° on the 10th. The 11th found Piney Hollow (Gloucester), Red Lion (Burlington), Sicklerville (Camden), and West Deptford (Gloucester) at 63° and 18 stations from 60°–62°. Westerly winds on the 12th kept ocean-chilled air off the coast, permitting the temperature to rise to 66° at Atlantic City Marina, with Little Egg Harbor Township, West Creek (Ocean), and Woodbine each 65°, and 30 stations from 60°–64°. The 14th was the only day of the month where every NJWxNet station remained below freezing for the entire 24 hours, with the Atlantic City Marina, Lower Alloways Township, and Mannington the mildest at 30° and High Point Monument coldest with a 15° maximum.

A three-day stretch of mild conditions commenced on the 21st with Hammonton (Atlantic), Red Lion, and Sicklerville at 64° and 24 stations from 60°–63°. The warmth was centered over inland portions of the northern coast on the 22nd with Berkeley Township (Ocean), Holmdel (Monmouth), and Howell (Monmouth) each at 67°, Toms River (Ocean) 66°, and 40 stations from 60°–65°. The 23rd was the warmest day of February with Egg Harbor Township (Atlantic), Sicklerville, and West Creek all at 73° and 35 stations from 70°–72° (Figure 8). High Point Monument at 58° and Fortescue’s 59° were the state’s coolest highs. Statewide, the morning low was 22° at Vernon Township and High Point Monument, thus a 51 degree range from maximum to minimum occurred within NJ on the 23rd. 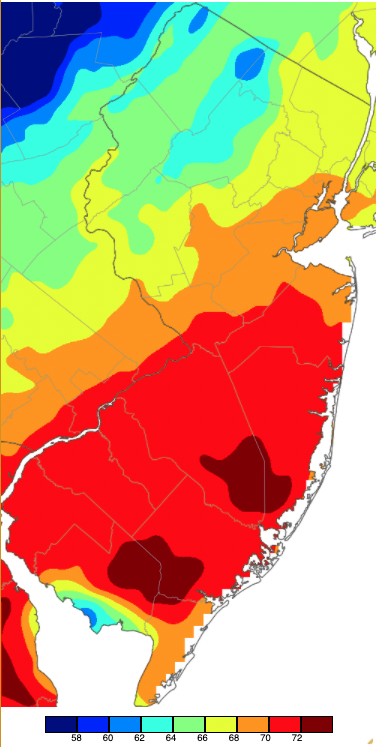 High Point Monument had high temperatures at 32° or colder on 14 February days. Meanwhile, six NJWxNet stations at or near the south Jersey coast had just one day, the 14th, with highs below freezing.

Seven February days saw the thermometer dip to 10° or colder at a WxNet station. The coldest low of the month was the -4° on the 1st at both Sandyston (Sussex) and Walpack. Basking Ridge (Somerset) was -1°, Hopewell Township (Mercer), Pequest (Warren) and Charlotteburg were each 0°, and 14 sites were from 1°–10°. Seaside Heights had the mildest low at 33°. Three NJWxNet stations fell to 33° on the 3rd, the lowest in the state and the only day this month when the freezing mark was not reached anywhere. Yet just two days later, the 5th found High Point (Sussex) and High Point Monument each at 6° and four station from 8°–10°. Sandyston and High Point fell to 3° on the 6th, with 11 locations from 4°–10°. 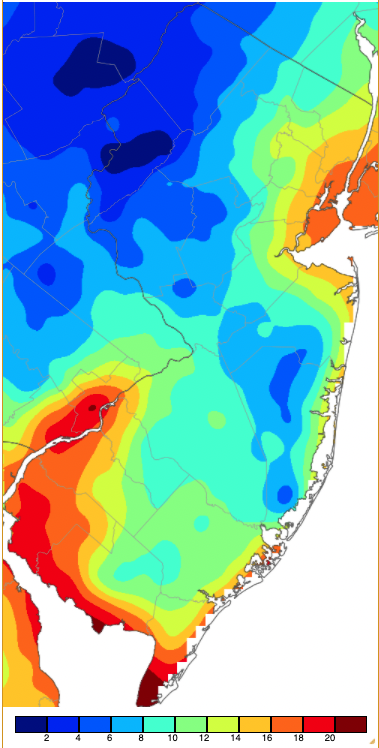 Figure 9. Minimum temperatures on February 15th based on a PRISM (Oregon State University) analysis generated using NWS, NJWxNet, and other professional weather stations. Note the in 2 degree increment scale beneath the map.

As colder air moved into NJ during the evening of the 23rd, a wide range in temperatures occurred from 32° at High Point Monument (not shown) to 67° at multiple south Jersey locations (Figure 10). 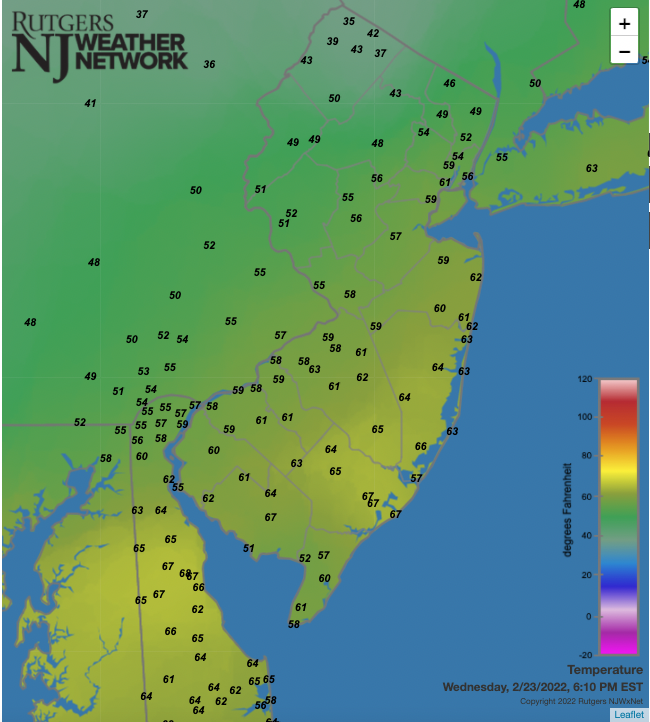 Figure 10. Temperatures across NJ and nearby states at 6:10 PM on February 23rd. Observations are from NJWxNet, National Weather Service, and Delaware Environmental Observing System stations.

With above-normal temperatures in December and February and a below normal January, the overall winter average of 35.2° was 1.1° above normal. This ranks as the 16th mildest dating back 128 winters.

The 6th driest December on record and close-to-average January and February conditions resulted in statewide precipitation averaging 2.93” below normal for the season. The 7.69” total ranks as the 18st driest winter on record. Central regions saw the most precipitation, with drier conditions along the northern border and in the southwest (Figure 11). Princeton (Mercer) with 10.13” received the most winter precipitation followed by Howell (Monmouth) 9.81”, Old Bridge (Middlesex) 9.74”, two Woodbridge (Middlesex) stations with 9.65” and 9.73, and Chester (Morris) 9.24”. On the short end was Buena Vista (Atlantic) with 6.63”, Folsom (Atlantic) 6.69”, Franklin Township (Gloucester) 6.74”, Ocean City (Cape May) 7.13”, and Woodstown (Salem) 7.20”. 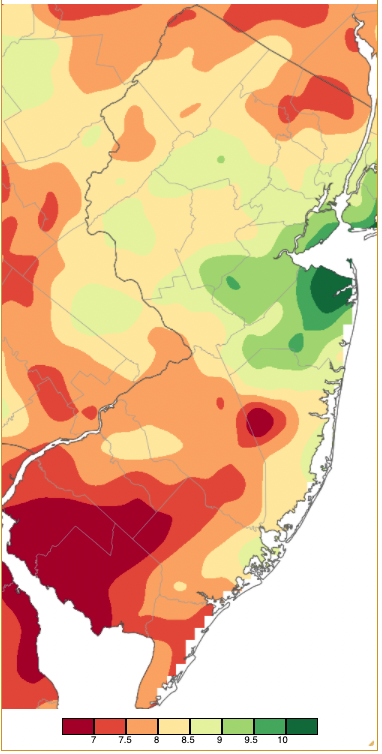