Latest News
In Sandy’s Wake: Revelation and Resilience After the Superstorm
State of the Climate: New Jersey 2021 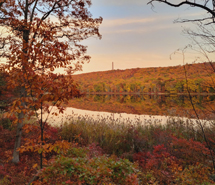