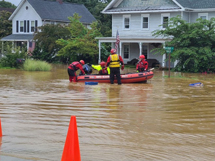 Whether the thermometer was reading high or low this August or whether rain was falling or not, one factor that most always had to be considered was the high level of humidity. The “Dog Days” of summer indeed. Of course, there was much else to consider this month, including contributions of rain from two tropical storms, one of which brought the largest crests on some rivers since May 1, 2014, 11 days where one or more locations received at least 2.00” of rain, and 16 days where the high temperature reached 90° or higher somewhere in the state.