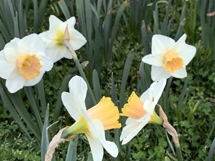 Daffodils chat with each other in the foreground on April 16th in Franklin Twp. (Somerset County), as two others eavesdrop in the background along with one that couldn't care less. Photo by Dave Robinson.

The good news is the rainfall that arrived quite often. Increasing concerns for drought encroaching on NJ were washed away by multiple storms that “performed” up to or exceeded expectations, something that was often not the case for multiple underperforming events in past months. Statewide rainfall averaged 5.10”. This is 1.40” above the 1991–2020 normal and ranks as the 24th wettest April since records commenced in 1895. As the monthly map shows, the northwest was wettest and south driest, yet still above normal. The north average 6.34” (+2.44”, 11th wettest), south 4.37” (+0.79”, 32nd wettest), and coast 4.09” (+0.54”, 42nd wettest).