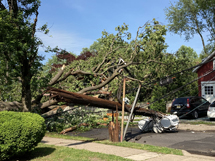 Strong winds from the June 3rd derecho took down a 190-year-old black oak in Haddonfield (Camden County). The massive tree totaled the home it fell on and caused a neighborhood power outage lasting around 72 hours.


Summer Arrives: June Recap (with a brief look at the first half of 2020)