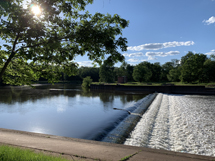 A weir immediately downstream of the confluence of the Raritan and Millstone rivers in Somerset County on June 16th, as taken from the towpath of the Delaware-Raritan Canal. Photo by Dave Robinson.