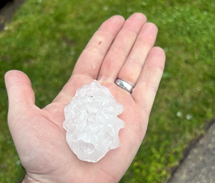 A large hailstone of approximately 2.5 inches in diameter from a severe thunderstorm in Cherry Hill (Camden County) on May 20th. Photo by Chip Murphy (@ChipMurphy).


Transition Complete:
May and Spring 2022 Recaps